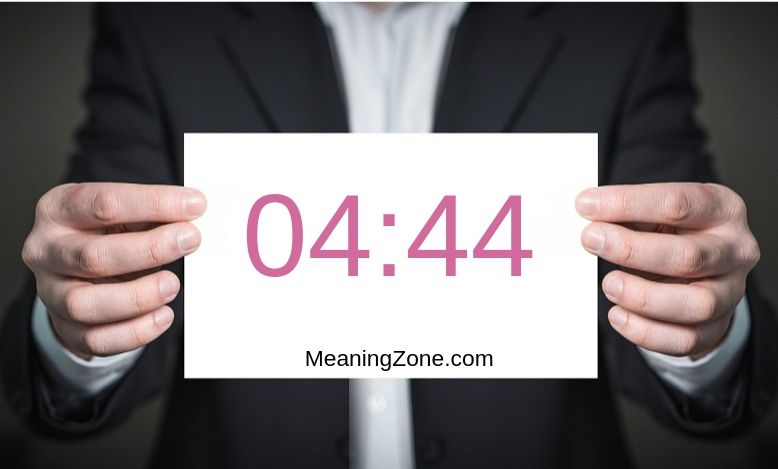 When numbers enter our lives, it is usually for a special purpose. They are hiding different messages behind them and are inviting us to discover what secrets lie hidden behind them.

Every number is special in its own way, and we can find meaning in the different messages they send us.

In today’s text we are going to learn more about the numbers 04:44 and what these numbers are telling us. Their goal is to send us advice about what we need to do in life and how to achieve it.

So, if these numbers are following you, here is what they mean.

The numbers are the basis of the language of the Universe. They are tools that we can use to create a relationship of understanding with our environment.

They can help us understand which direction we are taking.

Numerical sequences can provide important clues with a different message depending on which set of numbers you see.

The Symbolic Meaning of 4, 44 and 4:44. This series of numbers has its origins in the stability and deepening of ancestral roots.

Number 4 is related to home, stability and separation from the dark.

In our current way of life, stability often means money, so it can be an indication that your current efforts are linked to the increase in wealth.

The spiritual meaning of the number 4 according to Doreen Virtue is: “The angels are with you. They sent you the number 4 to tell you that they heard your prayers and that they are helping you.”

When the 4 is presented in double form, it is linked to the meaning of the number 8 which means abundance and prosperity.

Abundance is coming because of what is happening and your actions in your current life concerning your goal. The spiritual meaning of the number 44 according to Doreen Virtue is:

“The angels are giving you comfort, love and extra support right now. Ask for their help for anything and listen to their advice through intuition.” When the number four is seen in triple form, as 444, this refers to all the previous meanings and also to the number 3 which is related to truth and enlightenment.

You will receive wisdom and truth based on what is happening now. Because truth and wisdom are connected, this is why 444 is also seen as an angelic number, or a number of great power.

In numerology, the Master Numbers are presented with double and equal figures, 11, 22, 33 and so on up to 99. For Pythagorean Numerology there are two Master numbers, 11 and 22, for modern numerology include numbers up to 44.

From a research I did with Claudio Tavelli and described in the book “Numerology and Runic Shamanism”, thanks to Runes we have understood the meanings of all the Master numbers finding then found in famous people of the past that had these numbers in their Theos (numerological profile).

One should not be proud of having master numbers but, by becoming aware of them, put oneself in a condition of inner listening. It is useful to know that these are defined as the numbers of the test, and it will be precisely these tests that put those who own them on a path that leads them to become aware of them in order to fulfill their mission, put themselves at the service to implement change, as is the case for 33 to be a tool of dissemination, for the 44 it is to bring practices and techniques to implement rooting in Mother Earth.

The practice of rooting is centering and connection to support the vibrational changes that will take place in this temporal corridor that leads us to 2025, the entry into the Age of Aquarius. By that date it will be of vital importance to be present and energetically connected to our hosts, to become in harmony with this our Earth, the Change can thus take place in a less destabilizing way.

Being bearers of the Spirit in the matter, starting from becoming aware and responsible for the mission that we have come to accomplish and by now some signal we should have had, all the people who wonder why they see the double numbers, should now have understood it.

We also see that many astrological events fall on dates with double numbers or the celestial bodies are aligned to degrees of the zodiac that show double numbers, nothing is by chance!

But let’s come to number 44 the Shaman, what does a shaman do? What does it do if not the Earth and its community, the healer and harmonizer of Nature? He who knows the natural cycles of the Human Being and the Earth.

Connection between the Spirit and Matter, the Great Spirit and the Mother Earth. He knows the rites, the energies of living beings, animals, vegetables, minerals, it is with them that he works, he is a healer, first of all of himself and then of those who ask for his help.

It is no longer just that character that we know through the stories of ancient knowledge, today it is the one who works with the awareness that the living being as such should be considered as a unit-totality of body, mind and spirit, inserted in a given ecosystem, the holistic Operator or the Doctor of alternative therapies.

The Shaman is also who takes care of the environment, who cares about the environment in which he lives and protects thanks to his choices the continuity of the Earth’s resources, not exploiting, not polluting, trying to consume the products that the Earth produces nearby to him, not going to consume what is produced far away by using huge resources to get what is not destined to him by nature.

The 44 has a very high vibration to sustain but not impossible at this time of awakening and change.

“Be the change you want to see in the world” this intent becomes a way of being and living to relate with the Energies of the cosmos so that healing is carried from top to bottom, the Shaman, therefore, is the operative mediator par excellence, he that mediates and realizes interrelations between the higher dimensions with the Earth to realize the New Paradigm.

The number 44 is expressed in a person who loves to live in harmony with the physical world, can have a lending physical structure that comes from the four and a mental force brought by the number 8 which is the theosophical reduction of 44 (4 + 4 = 8), thanks to this it has a considerable energy.

The 44 has an innate practical sense, extremely connected with the Earth, in my experience I have been able to see that those who have 44 perform professions related to the environment, such as environmental engineers or farmers who adopt systems of natural and non-polluting crops, it is therefore innate a healthy and natural common sense and concreteness of the earth element.

The Shaman is gifted with great sensitivity and attention and matures his choices through the experiences of life, not infrequently whoever has 44 experiences in childhood some kind of discomfort that stimulates him in adulthood to seek the causes leading him to follow a path of inner knowledge that opens it to the mysteries of life, preferring not by chance, its intuitive capacity to traditional teachings.

When numbers 04:44 enter your life, this means you should be focused and find the goal to strive for.

This goal can be anything that is important to you, but the key is to push harder towards this end goal and to reach it in the end.

These numbers are helping you to realize the mistakes you have been making and how to stop making them in the future.

The sooner you understand the hidden messages behind them, the easier it will be for you. Number 4 is a strong number and it can give you the drive and motivation to achieve almost anything out imagine.

Numbers 04:44 is a powerful number that can give you a push in the right direction.

When the 4 is presented in double form, it is linked to the meaning of the number 8 which means abundance and prosperity.

Abundance is coming because of what is happening and your actions in your current life concerning your goal.

Connection between the Spirit and Matter, the Great Spirit and the Mother Earth. He knows the rites, the energies of living beings, animals, vegetables, minerals, it is with them that he works, he is a healer, first of all of himself and then of those who ask for his help.