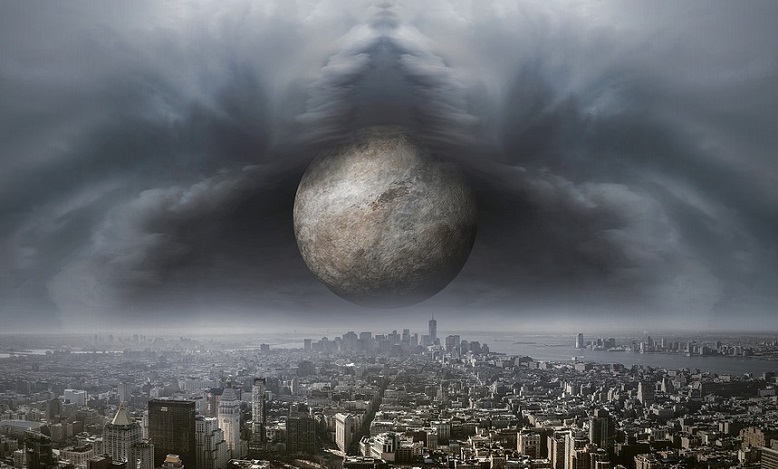 Theories are many different and for the end of the world various prophecies have even announced certain dates: A devastating meteorite impact, the attack of aliens or a gigantic atomic explosion should ensure that a normal life on the Blue Planet is no longer possible.

So far, however, none of the dates for the end of the world has come true.

However, there are still doomsday prophets and individual faiths who report that the apocalypse is near and the day of the Last Judgment is approaching.

But in addition to the watch, the dream world may also be threatened by the end of the world. If the dream image “end of the world” appears, then it is usually a very intense, depressing and frightening experience for the dreaming.

However, this dream image is not to be interpreted as an announcement for the actual downfall of the world.

Read in the following article, what meaning the dream symbol can have!

Dramatic events such as the end of the world in the dream world always indicate the psychic situation of the dreaming. When this dream image appears in sleep, it is common – but not always! – Serious emotional shocks the reason.

These dramatic experiences in the watch world, perceived by the dreaming as a “doomsday”, can be, for example, the separation of a partnership or great disappointments that have shaken the foundations.

Most of the dreaming is facing a fundamental new beginning, since his previous world has gone through these experiences so to speak. The realization that the previous path of life was the wrong decision can also be a reason for this dream image to appear.

What is important is that it causes the dreaming to think about his life and, if necessary, redesign it. In this case, the end of the world in the dream world contains the opportunity for a new beginning.

Sometimes dream research sees the end of the world as an important warning. In this case, the end of the world announces hostile struggles that can bring great danger to the dreaming. This interpretation is especially correct in the case of clairvoyant dreamers, that is to say, in persons whose dreams often come true and soon become reality in the watch world.

But even private problems in the partnership are announced by this dream image, such as when people come in the dream of harm, which the dreamer likes very much. Usually the dream picture announces a separation of the partnership, if not countered in time.

Psychological interpretation of dreams interprets the end of the world in the dream world as a fear of life in the world of the watch. If this dream image appears in the sleep, then the dreaming has massive problems and fears in the everyday life. He feels overwhelmed, insecure and helpless. The result is a constant downright “doomsday” mood, which also affects the dreams.

If this dream image occurs very often and becomes a kind of nightmare, then the dreaming should seek professional help and advice, in order to fight the causes and to find out from this negative mood again. With the end of the world, the separation of the earthly is interpreted in the spiritual dream interpretation.

The term Apocalypse is derived from the Greek word “apocalypses”, which means “reveal” or “reveal”. In all his wrath, his justice and his all-embracing love. In Jesus Christ, God’s supreme apocalypse is portrayed, for through it God is hurting man.

Natural disasters are increasing in intensity and frequency, often referred to as “apocalyptic” because of their terrible proportions. This development is frightening – one more, the other less. But even our subconscious mind can deal with the topic “apocalypse” and dominate our dream life.

In our dreams, an apocalypse can appear in very different ways, and it only gains its meaning through the feeling that one experienced in the dream situation. Floods, forest fires, earthquakes, tsunamis, all these can be apocalyptic events or feel like the beginning of the world for the dreaming.

The dream interpretation sees the dream symbol “Apocalypse”. If you are not wary and very careful, serious and serious consequences can occur. To dream of an apocalypse, however, can be symbolic of a new beginning. If one says, only when something old goes by, something new can arise.

If the person concerned is unclear here about what new beginning it might be, he should ask himself the question of whether he has perhaps already thought about making completely new career paths.

There may also be a feeling of dissatisfaction in the private sphere, and a desire for change, but it does not, as it may be too comfortable to stay in old patterns.

Here, the dream symbol “Apocalypse” can call him to action, encourage him to take the first step in the change and not wait for things to change by themselves.

From a psychological point of view, dream interpretation interprets the apocalypse as the anxious mood of the dreaming. He is afraid of life and as it were afraid, it is to lose and the requirements are not up to it. He believes the world is collapsing on him because he finds himself unable to bear the last of his life.

The dream image “Apocalypse” can also be displayed if in fact you just feel like you are losing ground under your feet. Life often demands a lot more than we think we can endure.

Sometimes terrible things happen in life that shake us so much in our very foundations that it actually feels like the world is going down.

The apocalypse in the dream can only be a transfer our unconsciousness, which real experienced situation to process try. In the spiritual sense, the apocalypse represents the power of the spiritual world and directs our gaze from the earthly to the metaphysical level.

In spite of what it may seem to dream of the apocalypse it is not very frequent although it is important to know its intrinsic meanings. The apocalypse is a topic widely used lately, either by the prophecies of Nostradamus, the Maya and other cultures.

But what is the meaning of dreaming about the apocalypse? The meanings of these dreams are very varied and complicated and we must analyze them one by one to better understand their origin.

In general, dream interpreters say that dreaming with apocalypse indicates the end of a period to start a different one. Neither for good nor for bad, is it only a time of transition or change.

However, it is the end of the stage can bring you anguish. In a way, all changes usually worry people. Leaving one stage of your life to start another is not so simple.

The meanings of dreams and their analysis depend on both the personal circumstances of the dreamer and the context of the dream. That is why you should try to identify which of the following interpretations best defines your current period.

You should also know that there are several types of dreams related to the apocalypse, the most common and recurring ones being the ones detailed below:

Dreaming of the apocalypse by invasion of aliens – These kinds of dreams are determined by the fear of the unknown, a fear that makes us think that anything that comes from outside is going to be harmful to us.

It is the inability and not knowing how to face problems directly, making them a true nightmare. Read more when dreaming about aliens.

We can interpret this dream as an agitation inside us or that we are about to take an unexpected turn in our lives. It can also be considered that we are experiencing a process of change, such as going through puberty.

Dreaming of the meteorite impact apocalypse – We are afraid of being hurt by a known or unknown person, to make us suffer in a newly started love relationship and that we still distrust not knowing it completely.

These types of dreams also usually occur in people who have recently suffered some type of spontaneous accident that they cannot overcome. You should know that dreaming about meteorites is quite frequent.

Dreaming of the nuclear holocaust apocalypse – It shows a clear concern and distrust of the leaders and politicians of the world who govern and direct us and that can lead us to extermination.

It is a lack of confidence in the extreme Humanity and that can take a bad run and attribute our mistakes to others. These types of dreams usually occur in socially isolated people who live alone.

Dreams of the end of the world are always associated with strong emotions such as fear, helplessness and panic.

After all, the end of the world is equivalent to one’s own death and that of the entire population.

Beloved people, pets, your own home, everything you ever owned is razed to the ground. There is no going back and no way out of this situation.

Therefore, dreams of the end of the world are in most cases perceived as extremely intense nightmares.

As frightening as dreams of the end of the world are, they are by no means pre-cognitive, as an allusion to a true apocalypse, but like most dreams associated with death, loss, and destruction as a fresh start.

This new beginning refers to the world of the dreaming, which was shaken by a very specific event.