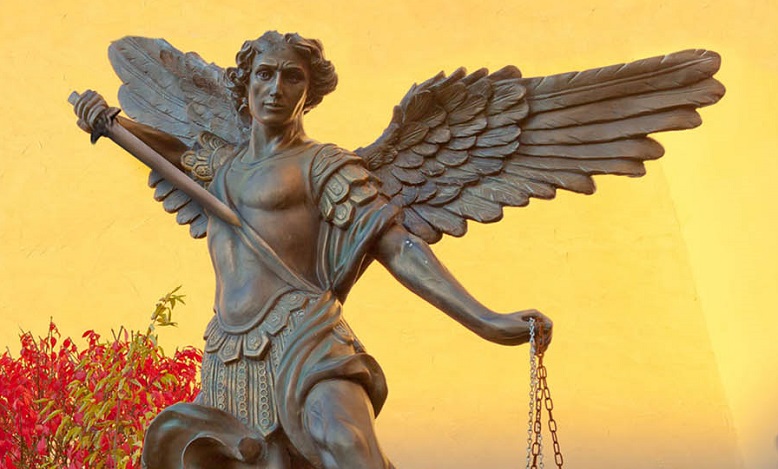 Both in Christianity and in Judaism Michael is revered as one of the four archangels – also at the very top of the angelic hierarchy stand with him only Gabriel, Raphael and Uriel.

But Michael takes a particularly outstanding position: For he is the leader of the heavenly hosts.

Anyone who picks it up against a dragon with seven heads and ten horns must be carved out of very special wood.

No wonder, therefore, that the Archangel Michael is represented from the beginning as a great and particularly courageous fighter. With a flaming sword he faces the forces of evil.

Even before the creation of the world, he plunges the fallen angel Lucifer from heaven into the abyss of hellish darkness.

Later, Michael becomes the leader of the soul: as in ancient Egypt Thoth or in ancient Greece Hermes leads Michael the deceased – to do so he keeps the soul scales on the way to a life after death. And one day the Last Judgment will break to the sound of the trumpets, to the Great Second Coming at the end of time, the greatest of all the archangels will also weigh the souls of the Risen One.

The name Michael comes originally from Hebrew – מיכאל means something like, “Who is like God?” In the legendary Qumran scrolls, Michael is also referred to as the ‘Prince of Light’.

The spectacular find is not long ago – because the ancient scriptures were discovered only in the period from 1947 to 1956 in eleven rock caves on the Dead Sea in the West Bank, not far from the ancient ruins Khirbet Qumran.

Over the centuries, Michael has been a constant source of inspiration for many people – and has therefore been portrayed by a variety of artists with recurring symbols.

The sword represents Michael’s courageous fight with the dragon and other powers of darkness. The staff, on the other hand, symbolizes the wisdom that distinguishes the highest of all the archangels.

The globe points to its great global influence: from the day of creation to the end of time, when the Last Judgment begins. Finally, the color red and the element fire underscore the glowing passion Michael has for his cause.

Michael is not only the patron of the Holy Roman Empire Nation, but also the patron saint of:

As the mightiest archangel, Michael undoubtedly has a very special meaning. He brings evil to its knees and helps the good and justice to victory. Michael is therefore worshiped not only in Christianity, but also in Judaism and Islam. And so, it explains itself that many churches in Europe bear the name Michael’s Church and the 29th of September to today is also known as Michael’s Day.

Archangel Michael is considered the most powerful archangel whose name means “Who is like God” (derived from the Hebrew ‘Mikha-el’). He is probably the most famous of all angels and archangels.

According to Christian tradition, it was Michael who saved Daniel from the lion’s den and the angel in the burning bush with whom Moses communicated.

So, he is considered a supporter and savior of dangerous situations and is known as such, as the most powerful and significant guardian angel.

Even after the dead Archangel Michael donates protection and gently carries the souls of the dead into the kingdom of heaven.

Michael is also known as Angel of Justice and Justice and is often depicted with two scales. In this capacity, he serves the truth and can lead us out of self-denial. He gently picks us up at the end of the path of knowledge and helps us deal with the found truth.

On Archangel Michael’s energy, we can focus if we want to strengthen the good in ourselves and banish darkness. Revelation names Archangel Michael as that mighty angel who plunged Satan out of the heavens to earth.

As such a powerful and powerful fighter, Michael’s job is to help us dispel bad habits, harmful thoughts and distress. He does not fight here instead of us, but with us and strengthens our inner light, helps with its purification and thus gives new strength.

He has always fought, for and against us against evil, and is fittingly portrayed with sword and armor. The sword of Archangel Michael is a symbol of the clear power of love in the sense that he is also called the “executor of God”.

Archangel Michael helps when we have lost sight of the sky. By his startling nature, he brings us back on track. This way back is never cut off and he always keeps it open.

His energy is clear and powerful, at the same time protective, enveloping and invigorating. Archangel Michael shows the way back to God and is the guardian of the divine order. As the prince of light, he connects us humans with our divine origin.

The sphere of influence of Archangel Michael is reproduced in many sources only in keywords. We ourselves would like to describe his field of application with examples.

Nevertheless, you should not be deprived of the buzzwords that are often used for the work of the Archangel Michael.

We would like to supplement this very abstract form of description with examples that make it easier to recognize our own situation in the themes of Archangel Michael.

The energy of “Archangel Michael” is used for example …

Many archangels are associated with an ascended master. As beings of light, they work together on their mission to accompany us on our journey.

Despite this alliance, each Archangel and Ascended Master remains a force of its own with its own powerful vibration.

Many of the light beings have a direct effect on certain chakras. The Archangel Michael Talisman activates and harmonizes Sacral Chakra and Forehead Chakra, and is particularly suitable for chakra work in these areas.

The healing color blue in the color radiation is in addition to other naturopathic accompanying therapies also an important therapeutic for climacteric complaints, because it reduces the unpleasant side effects such as heat waves, mood swings and extreme hypersensitivity.

The Archangel Michael is linked to the color blue. Also, in the color treatment of addictions, the color blue is used. Because addicts often lose their connection to their own center, to their soul, blue is used to promote the self-determination and self-empowerment of the radiation.

This is the basis before you can resist resistance to purely physical dependence. Because of its strong spiritual power and depth and the ability to better recognize intangible connections, blue should be lacking as a support in any addiction therapy.

As already mentioned, you can consciously include the color blue in your personal color design or choice of clothes. A light blue bedroom helps to relax and calm down, do not forget the blue sheets for nervous complaints.

For sensual accents you can provide with colored cushions. Children feel particularly well in light blue – in conjunction with pale yellow – rooms. Especially in the darker seasons, where the blue sky is often cloudy, the color blue creates a pleasant feeling, one remains in contact with sky and sea.

Having chosen this color in clothing can alleviate the above symptoms. It also always has a calming effect on the outside and gives the other person high sensitivity and stability.

Only when it gets too dark can it be taken too serious and depressing. Known is the assignment of blue to the property of loyalty.

The color blue was worshiped as a divine color. You hardly find them in nature. You can hold green leaves in your hand, but when you reach into the blue water and hold it in your hand it is transparent.

Just like the sky, in the whole blue, the air in front of you but simply colorless.

The production of the paint was discovered relatively late and was so elaborate that initially it was reserved only for the colonel of the company. Burial chambers in ancient Egypt, for example, were kept in blue so that their kings were closer to heaven and thus to the gods.