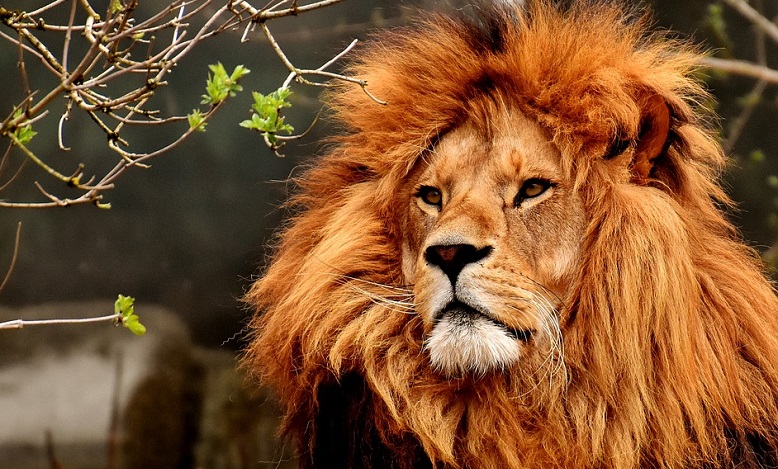 The meaning of the lion in dreams is linked to the predatory aggression that humans preserve in the pale brain as an animal heritage, but also to its royalty. A royalty that earned him the title of king of the forest or king of animals, royalty that derives from its power and strength, from the majesty of its bearing and from the mane that surrounds the head similar to a crown of rays.

The lion is recognized as a pre-eminent role, he owes obedience and submission. The lioness hunts for him, brings him the prey and he eats it first, thus reaffirming his dominant role.

The power recognized to the lion in the animal world symbolically approaches that of the sun, of gold and of the male divinities, to the paternal principle of authority and obedience. His image is present throughout ancient iconography to represent the sovereign and dispenser of justice or protection.

From the Egyptian solar lions to the Christian symbolism as an image of the divine nature of Christ, to the cultures of the Far east where, like the dragon, it protects from evil influences.

But in the meaning of the lion in dreams we should not forget the negative aspects: the ferocity and the instinct of a wild animal, symbol of despotism, exasperated authoritarianism, unbridled sexuality, strength and brutal violence.

Thus the lion in dreams can reveal the presence of instinctive energy, magnetism, physical and mental strength, intimate urges that need to be disciplined.

The lion is present in the façade of many churches, we often find it, in pairs, on the sides of the main door, above the architrave, with the gaze turned towards those who are about to enter the church. In some cases we find it trying to keep a man, a snake or another animal under control. It matters little if he sleeps or is awake, so much his vigilance never fails as shown by one of his “natures” described in medieval bestiaries.

It is thanks to the characteristics of his three “natures” that he becomes a representation of Christ, and this even if the various bestiaries give a description, at least in part, different. The first nature is that of knowing how to hide, in fact as soon as the smell of the hunter reaches him he is preparing to erase his footprints with his tail, just as Christ concealed his divine nature from the devil.

The second nature is that of keeping the eyes open and alert even when sleeping, just as the divine nature of Christ watched over when Christ was on the cross or in the sepulcher. The third nature concerns the newborns who are born dead and only after three days the breath of the father lion will give them life, just as God resurrected the Christ after three days.

If a man passes in front of a lion intent on eating and the man does not look at him in the face, the lion lets him pass without hurting him. But if the man stares at the lion in his face while he eats, he jumps over him attacking him. If a man meets the lion in the woods and kneels humbly before it, the lion gets to his mercy.

The photos on the right and left are from the Pieve dei SS. Cassiano and Giovanni. The lion seems to protect the lamb and it seems to me an interesting combination because the binomial represents very well the different “natures” of the Christ.

The lion (with wings or without) is also the main attribute of the Evangelist San Marco. In this case it is recognizable if it is found in a church dedicated to San Marco or if it is found in the company of the attributes of the other evangelists (eagle, ox, man).

The lion serves as a reminder of the beginning of the Gospel according to Saint Mark where we read of John the Baptist whose voice was like that of the roar of a lion in the desert.

In dreams the lion has a meaning almost always interpreted with a symbolism of positive value.

According to Jung the lion in dreams is an expression of the wild and untamed male forces that very often need to be tamed with intelligence and wisdom (to channel force into creative forms) as it appears in the tarot cards.

The lion in dreams as in reality is the king of the savannah, forest, of animals, is a symbol of courage, strength and nobility; represents passions, instinct and the unconscious from which we can be devoured.

One of many ways of saying that reflect a decisive metaphor and that in this case can be useful is to “fight like a lion” that can give a first and possible interpretation to the dream.

To give a correct interpretation of the lion we answer the usual questions: Who is the lion? Represents us; our inner self; or someone who tries to bully our territory?

Dreaming of a lion at home – ask yourself is it there to protect you or to hunt you. Do you feel good by his side or are you afraid?

Depending on the answers, the dream can be interpreted positively or negatively as anticipated above in the meaning of dreaming lions. Instead, for greater precision, I recommend reading the house in dreams.

Dreaming of a chasing lion – your instincts as the lions run after you, attack you, try to take over while you try to tame them, or, if they do not represent your unconscious, there is a person in your life who represents for you a lion who does not have good intentions towards you.

Dreaming of lioness attacking – of course what is said a moment ago about the lion is valid, the only difference can be given by the gender of the person who dreams or by the person that the unconscious wanted to represent for you under the aspect of the lioness.

Dreaming lions and tigers together – animals of great strength and power that can represent a pair of lovers or friends if in quiet cohabitation, on the contrary if they struggle they can be the signal of a clash between you and another person.

Without a doubt, however, they can be an expression of the instinct above all feminine.

Dream of a lion – it can highlight the life force of the dreamer, the courage, the nobility of soul, a natural leadership or the passion that can be revealed in love, in sex or in the drive towards life.

It can be a symbol of a furious rage in the face of obstacles, of the tension due to a conflict that the dreamer is experiencing or of a blinding and destructive passion.

Dreaming of an aggressive lion – it can represent the renegade aspects of the dreamer, the natural impulses that frighten him, with which he has no contact and which are pressing to be integrated.

Dream of a lion that bites the dreamer – connects to the above and clarifies the mechanism of removal of instincts and the different channels of expression in dreams and in reality.

Dream of a black lion – aggressive and fierce amplifies the removal of instincts: the dreamer will have to deal with his renegade instinctual drives or with an egocentrism or an exaggerated authoritarianism.

The black lion in dreams can also represent a person close to the dreamer, someone who scares him and blocks him with his stage presence and his willpower.

Dreaming of a dead lion – it can be connected to a physical exhaustion, perhaps depression, tiredness, lack of sexual desire, it can indicate aspects of rationality, order and control that are perhaps crushing the instinctive and passionate parts of the dreamer.

Dreaming of killing a lion – it is linked to the need to control instincts, to kill (transform, modify) the impulses of supremacy, sexual and aggressive that are becoming threatening to other aspects of the dreamer’s personality.

In particular, it shows the fear of the instinctive impulses breaking, in the face of the violence and aggression that the dreamer feels within himself.

Dreaming of lions will have a meaning and therefore an interpretation, either positive or negative, even if the lion rarely means something positive, but when it happens you will be proud of it because you will feel inside you all the positive things he represents and this will lead you to the realization of yourselves realizing what you aspire to.

Therefore, to dream of a good lion undoubtedly means what has just been expressed.