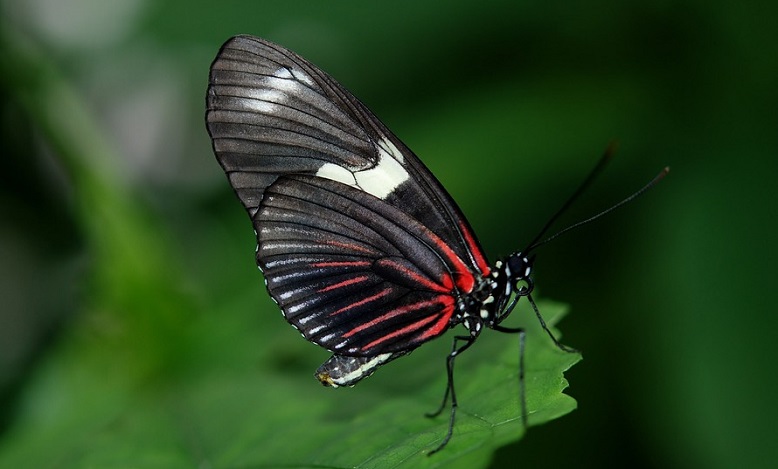 Today we are going to learn about the meaning of the color of the butterflies, myths, beliefs and opinions generated regarding their colors, sizes, drawings and even shapes. We tell you about their colors and omens. According to customs for a long time, if a butterfly accidentally crosses your path, this will be the cause of an omen, change or augury, related merely to the spiritual theme.

According to ancient religions, when you met a butterfly, it was a sign of a divine intervention that would bring good news and changes for your life. For the Greeks, seeing a butterfly meant seeing the soul of a person incarnated in this species. In this way, when they were seen, it was a sign that the dead wanted to talk to you or give you a signal.

It is probably from this belief that what we have until now considered to be the most important omen linked to this species: “to see a butterfly is the meaning of death”. From a more scientific point of view, the colors and shapes of the butterflies are due to many factors related to their habitat and way of life.

These characteristics refer to mechanisms of defense, mimicry and camouflage against their predators. Also, if the butterfly symbolizes a future change or transformation, its symbolism depends on the color of the butterfly. You have to pay attention on 3 different types of butterflies: black, white and yellow. White butterflies, black butterflies and yellow butterflies have a different symbolic meaning.

The meaning of the black butterfly

Many are the myths that surround the black butterflies or Ascalapha odorata around the world, either in Mexico (where they come from), Colombia, Paraguay and even Hawaii among other countries. The great majority of these myths are of “bad omens”, but how much reality is there in this? In this article we bring you information about these myths and the truth about this butterfly.

This species is Lepidoptera ditrisios of the family Noctuidae, the females reach to reach 17cm in length, turning them into the largest lepidoptera in northern Mexico. The females also have a strip of a pale color that crosses them from one wing to another, and despite their size, they are lighter than the males.

The males are smaller than the females, so they can be easily distinguished. Both genera are possessing marks in the form of a nine or a comma in the lower part of their wings. Although they are said to be black reality is different, their wings are brown with traces of purple and a little pink.

Like most members of the noctuidae family, this butterfly carries out its activities at night. During the day the butterfly rests and at night it flies, feeds and reproduces. Rest places, as reported by some people, are often garages, porches, and the houses of some people, this when they are in civilization, which is the most common. In a natural state, they look for dark spots in the sun, like caves or inside a tree.

During the day, these butterflies can get close to people, allowing photographers, collectors and lovers of lepidoptera to take a good photo and / or have an easy capture, this when they are interrupted from their rest and It allows flying during that period.

They can even stay in one place for a period of up to three days, although usually it is usually a day, even something even more interesting is that these lepidoptera have been seen to rest under people’s vehicles, even if it continues moving.

There was a report by Wayne Keller, who is a curator of the Grand Isle Butterfly Dome, where he reported that there were dozens of these butterflies resting under the elevated docks that led to the beach, this happened in June 2004.

Like the great majority of the noctuidae species, the Ascalaphas are attracted by the light of the houses, hence they are closer to civilization than to nature. These also feed on the wise of trees, rotten fruits in even alcohol. One particularity is that it is often confused with bats, since, when having nocturnal activities, they resemble these and through their flight it can seem even more so.

The first person who gave an opinion and merely scientific description about this butterfly was Carl Von Linné a scientist, zoologist, botanist, naturalist and is also considered as the father of the taxonomy. This was carried out in 1758.

Life Cycle of the Black Butterflies

The caterpillars of these butterflies can reach up to 7cm long, are darker than in adulthood, their color is brown and / or black, they have two lines that traverse the back of the larva.

They only feed at night, whose food is foliage, mainly mesquite, which is a legume plant, and during the day they hide in the bark of trees or in dark places using their camouflage as a defense method. During their adulthood they eat bananas, mesquite, juice from fermented plants, among others.

Migration of the Black Butterfly

The migration of the black butterflies is due to the rainy season in Mexico, which starts in the months of May and June and ends in the month of October. These migrate to the north of the continent.

The most impressive fact is that they can migrate considerably long distances for an insect, even over open water. They use in their migrations the oil plants that are in the sea as places of rest, which has been a great adaptation, perhaps they reach these by the lights they produce.

But what most people are interested in are the myths that surround this lepidopteran, since in many pre-Hispanic legends they are associated with death and bad omens. Many are the names that are given to this species of butterfly as: butterfly of death, butterfly of the country of the dead, butterfly of bad luck butterfly of fright, this only in prehispanic cultures.

In English it is called black witch, which means black witch, and even its scientific name have malignant connotations, since Ascalapha comes from the ascalaph demon originally from Greek mythology, which was the horticulturist of the god Hades. In Venezuela they are known as tara bruja and in Colombia only as witches.

They have a quite complex cultural history around different cultures, each one interprets them differently, but even so, all these interpretations have a negative meaning.

Another Mexican myth, is that they say that if a black butterfly flies over your head you will lose your hair forever. The names given to them in Colombia and Venezuela are not mere chance either. Here myths again play an important role, since popular culture thinks that they are the incarnated souls of witches or sorceresses who were not allowed to enter paradise.

Not all the sayings about the black butterflies are bad, in fact, in some cultures like in the Islands of the Bahamas or in some parts of Texas, it is thought that when this butterfly lands on you or it lands on the door of your house for a time you will win the lottery or you will get a large sum of money in a short time.

In Paraguay they are known as Ura, and here they have another belief about black butterflies. Here there is a belief among people that this butterfly bites, urinates and leaves its eggs on the skin of humans. The truth is that these insects are completely harmless to humans, they do not sting or leave eggs on the skin since it is not a parasitic insect. And if you have the belief that you have, scientifically it is an inoffensive animal which has only rested in civilization for centuries.

A fact that is still investigated about these animals is that they have been seen in the eyes of hurricanes, that is, they travel together with them. Many thought they had escaped from some shelter, but this turned out to be negative.

Although they have been reported in many hurricanes, most of the reports that were given about this strange event were during Hurricane Claudette in 2003 and Cindy in 2005.

The biggest threat to this butterfly has been the human being, although he believes that it is the other way around, and it is these same superstitions that make the human being believe that they are dangerous and kill them indiscriminately. Butterflies are the most beautiful beings of nature, so besides being envied for their grace and power of transformation, it is also considered as a spiritual symbol, to which different meanings are associated.

The meaning or symbolism of a butterfly is seen from a mythical point of view and the interpretations may vary depending on the geography, culture or the simple association that a person makes with an unusual event. This is why there are countless meanings associated with butterflies throughout the world and it is not difficult to find some that overlap or even contradict each other.

No matter what the culture or latitude, butterflies are a universal symbol of transformation and evolution in life. This process of metamorphosis that makes them capable of passing, of crawling to the earth to be enclosed within a cocoon, to then be able to fly free through the blue sky, is incredible. All human beings struggle to transform their lives and evolve like a butterfly.

Butterflies have been considered by many cultures as entities that can fly between the world of the living and that of the dead, due to the lightness of their flight. As they connect both worlds, it is also considered that they may be able to transport the souls of the dead among them. In Ireland around the seventeenth century, it was believed that white butterflies possessed the soul of innocent and pure dead children, so it was forbidden to kill them.

Tattoos on the skin with representations of butterflies are quite common, especially in women. Some choose it because they seem majestic and beautiful creatures, without any special reason.

However for others it is a symbol of freedom and transformation, which reminds them of a transcendent change in their life.

Symbolism of a Butterfly in a dream

Dreaming of a butterfly is almost always considered a good omen and usually means a new job opportunity, a new relationship or a new beginning.

Only when the butterfly appears consumed by darkness in the dream is it a sign that something bad can happen.

Meaning according to colors

Associated to the colors and the forms that the wings of the adult butterfly’s exhibit, one finds the greatest number of superstitions or beliefs.

The black butterflies are the ones that have had the worst part, since they are considered witches, advertisers of bad omens and even death. When a butterfly of this color enters a house, it is usually believed that this is a sign that there will be a period of bad luck or a close death in the family.

Brown or brownish butterflies, depending on their type, can also announce an illness or disgrace to a loved one or a close relative.

White butterflies are considered pure butterflies and therefore symbols of good luck and prosperity. If at the beginning of the year a person crosses with a butterfly of this color, this predicts that it will have a very good year. Blue butterflies also share this meaning. In the same way, when a large butterfly flies into a house, this is a sign that it will receive a pleasant visit.

Meaning of Butterflies in science

Butterflies are considered in Chaos Theory, which is studied in different branches of science, to explain the sensitivity to the variations that dynamic systems have. In this way, reference is made to how, despite being insects so small and fragile, they can generate a considerable effect.