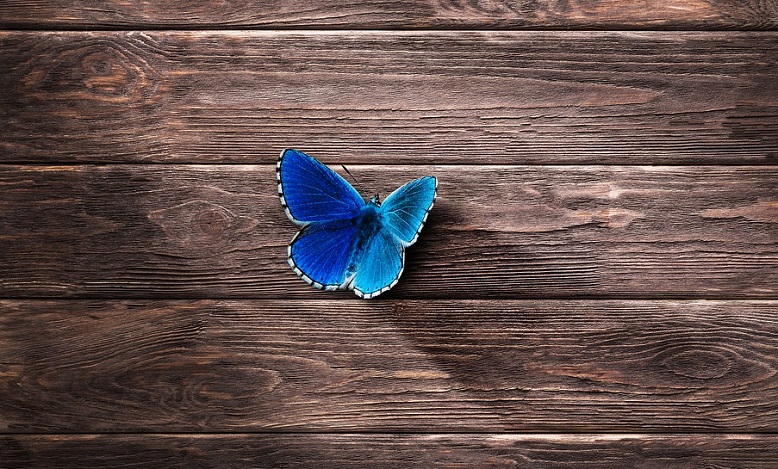 Butterflies are beautiful and gentle creatures that had a strong symbolic meaning since the beginning of time.

People were fascinated by their beauty and grace, and they have been a constant reminder to us, that everything that is beautiful doesn’t last long.

In today’s text we will take about the symbolic meaning of butterflies and the symbolism behind seeing or dreaming about a blue butterfly.

So if you wanted to find out more about these gentle creatures or learn what blue butterflies represent, keep on reading.

Between colors and nature we will discover so many surprises and curiosities ready to flutter. In the Greek myth Psyche, the most beautiful of the three daughters of a king, was represented with butterfly wings: the motivation is to be found in the fact in the meaning of the word Psyche which, in Greek, means both soul and butterfly.

In northern Europe, seeing a butterfly fly at night is intended as a harbinger of death. In Britain, superstition holds that, to obtain a favorable year, it is necessary to kill the first butterfly you see. In Scotland and Ireland, seeing a golden butterfly in the vicinity of a corpse is a wish for eternal well-being for the loved one.

Superstition varies according to the color of the butterflies. If the first butterfly to be seen in the morning is yellow, a disease is coming. If pink, it indicates life-long luck. If it is white, instead, it announces luck (in contradiction with other superstitions that support the exact opposite).

In the Native American prairie populations, the butterfly represents the strong and fetishistic animal of development because, belonging to the holy people, it can pass through different stages until it can fly in the air.

Always according to these cultures, the butterfly, as an animal totem, is able to teach man that the principle of metamorphosis holds its precise order. If man is able to follow the order of the Great Spirit, one day he will be able to dance gracefully from flower to flower in the light of the sun, just like a butterfly. In Maryland (USA), if a white butterfly enters the house, it is said that those who see it will die. In Louisiana, the same thing is instead considered a good omen.

The Zuni people of New Mexico believe that when white butterflies are seen, one should expect the arrival of heat, while, if they fly south-west, rain. As a talisman it is able to patiently tolerate things that seem seemingly superfluous, to enjoy beauty and to consider changes as important.

Even in the interpretation of dreams, the butterfly symbolizes transformation: dreaming of a black butterfly heralds problems that may concern close friends.

The blue of the lakes and seas is a color of depth. This blue is associated with the life-giving principle, the feminine. Life originally started in the water, everything living is dependent on the water.

The blue of the sky, on the other hand, symbolizes the distance, the divine, and the spiritual. The sky blue is the color of the sky gods, it was already linked in ancient ideas with the male.

If you give away flowers like forget-me-nots and violets or if you give a bridal bouquet with tiny flowers of blue honor, you point out the fidelity. In the romance, the blue flower was a symbol of yearning and the search for one’s own personal happiness. 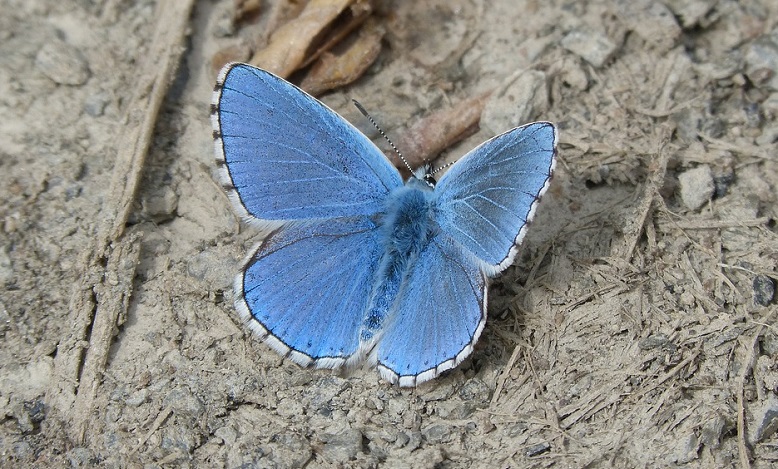 In ancient Egypt, the blue lapis lazuli were said to have life-giving properties. Mythology reports in the ancient Egyptian Book of the Dead of Horus, the falcon-like son of the god Osiris, who fights evil. He then appears in hawk form in the sky and “his head is made of blue stone”.

The Egyptians invented the pigment Egyptian blue and also the blue glass Smalte, which served together with the lapis lazuli in statues and coffins of the pharaohs to represent the eyes, hair and crowns.

Egypt’s most important river, the Nile, is also always depicted in blue on ancient Egyptian tomb paintings. Blue hippos as handicrafts were in great demand as a symbol of the life-giving river. In tombs there were unclothed female figures covered with blue glaze, which can be understood as a symbol of creation and as a renewal of life.

In Egyptian temple rooms, the sky depictions on the ceilings illuminate intensely blue and carry yellow stars. The blue is the color of the cosmos, the course of the sun and the stars in the sky, which at the edge merges with the blue of the oceans. It is the color of the backgrounds in the representations of the royal tombs in the Valley of the Kings. The headscarf of the kings and the royal insignia crozier and fronds are striped blue-gold.

The jewelry of Tutankhamun consists of gold and lapis lazuli. In Egypt, the pharaohs were considered sons of the sun god Rê, who personified the highest deity and was associated with the color gold. Gold was like blue as the color of the divine, the gold mask Tutankhamun is made of 22 karat gold.

Butterflies, during the ages and in cultures, have become a metaphor of inspiration in complete metamorphoses as also happens in the passage from life to death, becoming also a symbol of the dead and of the Avi, this happened because of the phases that it must go through changing shape becoming finally a fantastic butterfly.

The process that the butterflies go through is an evolutionary cycle that describes the evolution of the soul, in fact the human soul completes a cycle very similar to that of the butterfly.

Butterflies tell us about impermanence and the fact that life continues even when a cycle or situation ends, all things grow, evolve and change, this is an inevitable cycle of life that butterflies symbolize perfectly. Photographic butterflies puzzle When you want to make a tattoo with a butterfly as a symbol, I always remember Psyche in the Greek myth where, in the legend / myth of “Psyche and Love” written by Apuleius, where it is used as a symbol of life.

In reality the word “psyche” translated means “breath of life” furthermore Psyche, in the Greek myth, is the companion of Cupid-Eros-Love. All these symbols go well with the symbolism of ephemeral butterflies as well as concepts such as love, intuition, peace, adoration and beauty, all of which are special conditions that are now there, not long after.

Until the advent of synthetic dyes, the color of clothing was not a matter of taste, but a matter of money. However, unlike the other colors like purple, blue was easy to dye. The most important dyestuff for dyeing was India-derived indigo or the slightly less intense domestic dye dwarf dye. For the preparation of the dye, the leaves of Dyer’s were fermented in containers with human urine.

The addition of alcohol increased the fermentation process. Since alcohol was expensive, the dyers drank a lot of alcohol, which was then enriched in urine. For dyeing the fabrics they were immersed in the dye bath for at least twelve hours.

However, the blue color on the textile pieces did not arise until they were hung in the air for a long time. The statement made in certain literature references that the stewardesses drunk every Monday waiting for the result of the dyeing and therefore the term “Blue Monday” or “Blue Things” in the meaning “away from work” emerged, has proved to be incorrect on Monday, work was normally done normally.

The butterfly that appears in dreams is a symbol of a transformation that takes place on a psychic level, of a change that is occurring in the life of the dreamer, of a passage from one phase to another.

The butterfly has to face different growth phases: from a chrysalis gradually gaining access to a higher level of maturation up to the last stage that allows it to hover in flight. The metamorphosis of the butterfly is fundamental to understand its symbolism.

Its appearance in dreams suggests an evolution in some areas of the dreamer’s life and access to new experiences with a different awareness, which derives from having faced previous phases, and with a maturity that is the culmination of energy, of autonomy, of potential.

On the other hand, the butterfly, participating in the ethereal element of the air, is directly linked to its spirit character and is associated in many cultures with the last breath of life that exhales the deceased, or with the soul that becomes visible, for this reason it can easily be connected to spiritual and research implications in this field, to the vital breath that sustains the human being, to the soul that manifests itself.

Just as it can suggest the dreamer’s ability to proceed on his own path, to progress at times with lightness, pleasure and ease, sometimes with a little superficiality and inconstancy without worrying about responsibilities or commitments (think of when a person gets he says that “farfalleggia”) or again, he can urge him to “see” the beauty and potentialities present in him and let them express.

It is basically a signal of transformation and rebirth. In Japan the butterfly is a symbol of women for its grace and beauty, and its movement in the air is connected to the various manifestations of femininity, coquetry and sensuality.

Especially in places where the female sexual organ is given the nickname of a butterfly, this symbolic aspect can be found in dreams, directly linked to pleasure and sex, to indulge without too much meditation, to “flutter from flower to flower”.

Dreaming of dead butterflies – Butterflies undoubtedly give the idea of ​​lightness and freedom, dreaming of them dead could presume that something in your life is changing, obviously you are facing important changes in your life that lead you to no longer have the freedom of a time, the time has come to become adults and leave the frivolity of youth behind.

Dreaming of a giant butterfly – can symbolize your feeling inferior to some kind of situation that you are experiencing, or to a person who is hanging over you that somehow hinders and deprives your freedom and makes the life path you are following difficult.

Dreaming of colorful butterflies in the home or away from home –this is certainly a good sign, many new features for you, occasions and positive events, in fact, the house in dreams represents ourselves, our life, our state of mind that in case of this dream surely symbolizes serenity and also a little lightness in life, which we can occasionally grant ourselves.

Dreaming of a blue butterfly –  In the world of dreams, dreaming of a butterfly or more blue butterflies is certainly not a good sign, likely negative events are about to knock on your door or you obviously have many worries or people that you don’t want to hear about, as we have already said the butterfly remains an insect, which is why, even in dreams it can cause some discomfort, it is also true that the butterfly is a very weak insect and has short lives, therefore thoughts, and problems will surely be transient and easy to resolve.

Dreaming of a white butterfly –  the white butterflies in dreams undoubtedly give your spirit and your soul a state of purity and innocence reflecting your feeling complete and fulfilled in a spiritual and physical path that you are or have faced.