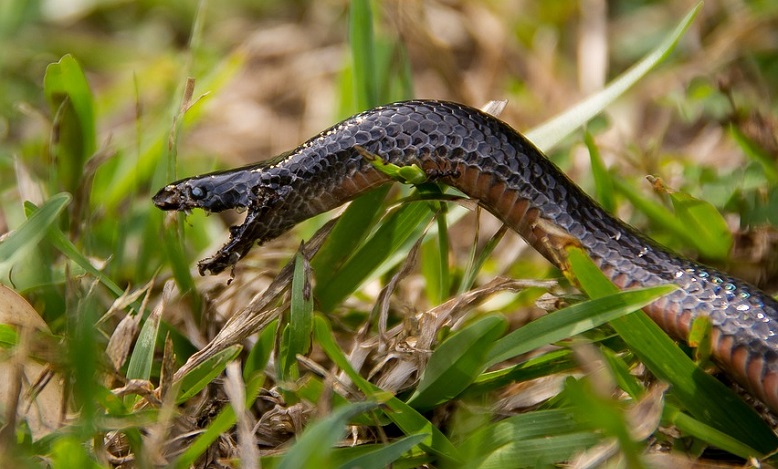 Dreaming of a snake is one of the most frequent dreams of all, the most common of those with an “animal” theme.

In many people the snake arouses fear and disgust, if not a real phobia, so much so that it cannot even bear the sight of it.

On the contrary, other people love snakes very much and look after them as pets. This should be taken into account when interpreting the dream.

Snakes are certainly dangerous animals but, as much as they may worry us, it cannot be denied that they are also haunting creatures, endowed with almost hypnotic charm.

The snake is a reptile, a cold-blooded animal that moves crawling on its belly and that changes skin periodically (mute). It is present in many myths and legends of every part of the world linked to the concept of rebirth; often, in many civilizations of the past, it was the object of worship, and custodian of oracles (such as, for example, the oracle of Delphi). In India there are still temples dedicated to him.

In Western culture, following the establishment of the Christian religion, the serpent has assumed an especially negative meaning, connected to the idea of ​​sin and deceit; but the snake has an ancient symbolism, very rich and fascinating, which is intertwined with that of dragons and sea monsters like the Leviathan.

According to the popular saying, dreaming of a snake is bad in many cases, except if you kill it; it is said in particular that dreaming of a hissing snake announces the death of a family member; then, according to some, being bitten by a snake is a good sign, for others it is a bad sign. symbol of the snake is one of the most ancient and complex symbolisms of human history: it refers to the primordial aspects of the psyche, which bind to a type of brain called reptilian, or the first evolution of the central nervous system, typical of reptiles and home of primary instincts and basic autonomous body functions, such as defense of the territory, attack-escape, mating.

The most archaic animal part is considered, an expression of primordial instincts and aimed only at a personal satisfaction, in the total absence of emotion or moral conscience.

According to Freud, the snake is one of the typical dream images that represent the penis.

Jung, on the other hand, interprets it as an expression of an inner conflict between conscious and unconscious, reason and instinct

Dreaming snake sexual power, fertility, force of nature that allows the perpetuation of the species. This meaning linked to sexuality can also be recognized in the biblical narrative of Adam and Eve: the serpent is a symbol of sexual pleasure, of the freedom of one’s body, and also of the mind (knowledge).

Wisdom, inner psychic energy that allows rebirth, renewal, physical healing, but also spiritual well-being and enlightenment. The snake is a symbol of medicine and health common to many cultures around the world: for example, the snake is present in the staff of Asclepius (symbol of medicine); two twisted serpents surround the caduceus of the god Mercury, the messenger of the gods, a mediator between the human and the divine.

Dreaming of an aggressive, threatening snake (like a rattlesnake, a viper, or other poisonous snake) that sticks out its tongue and hisses, indicates that there is some danger that you have not yet realized.

It can also represent the aggressiveness that you yourself cannot express, to pull out; you should talk more, spit “the poison”.

Finally being bitten by a snake can also have a very positive meaning of physical or emotional “healing”: the poison, in this case, is to be understood as a “serum” that heals you.

It often happens, in dreams, to see so many snakes; maybe they are small and thin, but they are everywhere, they crawl everywhere and make an impression. It is a dream typical of wary people, inclined to see other people as “enemies”.

It can also occur in a period of confusion, uncertainty, doubts, fear of one’s impulses.

Dreaming of a snake that strangles, crushes, squeezes – Snakes that hold their prey in their coils, such as boas, pythons, or other large and large snakes, recur in the dreams of those who are repressed (even in a sexual sense); maybe you’re too scared to let yourself go, you always want to keep everything under control.

If you dream that another person is gripped by a snake, it indicates that you are apprehensive about her.

Dreaming of a snake that changes skin – An inner change is coming, a new vital impulse. In ancient Egypt the snake was a symbol of immortality precisely because of its characteristic of changing skin. It was believed that the snake, after having changed skin, could no longer die, if not of natural death.

Dreaming of a snake in the house, in the bed – The snake, as we have said, is a sexual symbol: it represents the penis, or, with its sinuous movements, feminine sensuality. Seeing him in a dream, especially in the bedroom, in the bed, or under the bed, can depend on concerns related to sexuality: fears, feelings of guilt, desires, and (for man) need to affirm one’s sexual power.

Dreaming of a snake at home, on the roof, on the ceiling, or in a room, can represent a threat that looms over our private and intimate life; could be our enemy; but if the snake is hiding, it runs away, all this negativity is moving away from you. Seeing a snake crawling in the dream suddenly appear inside the house can be a manifestation of unconscious psychic energies that burst into unpredictable ways.

Dreaming of dead snake – Dreaming of a dead snake, cut to pieces, with its head cut off, or dreaming of killing a snake can indicate the end of negative influences and distressing emotions in your life; however it can also indicate the loss of instinct.

Dreaming of still snake, quiet snake – Dreaming of a snake and not being afraid because it is good, it does not bite, it is a good sign. A steady, calm snake coiled on itself is an image that represents your psychic energy ready to relax, to awaken.

The image corresponds to that of Kundalini, the coiled serpent which, according to Hindu philosophy, represents the dormant energy within us, which can be obscure and maleficent until it is mastered, but which can make us divine if we can awaken it and tame it.

Dream of a snake bite on the hand – Anyone dreaming of a snake bite should probably be prepared for professional problems. The creator’s urge and skill may be thwarted by various obstacles that he must first overcome. A dreamed snake bite in the left hand indicates minor complications, but the dreaming person will probably survive well.

Dream of a disfigured face by the snakebite in the dream – The dream of the snake bite in the face points out to the dreaming that his self-image may be questioned by people in his environment. It is also conceivable that his good reputation is in danger. The dreamer should ask himself how he affects other people and whether he is satisfied with this external perception.

Dream of being bitten in the back by a snake – When dreaming of the snake bite in the back, the dreaming person must be well prepared for the fact that her close people will probably let her down if she is in a dangerous situation.

Therefore, it is advisable to avoid possible dangers from the beginning.

The snakebite on the leg – A dream event in which one has experienced a snake bite in the left or right leg, the dreaming person points to possible frauds that could occur in their environment. She should be extra cautious and suspicious when strangers make her big promises. She should also be wary of seducers.

Dreams of the snakebite on the feet – The foot stands like no other part of the body for the urge to move and the advancement of man. A snake bite in the left or right foot signals to the dreaming that his mobility may be limited in the future.

On the one hand it can be an actual foot injury, on the other hand, however, the professional advancement of the dreamer can be hindered by various circumstances.

Dream Symbol “Snakebite” – The general interpretation – Who is bitten in the dream of a snake, which is possibly also poisonous, should be careful in the near future. His honor threatens to be violated, which could lead to a major loss of his reputation. The dreaming should definitely try to avoid complicated situations and give others no reason to question his behavior.

In addition, he should protect himself from intrigue. It is possible that a woman in the person’s environment is planning to deceive him insidiously.

A snake bite can also include a warning, not to be easily influenced by others and get on the proverbial lopsided path. While it is quite possible that others may cause business losses for the person concerned, they should nevertheless remain true to their own values ​​and stoically accept these losses. Only then can better times come again.

Symbol of the snake is one of the most ancient and complex symbolisms of human history: it refers to the primordial aspects of the psyche, which bind to a type of brain called reptilian, or the first evolution of the central nervous system, typical of reptiles and home of primary instincts and basic autonomous body functions, such as defense of the territory, attack-escape, mating.

The most archaic animal part is considered, an expression of primordial instincts and aimed only at a personal satisfaction, in the total absence of emotion or moral conscience.

The image of the snake in dreams inevitably binds to an idea of ​​danger, which can derive from someone close to us (as well as from a disowned part of ourselves) that we do not trust, that sneakily creeps into our lives and from which we cannot defend ourselves.