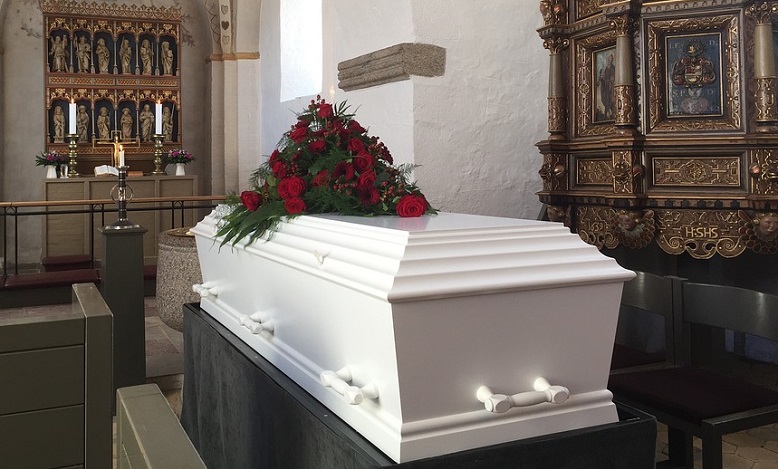 Meaning of the coffin in dreams recalls the image of an “inner warehouse” in which all the things that have been part of life rest, which have contributed to the growth and construction of the personality, but which are now outdated and of which the unconscious , showing them inside the coffin, it offers an eloquent and unmistakable image.

The article presents the symbolism of the coffin in Western culture and the meaning of the most frequent dream images.

Dreaming of a coffin is linked to the symbolism of death and to all the symbolic images of ritual and tradition: funeral, cemetery, tombs and, like all these symbols, alludes to the end of something, to a closure and to detachment from what is now useless, harmful and no longer recoverable.

The coffin welcomes the human body after death, it is a cramped and dark container mostly associated with the fear of separation, the loneliness and the anguish of finding oneself buried and closed in a coffin still alive.

An anxiety that is fomented by stories and films, but that seems to have its own privileged space among the fears inscribed in human DNA.

The coffin in dreams for its container form has many similarities with the receptive energy of the earth, of the cradle, of the maternal womb, of the bed, of the boat and of any other space that has the task of welcoming the human body into its moments of fragility, of tiredness, of change and in this case of “end” of physical life which in dreams always corresponds to the end of a cycle.

So dreaming of a coffin alludes to the end of a situation, to the end of a feeling, to the closing of a phase that must become “past”, to the need to forget and to give “worthy burial” to the aspects of one’s existence that no longer have any reason to be, which are obsolete.

But dreaming of a coffin often represents the lack of this “worthy burial” and the need to elaborate memories and completed experiences to finally “close and bury the coffin”, which corresponds to “burying the past” that is leaving it behind and prevent it from affecting the present.

The coffin in dreams is an object rich in meaning. Very commonly linked to death, it can take on a large set of symbols and often represents the end or separation from something or someone.

What does it mean to dream of a coffin? The coffins can indicate closure, not only with the past, but also, in ourselves or with someone we know, this closure can often be psychological, mental or physical, and naturally refers to our behavior.

Dreaming of an open or closed coffin – a casket generally open, is ready to welcome something (or someone) and is a symbol of the moment of transition that exists between us and that something / someone to which we were tied. If we dream of an open coffin and see that we are at a funeral: this will also be symbolic.

In fact, the funeral is the representation of the end of something that was very important to us. It represents a particularly difficult gap.

Dreaming of a closed coffin – on the other hand, indicates the end of something that we have now overcome or we are still tied to the past but we are aware that there is no more way to go back and we are ready to accept it and overcome things.

Dreaming of an empty open coffin – if we dream of an open and empty coffin, we must ask ourselves what it that we must close ourselves inside is. This means that there is something about our past that must be put aside and the time has come to move forward.

Often the coffin can also indicate the end of a relationship, so if it is empty inside it is ready to host someone we know, with whom we are no longer on good terms.

Dreaming of a coffin with dead, dead, full – as we have already said, the coffin is a symbol of separation and rupture; perhaps our subconscious had not yet fully accepted the disappearance of that loved one if we know it; if we do not know it, let us ask ourselves who it is and who it can represent for us.

Dreaming dead in the coffin that resurrects depending on whether or not you know the person may represent your desire to see the person you relive, as it is possible that you miss them.

To dream of a coffin with a living person – wants to point out that our relationship with someone is not the best; dreaming of full coffins may refer to someone with whom we have serious problems or who is part of our past and who sometimes we think about again.

Dreaming of people we know inside the coffin – for example, dreaming of a partner or our parents, dreaming of a father or mother in the coffin, can also indicate a very fragile relationship and that we are ready to completely sever if it is our partner; naturally the fear of their death is not excluded.

But the coffin can also be a symbol of this person’s difficulty in opening up with us.

If we feel that someone is behaving in a hostile way towards us and that he remains closed in himself, then it means that he is “moving away” from his own will. It is up to us to interpret the dream, depending on the type of relationship we have with the subject inside the coffin.

Dreaming of your own coffin – can take on different meanings, but the questions to ask yourself to solve the interpretation are so many; is the coffin open? Closed? Do we feel free? Is there something that oppresses us? Are we afraid of death? Are we really going to die? Do we love each other enough? Do we feel alone? (Find out more about death by looking in the book of dreams).

Dreaming of a glass coffin – stained glass, windows or glass objects in general are the symbol of a strong detachment from the outside world. They express the desire for solitude and alienation on the part of the dreamer. Dreaming of a transparent coffin may want to indicate the strong detachment with everything that surrounds us.

However, glass is not an immediate detachment, as light passes through it and we can see what happens in the surroundings. Maybe we just need some time to dedicate to ourselves; the coffin is an excessive image, but it still refers to the spiritual world – it might mean a temporary departure to seek our inner self, thus obtaining a rebirth later.

Dreaming of wooden coffin – wood is a material that brings us closer to nature; all that is wood gives us a certain tranquility and is a symbol of good taste. Wood, like the coffin, can also express sexual stiffness. If the coffin is a symbol of a mental block, wood is a symbol of little interest in the partner or in the relationship with it.

Do not forget, however, that 90% of the coffins are made of wood, therefore, it can also be considered as a non-particular of the dream.

Dream of small coffin – it is clear that it is for someone small; it is up to us to understand if this dimension depends on how we see a person, and therefore as a characteristic of the personality, or if it reflects the physicality, for example, we can say that this respects you can dream of a child’s coffin that we go into a little further down with the white coffin.

Dreaming of colored coffins – the colors, in dreams, can hide various meanings depending on the object to which they are “linked”.

As we have already said, the coffin tends to indicate separation from someone or something, even from some feeling or emotion that can be represented by a color.

Dreaming of a coffin at sea – reflects contents of the past that perhaps must be explored, revised, elaborated before being definitively buried.

The coffin in the sea in dreams can indicate the power of the unconscious that brings to light what is necessary to see: aspects of the past that have not received adequate burial and that perhaps drift lost in the emotions of the present.

If the open coffin is empty, it is possible that the subject is experiencing a period of confusion, pain and difficulty but is unable to focus on the causes or is looking for a culprit for this illness.

If inside the coffin we find a living person, it means that in daily life someone torments us and we would like to re-bind him in the coffin.

The closed coffin, on the other hand, indicates that something is finished but has already been metabolized.

The subject knows therefore that one cannot go back, but remains anchored to the memory of the person and of the period.

If the closed coffin magically reopens because the contained person is alive, it is possible that the subject suffers the lack of someone and does not see the time to hug her again.

If the coffin is present in the context of a funeral, it is possible that the subject is still metabolizing the death of a loved one and wants to find in the dream a comfort or a point of contact with the deceased himself.