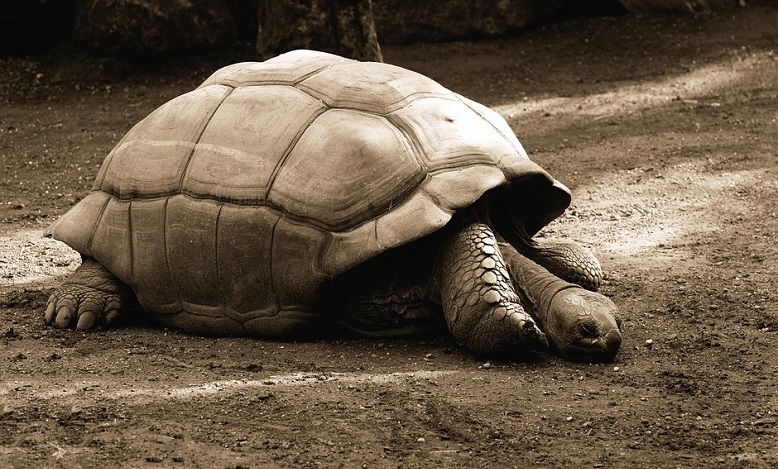 For many people, the tortoise is a sacred animal, a symbol of success and prosperity, not only in its own dream subconscious, but also in popular belief. An animal for many, good luck, a real fortune.

Have you ever dreamed of turtles in your dreamlike digressions? Here is what the meaning associated with your dream could be.

The turtle is the animal symbol of slowness and this characteristic accompanies it even in dreamlike visions.

But to dream about turtles, exactly, what does it mean? The meanings change depending on how the tortoise looks, but in general it symbolizes the slow evolution of a precise situation or relationship; the animal itself, on the other hand, represents longevity, prudence and wisdom.

In dreams there is no difference between terrestrial turtle or sea turtle: the meaning is the same and to determine it is how the tortoise we see looks or does.

Dreaming of a dead turtle is a kind of warning, which can invite you to think carefully when making an important decision; in some cases, however, it also represents introversion and isolation from the rest of the world.

If, on the other hand, an “aggressive” turtle that attacks or bites has appeared to you in a dream, it symbolizes prudence: in fact, the turtle opposes something you are about to do and wants to warn you of possible negative consequences.

A dream that can be interpreted in an absolutely positive way is a running turtle: the race is not in the nature of this animal, this means that the road taken is the right one and we must not waver over, but proceed quickly. Equally positive is a turtle that swims in the open sea: in fact, it symbolizes total confidence in what the future holds.

If in reality you have one as a pet, it is likely that your turtle will often appear in your dreams as your alter ego.

For example, it may be a warning to stop for a moment and make important decisions for our life a little at a time, evaluating all the pros and cons. Without being, therefore, too hasty in the choices.

The turtle, narrow as it is in its carapace, from a psychological point of view makes us think of our condition, a sort of reflection of our personality, especially if we are closed and shy people who are struggling to open up to others.

That of seeing turtles walking in our dreams cannot be called a premonitory dream, but what is certain is that it is a digression that predicts, in some way, the possibility of having great success and wealth in life.

Dream of tortoise in general – A turtle is a reptile that is distributed around the world. Some species live in the water, like the sea turtle, others on land.

Notorious is the snapping turtle, which is said to be particularly biting and an aggressive turtle.

However, experts assert that they use their powerful jaws as weapons only for defense purposes, as do all living things.

The terrapin, which lives in the sea, is famous because of the horn plates on its shell, the tortoiseshell popular for the production of jeweler and art objects, and unfortunately also threatened in its own way.

Just born tortoise – you will have a winning intuition – or more than one – that will allow you to make the most just and ambitious decision of your life. Your existence could definitely turn once and for all.

Tortoise that walk – you are approaching step by step, without haste but progressively, to one of the greatest successes of your life. In this sense you will also enjoy excellent luck and a clear vision of your future.

Tortoise and snakes – you are about to make an important decision for your future, but a loved one or a work colleague, completely unexpectedly, could preach calmly, only to put a spoke in the wheels and prevent you from aspiring to the success you deserve.

With a turtle you combine slowness, but also longevity. Some species reach the age of 150 years. The tank provides good protection against enemies, but makes the animal very immobile. If you turn a turtle on your back, she is completely helpless.

A dream of a turtle has nothing disconcerting unless the reptile attacks. Maybe the dreaming would like to touch her tank or swim with her in the sea. In the dream interpretation, it is an essential difference whether the turtle lives in the water or on land, but also what happens to the dream animal.

The dream symbol “turtle” is in the dream interpretation a symbol for patience and protection. A turtle usually moves quite slowly on land, as if it had all the time in the world. In terms of her life expectancy she has the same, but ultimately also the lifetime of this animal is limited.

In the dream, the turtle is a reminder to take more time for the essentials and to appreciate the moment. With patience and perseverance you can get to your destination without hounding. With a large turtle in the dream, the urgency is greater to take care of oneself; with a small turtle a short break is enough to regain strength.

Depending on the personality of the dreaming, the turtle in the dream can also be an invitation to react a little faster in some situations.

Many turtles in the dream show that not only the dreamer, but also his environment rushes through everyday life. The fact that the environment lives in a similar way as the dreaming itself promotes the bad way of life, as it is perceived as normal. At this point, one should ask oneself in the watch world, whether one should not concentrate better on his own well-being.

Dream of tortoise’s shell – The turtle’s hard shell hides and protects the soft core like armor. In dream interpretation, the dream symbol on the one hand embodies, on the one hand, the vulnerability and sensibility of the dreaming, and on the other, it illustrates its ability to arm it against attacks.

If you see a tortoise in the dream, the dream symbol often has the meaning of earthiness and connects to the childhood of the dreaming. You may be in a situation where you have to represent the values ​​that have marked you outwards. The dream of a sea turtle reflects above all the emotions of the dreaming.

The high life expectancy of the turtle makes it appear in the dream interpretation as a dream symbol for good health. In addition, her vision in the dream promises secret joy and the prospect of an advocate, who may pave the way for the dreaming at work.

Dream of killing tortoise – If you kill the animal in the dream, the protector will turn away from you.

Also finding a dead turtle, injured or sick turtle means a departure of the mentor, albeit by external circumstances.

When a turtle bites, this dream image symbolizes the dreamer’s lack of attention.

Something is changing in the life of the victim, but there is no time to be receptive to it.

Dream of eating tortoise – Positive is the consumption of the reptile in the dream interpretation: One will achieve great success with a great effort.

Dreaming that a turtle is walking towards the sea, the dream symbol indicates that a good friend is in a helpless position and needs the support of the dreaming.

On the psychological level, the turtle is the dream symbol for the insecurity and sensitivity of the dreaming, but also for his seclusion. Those who dream of a turtle may be inclined to retreat into the protective shell in the event of inconvenience.

One should ask oneself, if perhaps even the smallest approach by others is blocked. This could be a serious indication of communication and contact difficulties in dream interpretation.

The dream symbol “turtle” is in the interpretation of dreams on the other hand also a protective animal for particularly sensitive natures.

Perhaps the dreaming often reacts very emotionally and prefers to withdraw at such moments, for fear of being vulnerable.

The dreaming should be aware of the situations in which he feels the need to protect himself, and whether he is currently offended because of something.

At the same time, he must learn to use his hidden strengths.

A turtle emerging from the water signals in the dream interpretation that the dreaming should go out more from itself. If the animal disappears into the water in the dream, the dream symbol indicates that the power to defend itself is just beginning to fade and that it is advisable to retire for a while.

In spiritual terms, the dream symbol “turtle” embodies wisdom and possession of ancient wisdom in dream interpretation. It is closely linked to the act of creation and therefore stands for fertility, health and immortality.

According to the modern interpretation of dreams, the fact of dreaming of a turtle is directly linked to the concept of longevity and good health, since tortoises are animals that can live for many years.

But what a turtle can express is also the possibility of success in life – with people or in a professional environment – thanks to a rational way of proceeding, for successive steps, certainly not rushed.

In general it is a dream with a positive connotation, but it can also imply secondary meanings, which as usual vary according to the context. Not negative meanings by force of circumstances, but still able to make people think.

For people who cannot exactly call themselves reptile lovers, dreams of turtles have a far more profound meaning.

Depending on what dream context the turtle shows up and what she does in the dream, stands or runs, the interpretation can be quite different.

In most cases, dreams about turtles do not focus on their typical trait – slowness – but a feature that is more of a physical nature – the tank.

The turtle shell works in the dream as a metaphorical tank, which you carry just like a turtle with you to foreclose in alleged dangerous situations from the outside world.