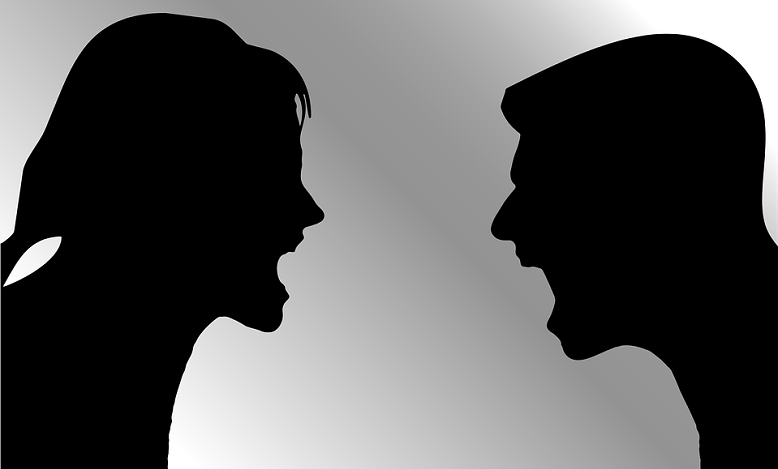 Dreaming of arguing is never pleasant. It often involves a state of agitation that can also cause sudden awakening. It is a dream that in any case creates a certain discomfort and when we wake up we wonder about the meaning it may have had.

The reasons why fights occur in dreams are very often due to jealousy (especially when fighting with a partner) and money (in family disputes); when (often in dreams) people quarrel among friends, it is often because of a man or a woman that both of them like.

Most dreams in which we quarrel with relatives and family happen at home, at the table; instead the quarrels with the boyfriend very often happen on the phone or in the car; as you can see, the dreams of quarrels are quite realistic.

Women, who are very sensitive, often dream of their current partner who quarrels with their ex, because they perceive the “conflicts”, even the unexpressed ones, which can be generated in sentimental relationships, out of jealousy and rivalry, as I said before.

So, if you have been having dreams about arguing, we are going to try to clarify their meanings.

In dreams we find all the classic quarrels that can be expected even in real life, because the relationships and feelings that determine them are basically the same.

Then another classic quarrel of reality that is replicated in dreams is that with the neighbors.

The person with whom you quarrel in your dream can also be someone you perceive as your rival: on a professional level, he can be a colleague; at school level, a school friend.

On the affective level the oneiric quarrel unleashes love (or presumed against the rival): therefore it may very well be that you dream of quarreling with the ex of your current partner (boyfriend, husband / wife, partner), or with a ‘friend’ or ‘friend’ of him / her who makes you become jealous.

Sometimes in certain dreams we quarrel with figures from our past: for example, the former husband / wife or boyfriend / girlfriend; or an old childhood friend; this happens because some situations experienced for the first time (as can be, in fact, a violent quarrel with the loved one) then remain forever in memory inside us, and can recur in our dreams when we are living similar emotional situations.

If in the dream you quarrel with a person with whom in reality you have never had particular problems, it may be that the dream reveals a latent conflict with that person, of which you are not entirely conscious. If you investigate all the details of the dream well, perhaps you could find an indication of what might be the reasons for conflict with this person.

Women, who are very sensitive, often dream of their current partner who quarrels with their ex, because they perceive the “conflicts”, even the unexpressed ones, which can be generated in sentimental relationships, out of jealousy and rivalry, as I said before.

The person with whom you quarrel in your dream could be an authoritarian figure that you perceive as limiting, which you see as an obstacle to your personal fulfillment. This is why we often dream of arguing with our father, mother, brother, husband, boyfriend, boss, owner, etc. The students, for their part, can dream of quarreling with their “leaders”, that is professors and professors.

Dreaming of quarreling with a deceased: it may be due to a bereavement still in progress. Sometimes it happens to dream of arguing with a stranger, a person you don’t know. This is linked to what was said in the previous paragraph; in fact the stranger could also in this case represent a side of your personality with which you are in conflict.

For example, often in dreams we quarrel with an older, or younger person; with a police officer; with the neighbors; with another man or other woman you don’t know. Sometimes, interestingly, we dream of a fight between a dog and a cat.

Also in this case the scene could represent your inner conflict; even if in the dream you do not participate in the dispute, in reality the two litigants represent two sides of your personality, one in conflict with the other.

Try to find a way to reach a compromise between the two struggling instances.

Dreams of quarrels and heated discussions frequently happen to people with a very mild and calm nature, who rarely lose their calm and self-control. For these people it can be difficult to express their frustrations and their needs; they repress their anger, they hold it back, but then it manifests itself in dreams.

It is mainly men who show their aggressive side in their dreams of quarrels: in addition to insulting and shouting, in some cases they come to beat and fight with their “rival” or “enemy”; women scream, cry and sometimes get carried away by their hair. In certain dreams the quarrel can end very badly (we leave ourselves with the boyfriend, we kill the rival), and then we often wake up scared; or, more rarely, peace is made.

The person with whom you argue, however, could also represent a side of your personality with which you are fighting; the scene of the quarrel is therefore a representation of the conflicting state you are experiencing.

Try to rethink the dream objectively, this will help you better understand what is troubling you and how to solve the problem.

Dreaming of arguing with the boy or girl that you like – This is a typical dream of adolescence, dictated by the fear of not enjoying it, of being rejected if I declared to him / her.

Often, for the quiet life, choices are made and the decision is taken to hold back the anger, but to dream of quarreling with relatives and family means that the measure is full and therefore there is the need to face the situations in front.

Arguing with a partner – this dream can reveal dissatisfaction in your personal relationship and also the need to communicate to your loved one that something is wrong and has infuriated the dreamer. A circumstance that you need to externalize.

Arguing with a friend – this dream is symptomatic of the fact that matters have not been ironed out with people we care about a lot, or that we have been hurt by certain attitudes that have affected the sphere of the closest friendships.

Arguing with a dead person – this is symptomatic that there are unresolved issues and that unfortunately they have not been able to resolve them before the death of the person in question. This is a very common dream, which usually disappears over time and with the progress of events.

Arguing with your boss – this dream means that the professional sphere is not serene and that the dreamer disagrees with the top management, or with the daily management of the work. This creates a strong feeling of discomfort in the dreamer.

Arguing with colleagues – this means that you disagree with particular positions that concern your everyday life, dreaming about furious bosses is a matter of principle, as the garment embodies the entire corporate philosophy.

Many people dream of arguing heatedly with a family member, a friend, a colleague or the office manager: it can indicate that you need to talk to this person, to express your frustrations.

It may be that in reality you have subsided the resentment you feel towards that person, and so the conflict is released in the dream.

Maybe you have long outstanding issues with this person, and you haven’t had the chance to externalize your thoughts yet. The solution is to seek dialogue with this person, speak to them clearly and firmly, explaining your reasons.

If you happened to dream of arguing, it means that you are fighting within yourself, to understand whether to take a certain position on a circumstance that concerns you and the people who are particularly close to your heart.

If instead you happen to dream of quarreling with a daughter-in-law, in all likelihood you feel the need to express your problem to close people, inside your family unit, in-laws or friends or however close they may be.