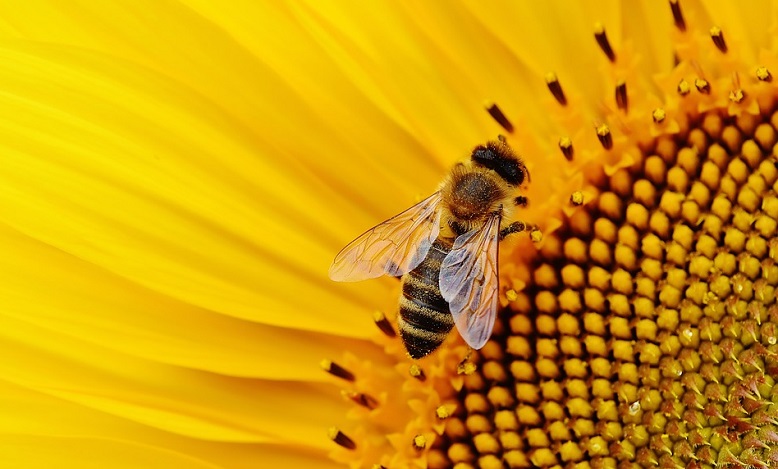 The symbolism of bees in dreams also emerges in the most ancient cultures.

The complexity and organization of their social structure, but above all the ability to transform nectar into honey, a substance that seemed extraordinary and magical, nectar of the Gods, has made them a symbol of royalty and virtue, of wisdom, spirituality, abundance .

Swarm of bees in dreams is a “dream team” that alludes to teamwork, industriousness and organization as ways to follow or to pursue. In our culture, bees in dreams are considered “hard-working”, disciplined and useful, but their symbolic meaning, as with all symbols in dreams, will be affected by what the dreamer feels and feels.

For example, if you fear them because you are allergic to their poison, it is clear that the meaning will be conditioned by fear and will be different from those who consider them harmless or useful.

Consequently, every situation in which bees appear in dreams will be investigated taking into account this and the sensations felt during the dream.

In ancient Egypt the bees were the tears of Ra, at Eleusis or at Ephesus they were a solar symbol of wisdom and order and the priestesses of the initiation rites were called “bees”; Plato saw them as images of the soul of the sage, while for the Christian religion they were the symbol of the Holy Spirit, of the resurrection and of eternal life.

For the ancient interpreters the bees in dreams immersed in nature or flying in the sky, were a symbol of luck and abundance, in other situations, especially when their buzzing was too strong, they referred to annoyances and calumnies; the sting of bees in dreams made people think of jealousies and worries and seeing them come out of the hive bode good news.

It is not certain that everyone will be able to distinguish a bee from a wasp or a hornet; they are very similar in appearance, and it is easy to get confused.

However bees in dreams generally have a more positive meaning, connected to fertility, industriousness, order.

On the other hand, wasps and hornets express more aggression and danger.

Bees have always been a symbol of work and industriousness because all together, working hard, they produce honey, sweet and precious food. For the ancient Egyptians, the bees were born from the tears of Ra, the god of the Sun, and represented the splendor of royalty. In dreams, bees generally have positive meanings, but because, as we know, they can cause very painful bites, they can also be dangerous.

The queen bee is the only fertile bee inside the hive: from it all other bees are born. The worker bees feed the queen with royal jelly: it is this food that allows her to reach fertility. The queen bee is therefore a unique and privileged figure. In dreams it can represent a sexually powerful female figure, which tends to centralize all the attention on itself and to block the way for other women.

A bee that chases you, that attacks you and tries to sting you, can represent a threat, a danger you fear. This dream can occur more easily if you have suffered recent trauma. Many bees chasing you threateningly, killer bees, or poisonous wasps can indicate that you feel haunted by something (troublesome people, thoughts, worries).

They can also be a symbol of anger and aggression that prods you.

This dream comes from the childhood memory of the fear of being stung by bees (especially if you were really stung as a child) and can appear periodically when you are stressed, worried, distressed about something.

The bee sting can also have a meaning connected to love: a bee that flies around you, which confuses you with its buzz, which stings you with its sting can represent falling in love, the feeling of love that it makes its way into you; it could create fear or confusion. Do you know that in the Renaissance paintings Eros, the god of love, is often depicted surrounded by bees that bite him? 😉

It is generally an auspicious dream, because bees in dreams bring wealth, health, prosperity, happiness. But if you feel assaulted, then they represent threats that attack your personal sphere: you probably feel insecure, vulnerable.

Dream of bees flying in and out of the hive – it indicates industriousness, the desire to do and to carry out activities that require all of the dreamer’s energies and must be recovered within himself.

Dreaming of a bee hive – refers to organization, efficiency and good will that produces fruit.

Dream about honey bees – it is one of the most positive images of this repertoire that allows us to predict meditated and directed activities, goals achieved, wealth of thought and intent, solidarity, teamwork.

Dreaming of a destroyed bee hive – on the contrary, it makes one think of broken initiatives, lack of energy and desire to do, to set aside or opposed projects.

Dreaming of aggressive bees – that seem to threaten the dreamer can be connected to aspects of the personality that, disciplined and ordered, have become too rigid and schematic and constitute a threat to the general well-being; the same image can refer to real situations of concern and can become uncontrollable.

Dreaming of a very large bee – and feeling afraid of being stung emphasizes the above meaning, there are strong fears or suspicions that are perhaps kept under control during the day, or, if the bees in dreams are peaceful the meaning of these images can be linked to the need to confront oneself with the symbolic qualities of bees in dreams and therefore with a probable need for organization, structure and order.

Dreaming of being stung by a bee – can be considered a kind of warning, the signal that something can hurt and that the dreamer can be “attacked and damaged”.

The image can link to problems, cunning, treachery of people surrounding the dreamer. If during the dream the burning and painful sensation of the bee sting is also felt, this image may refer to a rash that is occurring. If the sting of bees in dreams is directed to a specific area of ​​the body the symbol will be linked to the symbolic meanings of that part of the body.

Dreaming of killing threatening bees – indicates the ability to cope with the obstacles and threats of others. it foreshadows in the dreamer ability to renew himself by integrating aspects of himself that are less rigid and controlling, the need to accept the chaos and disorder of some situations, the ability to defend oneself.

Dreaming of the queen bee – can refer to a real person who embodies qualities of command, authority, positive influence, leadership. Or bring attention to a disowned self, a part of the personality that is not recognized and whose integration has become necessary for the journey of the dreamer.

A queen bee in dreams can connect positively to a generous and authoritative female figure, and in a negative sense to a centralized, interested and despotic female figure.

Dreaming of bees at home – in light of what has been exposed so far, is to be connected to an auspicious signal.

However, if the dreamer feels assaulted by the presence of these insects, the dream must be interpreted as a threat to his personal sphere. A contextualization is therefore necessary, which must take into account what happens in the dream and the feelings that accompanied the dreamer before he fell asleep and began to dream.

Dreaming of chasing bees – bees which sting denotes danger and threat, but also anger and aggression. The sting of a bee can also be linked to love: the insect fly, its buzz and its sting refer in fact to the feeling of love that is born in the dreamer, for which he feels confusion and confusion.

Dreaming of having bees on you – is an image whose interpretation is linked to the part of the body on which these insects rest.

Dreaming of bees who make honey – is absolutely the most positive dream vision, because it is a symptom of well-channeled energies, of thoughtful activities and goals achieved.

Dreaming of killing bees – denotes the dreamer’s ability to face obstacles and threats, to know how to defend himself, and to renew himself, leaving aside the most rigid aspects of his personality.

Dreaming of dead bees – indicates lack of ideas and desire to do, and projects that have not been followed: it is therefore a dream of bad luck.

Thus bees in dreams can connect themselves with aspects of the dreamer’s personality that tend to balance and aggregate under the guidance of a conscious Self, a central element that, like the queen bee for the hive, is able to withstand everything the psychic system.

Bees in dreams represent a nature aimed at ordering and accepting oneself and one’s role, but also express intensity, depth and self-defense.