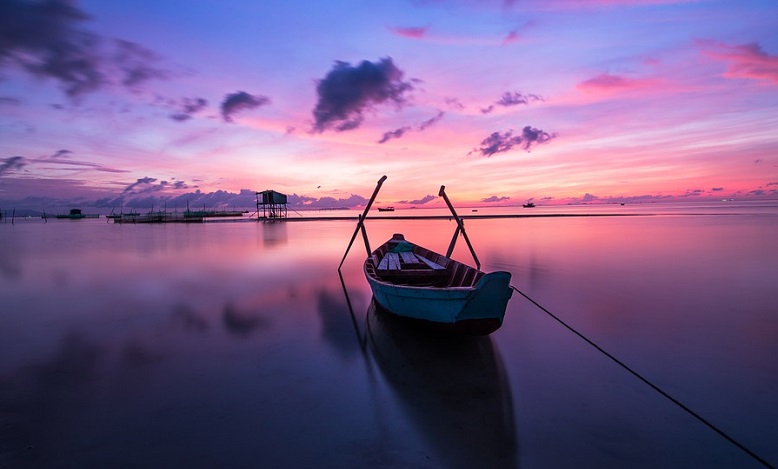 Dreaming of a ship and dreaming of a boat have the same dreamlike context, but the meanings often tend to diverge, because the two symbols, though similar, cause different emotions and can connect to different aspects of reality.

Dreaming of sailing with a ship or boat or other boat alludes to the journey of life, to the long or short term goals, to moving along a known or unknown route and to all the pleasant or dramatic unknowns that the route reserves.

The ship in dreams expresses the driving dynamism of existence, the archetype of an unstoppable becoming that traces the innumerable traces of days, events, adversities, feelings.

It is something that cannot be stopped by an internal movement, an archaic drive that leads to advance even without reflection.

While the boat in dreams has a more intimate and introspective action, it reflects the limits of the contingent and the ability to stay afloat compared to something that is being faced.

Dreaming of the boat is a metaphor for navigating towards a precise goal, protecting oneself from adversity and seeking a balance between certainties and insecurities, between the shelter offered by the boat, the instability and the dangers around.

The open and concave, welcoming and deep shape of ships and boats in dreams alludes to the feminine of the mother’s womb, to the safety and protection of the cradle.

The feminine energy of these symbols is the one that senses and orients, which gives a direction that conforms to one’s dreams and desires that “imagines” and sees beyond the immediate difficulties, obstacles and dangers.

It is the one that filters the outside and guarantees protection, comfort, care, but also acceptance of what happens.

Boat and ship in dreams refer to the shelter of the cradle, of the house, of the mother, but they also allude to the last asylum of the coffin and the tomb and to the goal of the journey into death.

While the masculine energy both in the boat and in the ships in the dreams is the force that gives the movement and that keeps the course, the bow that advances and strongly cleaves the air, the water, the wind, the oars that penetrate into the water, the tree that stands out, the will to reach the goal.

The symbolism of the boat in dreams is ancient and rooted. The journey of life that leads to death is the dominant theme and, from the past returns in the sagas, myths, rituals (think of Charon’s boat that ferries the souls of the dead).

The funeral boats welcome and accompany the deceased: boats of spirits and solar boats advance into a chthonic and underground world, where the boat becomes a coffin and where the eternal cycle of death-rebirth begins again.

Even in the dreams of modern man the boat tends to present itself in dreams of mourning or conditioned by the thought of death, in dreams of transition, linked to death-rebirth. While in the symbolism of the ship more masculine and determined aspects emerge: distance to be traveled, objectives to be reached, adventures to face, obstacles to overcome.

Answering these questions will help the dreamer to create a grid within which to move more easily to analyze the dream and intuit its connections with reality.

For example: calm or agitated waters in which the boat moves will be a reflection of what is being experienced, of the possible problems and obstacles with which it must confront. The emotions you feel will reflect real security or discomfort.

The shape of the boat or the ship will be another evaluation tool: large and spacious will allude to moving effortlessly in one’s daily life, tight and damaged will reflect insecurity, feeling without means, low self-esteem, a contingent and apparently insuperable problem. And so on.

The more the analysis becomes capillary and collects data, the more the dreamer will discover connections with his life.

Dreaming of a ship in the sea – it is the symbol of the journey in life, of the great energies that are stirring in the human being and which tend towards the future. It alludes to the passage of time and to a goal to be achieved. It can represent the safety and support of a neighbor.

Dreaming of being on a stormy ship – the meaning is related to problems that are destabilizing the dreamer. Giant waves, rain and storms that hit the ship in dreams reflect the obstacles and the “emotional storms” (conflicts, sorrows, pain, and depression) with which one is confronted.

Dreaming of being in a boat in the river – it is the most explicit symbol of the path of life, of the unstoppable flow of events, of the outdated phases, a symbol of all that passes and of one’s confidence and ability to let go of this movement and follow one’s own destiny or, on the contrary, of one’s insecurity and fear of the future (and of death).

Dreaming of being on a cruise ship – is equivalent to feeling confident about what you are doing, the direction you are taking and your path, feeling yourself in a “barrel of iron” surrounded by consent, eager to relate to others, protected by circumstances.

Dreaming of boating in the lake – connects to the need for reflection and perhaps solitude, the need to review aspects of one’s past, to investigate one’s emotions.

Dreaming of a boat in the harbor – it is a symbol of the frustrated desire to travel (real and metaphorical), of an objective left in an embryonic state, but it can also represent feeling safe, knowing that you have a place to return to, a home, a shelter, of affections. The port in dreams where one’s boat is moored can also indicate the values ​​that guide the dreamer and keep him in his convictions.

Dreaming of sailing in an underground conduit – all the narrow and dark underground channels allude to the cervical canal and at the time of birth.

This image can also be true connections with the beginning of physical life and with the instinctive energy that pushes the infant to go to the exit. From this point of view it is a symbol of strength and hope even in “dark” moments and of the need to rely on nature and life.

In other dreams it may indicate the need to analyze profound and unknown aspects of oneself. Equivalent to a journey into the shadows.

Each boat dreamed has different forms and functions and causes equally different sensations linked to the dreamer’s experiences, to read stories, to films seen, to his fantasies, memories, dreams.

Dreaming of cruise ship – alludes to a project initiated, an action undertaken with determination and self-confidence, to the desire to reach a clear goal.

It can also indicate the need to leave behind what has been achieved up to that point to go towards new challenges. It may be the dream of a young man who leaves his family projected into adulthood.

Dreaming of an ocean liner – as mentioned above, but with meanings related to the grandeur of one’s desires and the strength that is felt within to achieve them.

It can represent the need to escape from reality, put distance between oneself and one’s problems, or the desire to start again, to give oneself a new opportunity.

Believing in the opportunities of life. Sense of adventure. Big ships in dreams can also bring attention to interpersonal relationships and the way they are managed.

Dreaming of a rowboat – it alludes to the need to cross (metaphorically) and face a particular moment in one’s life.

The oars in dreams are the symbol of the tools that the dreamer has available to advance and overcome a situation of stalemate, of difficulty, of depression. It is a positive symbol that invites us to move forward.

Dreaming of a motor boat – it can indicate the opportunities and benefits that the dreamer has to do something, to face a situation or to reach a goal.

It can be the symbol of a phase of elaboration of a problem, of strength and enthusiasm that allows to advance quickly.

To understand the meaning of the boat and the ship in dreams it will be necessary to carry out an analysis of the context in which it appears: the state of the symbolic contour elements (water, sea, sky, wind, etc.), of the characters (the dreamer is alone or are there other people with him?) of the sensations felt during the dream (tranquility, happiness, fear anxiety).