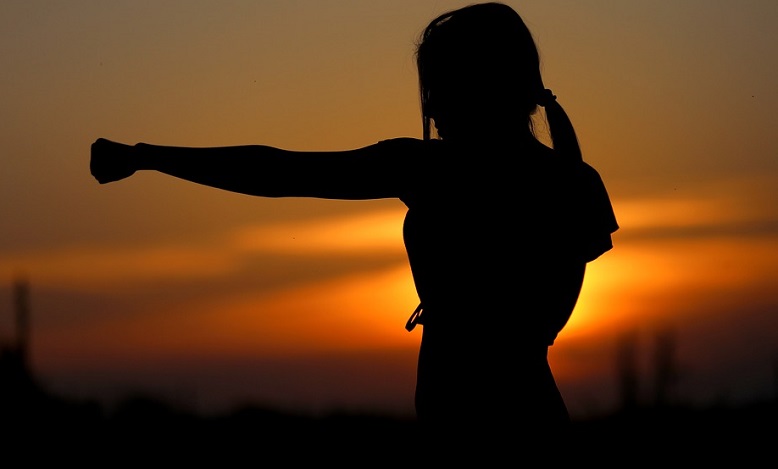 The struggle has been shaping the coexistence of humans and animals since time immemorial. In our society you fight at the workplace or in the public space. The verbal attack, big and small intrigues and meanness are the weapons of modern civilization.

Sporting competition, such as in a handball game, is a socially acceptable way to live out aggression and assert one’s own position of power. In wars, in battle, there are firefights and attacks that claim many lives.

The fascination exerted by boxing or wrestling on a broad audience, for example, shows how archaic people still are at the core of their being. A ninja or a samurai from ancient Japan mastered the Asian martial arts to perfection and was a dangerous opponent – even today, myths about the mysterious, hooded fighters, who were able to move lightning fast.

A dream of a fight is always accompanied by a great inner tension, regardless of whether one seems to be the victor or the vanquished. It mobilizes all forces, the adrenalin level rises. The fear of succumbing is great.

To find out the meaning of the dream with the help of dream interpretation, the details and the real life situation should be considered.

The fighting stands as a dream symbol for mental conflicts of the dreaming. He may be burdened with differences or disputes with people from his immediate living environment.

In dream interpretation, however, the dream is not understood as an invitation to seek confrontation with others. Rather, the dreaming should become aware of what exactly is on his mind.

A fight can also symbolize an internal conflict when two opposing characteristics of the dreaming bring it out of balance.

The dream symbol “fight” stands for a conflict that is solved in a violent way. The dreaming may have to deal in real life in a certain situation and has the feeling that he does not defend himself sufficiently.

Dreaming of a collision with his partner does not automatically mean in the dream interpretation that love is at an end. Maybe there are just unspoken disagreements or the dreaming feels set back by a third person.

The dream symbol “fight” may also express an anger repressed in real life. Unconscious aggression can refer to other people, but also to inadequacies of one’s own personality.

For the dream interpretation, the details of the dream are crucial. If the dreaming actively participates in the combat, his subconscious mind signals to him that in real life he is quite able to defend himself against a certain situation.

If the role of the dreaming is rather passive and he only watches the fight, the dream should call him to more activity in order to assert his interests.

In dream interpretation, the dream symbol “fight” indicates a spiritual conflict. Instead of trying to prevail by any means, the dreaming should find out the causes of the confrontation and seek solutions.

Struggle can stand for strife in one’s own personality, which is divided by opposing qualities and needs, – one must then try to balance these opposites.

Repulsing is a natural defense mechanism, – if the dreamer feels threatened in his everyday life, it can be easy for him to act out his feelings on the level of the dream.

Anyone who engages in a dream in a dream, probably wants to solve a momentary conflict, but had not the right courage. Being involved in a fight usually indicates that you are confronted with your need for independence.

You may also have to express your anger, frustration and the unconscious desire to hurt a part of yourself. The suppressed anger can also be expressed by what one feels towards another person. If one engages particularly active in a fighting turmoil, one can stand up in the awake life against a seemingly hopeless situation and master them.

If you just watch the fight, you want to get out of trouble with the help of others, or the dream calls for you to defend yourself against hostile people or adverse circumstances in life simply more. Watching a battle on the battlefield (in the arena) indicates one’s own glee and malice.

The dream symbol fight is the indication of a spiritual conflict. The dreaming should try to work out, where and why there is a conflict, and handle it more sensitively, instead of ‘fire from all tubes’. The law of the sinful world is the law of struggle.

Dream of fighting – Among the most common nightmares include those in which the dreaming attacker fends off or defends himself physically against attackers. The dreaming finds himself in a dangerous situation again. By nature, defense dreams are very similar to the dreams of persecution.

The big difference is that the dreaming flees in pursuit dreams from its attacker and shuns the confrontation with this one. If the dreamer defends himself, the attacker is already within reach. A fight takes place, the conflict is carried out.

In both dream types the fear is in the foreground. The dreaming is afraid of the attacker and defends himself. That in turn is a sign of protection or need for protection. In addition to fear, aggression and energy are particularly evident. The attacker shows a very aggressive behavior and the defense of the attacker requires a lot of power and energy.

First, the dreamer should find out who the attacker is and why he attacks at all. The first thought should be devoted to the dream context. If the dreaming in the last days before the dream itself was in a conflict situation, this is probably just processed in the dream. Such a conflict situation can be an aggressively conducted quarrel, a fight actually experienced or a situation in which a violent conflict could have come about.

If this is not the case, the nightmares are based on an internal conflict. Something is out of emotional balance. These can be, for example, suppressed feelings that want to be lived out. The famous interpreter and psychologist Carl Gustav Jung spoke of being a collective subconscious. He also assumed that each person carries a variety of traits and characteristics in itself.

A person can only become happy if all personality traits are accepted and lived out. If certain properties are suppressed, an imbalance arises. The suppressed traits eventually cease and, as it were, launch an attack on the oppressors in order to restore their emotional balance.

Dream of defending yourself in a fight – In many cases, nightmares in which the dreamer defends himself against an attacker are triggered by external events. Nightmares of such origin are harmless and perfectly normal if they occur sporadically and not regularly.

Those who are being attacked by an aggressive dog in the afternoon on the street often have dreams of an attacking dog during the night. As noted, there are numerous conflict situations that can be handled in the form of nightmares. But conflict situations do not always have to be characterized by aggression.

Something else may have happened, which scares the dreaming.

Dream of fighting in an office – The dreaming may notice changes in the office, which he regards as negative. Perhaps he learns that the colleague, who speaks badly about the back of the dreaming about him, suddenly comes into question for the promotion, which the dreaming actually already had. Or the boss has hired someone, who reduces the dreaming more and more tasks, so that he fears, despite all merits, not to be used and rationalized.

Although this fear does not come from an acute threat situation, it is caused by external events. Such triggers are often not immediately recognizable, because this is not a concrete event, but rather a juxtaposition of smaller events or an event process. These nightmares can be processing dreams.

But it can also be warning rooms, which indicate to the dreaming that danger could threaten him. That can be rated positively. The dreaming becomes aware of the impending danger. No open conflict has yet arisen.

Instead, he has time to deal with the perceived threat situation and seek a solution. The impending conflict can probably still be warded off.

Dream of fighting in a battle – Often the battle in the dream is actually about professional competition. The dream symbol can be an indication of one’s own combative nature: one is able to assert oneself. In the family area a fight in the interpretation of dreams is often an indication of a personal injury.

Eventually, the dreamer fears that he will not be respected.

Dreaming of a fight in a book or movie, such as in the Harry Potter novels, one will probably be able to master the difficulties that arise through his bravery.

Dream of fighting in a battlefield – However, dreaming of standing on a battlefield, perhaps as part of a regiment or with a protective mask, means you will know how to help yourself out of great difficulty.

Even the fight in a trench in the dream can be interpreted in this way. If you see a battleground in the dream, you prepare yourself internally for a tedious job.

The dream symbol “fight” stands for a conflict that is solved in a violent way. The dreaming may have to deal in real life in a certain situation and has the feeling that he does not defend himself sufficiently.

Dreaming of a collision with his partner does not automatically mean in the dream interpretation that love is at an end. Maybe there are just unspoken disagreements or the dreaming feels set back by a third person.

All of these interpretations should be enough for you to find the answer you were searching for, so hopefully this text was helpful.