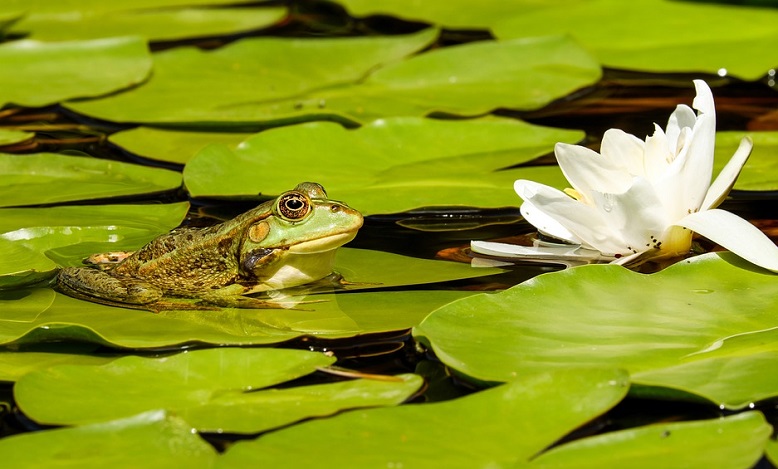 The frog is considered by many to be a somewhat slimy and ungainly animal, but very few are aware of its lucky power both in reality and in dreams.

Its existence alternates both in water and on earth and therefore it’s being elusive and manifesting itself at night makes it an image associated with the concept of primitive sexual energy.

In addition, its transformation from a tadpole to a frog has similarities with childbirth: the tadpole resembles the fetus, first living in water and then starting its life on earth.

From a European point of view, the meaning given to this animal is linked to its development phases, i.e. the path that turns it from an egg into a tadpole and finally into a frog.

For this reason, as a symbol of resurrection and spiritual evolution, for Christians the frog is considered a symbol of the Holy Trinity and Resurrection: this connection is also visible in many works of art.

In China the frog is considered as an emblem of the Yin energy (in relation to the Ying and Yang) and seen as a symbol of luck. In fact, Feng shui (relaxation practice) recommends placing the image of a frog in a window in order to promote fertility and a happy family life.

As with many other animals linked to a symbol of duality, the energy of the frog is also considered as a relationship between life and death.

In Japan the frog is seen as a symbol of luck, especially for travelers: for them the images or amulets that represent this animal are considered elements of good fortune, especially if the trip involves crossing a river or a sea.

It is also said that in the Japanese language the word used to say “frog” is the same one used to say “return” or “to return” and this is why travelers can take with them the image of this animal as amulet to return safely from the trip. This amulet is usually also carried inside portfolios so as not to lose the money contained therein.

The Hindus see the frog even more profoundly: they believed that the frogs were in charge of protecting the world within the space and that, in particular, they represented darkness.

Some of the moments of our life in which frogs, seen as amulets, could help us are: when we find ourselves crossing different transitions relating to the phases of life; when we need an element that favors safety when we travel; when we want to improve our intuition, strength and connection with the spiritual world.

The frog in dreams represents the adaptation to different and contrasting situations, knowing how to handle unusual situations, moving at ease in very different environments and circumstances, the dreamer’s abilities that maybe are not evaluated or exploited enough, but that can be resources precious.

Dreaming of a frog must therefore make us reflect on the alternation of situations to live, on the ability to immerse ourselves in what we are living without being completely absorbed by evaluating other possibilities and prospects (jumping), calling attention to ourselves, to our own needs, on their own needs (the croaking), on the different possibilities, opportunities, relationships that derive from it, on the ability to manage them.

The frog is an amphibious animal whose existence alternates on land and in water, and here is explained the contrast of situations, the duplicity of behavior (moving, jumping, swimming) and the ability to adapt to which the symbol alludes to which is equivalent to know how to move and juggle both in the physical and emotional world.

Dream about a big frog – amplifies all the general meanings of the frog, perhaps the dreamer must notice some qualities that belong to him, maybe he needs to use them, maybe he is forced to adapt to a difficult and contradictory situation, perhaps he wants more attention.

A big frog in dreams can allude to the emergence of a sexual impulse. The situations are multiple and completely different and the context of the dream will guide the meaning

Dream of a small frog – it is a new content of the unconscious that is being shown to the dreamer and can represent something that can grow, a possibility, a quality.

If the sensations in the dream are to please the little frog in dreams can connect to joy and also new developments in love or feelings.

Dreaming of a jumping frog – indicates the need or presence of mental agility, physical energy, the ability to see things from different perspectives.

Perhaps the dreamer must get out of his certainties and habits, from the usual context, perhaps he must express himself differently than usual.

But the frog that jumps into dreams is also the symbol of a new phase of the dreamer’s maturity that allows us to “move forward” in life more easily.

Dreaming of frog in house- shows the need to integrate the qualities belonging to the symbol of the frog: greater elasticity, a wider vision of things, adaptability, and ability to capture the best from every situation.

But the same image can reflect the instinct not mediated by consciousness, uncontrolled impulses of desire that invade the dreamer.

Dream of a frog that chases you – the dreamer may have to deal with aspects of his reality (represented by the frog) that he is rejecting and escaping.

They can be internal resources that they don’t want or can’t see (ability to manage opposite situations, aspects of themselves that are being transformed) or situations that they suffer and that require the ability to adapt, strength and mental flexibility.

Dreaming of many dead frogs – it can indicate the weakening of instinctive and vital impulses, but also of curiosity, enthusiasm, energy. It is an image linked to moments of difficulty, depression and lack of strength, vitality and will.

Dreaming of crushing a frog – it means rejecting what emerges from the depths of oneself, not feeling at ease with instinctive impulses and sexuality or confronting the annoyance of the intrusiveness or vitality of others.

Dreaming of croaking frogs – it can indicate chatter, gossip, persistent and annoying thoughts or call attention to instinctive aspects that are not honored and that are not satisfied.

If the sensations perceived in the dream are a nuisance, the frogs croaking in dreams are connected to unwelcome presences and advice, to feel disturbed or crushed by the intrusiveness of others and to one’s mental chaos.

Dreaming of a rain of frogs – frogs have always been associated with rain and humidity and after a rain it is easier to feel them active and hear them croak, but seeing them fall from the sky as if they were raindrops, can allude to unconscious contents that are violently breaking down and sudden on the dreamer.

It represents an invasion of needs hitherto controlled by conscience (and perhaps also by spiritual needs and rules) that suddenly can no longer be contained.

It is a symbol of destabilization imbalance, but it is also the message of needs linked to instinct and evolution (change, transformation, transition phase) that must be taken into consideration.

Dreaming of eating frog meat – it represents the “need” to integrate qualities belonging to the symbol of the frog, perhaps the ability to adapt or to grow, mature, transform, perhaps vitality and physical and mental energy.

However, eating a raw frog in dreams brings out more instinctive and vital aspects, while dreaming of eating a cooked or cooked frog (such as frog legs) shows unconscious contents that have already been processed and adapted to the dreamer’s conscience, who have suffered a work of mediation and therefore of the original symbol preserve above all the transformative element that can allude to a similar transformation that must occur in the reality of the dreamer.

Dream colorful frogs – it is quite common to see colored frogs in dreams. Each color gives the original symbol another quality that contributes to the overall meaning of the dream. For example:

Dream of a white frog – accentuates aspects related to instinct and sexuality, concentrating instead those related to growth and evolution or perhaps to an excessive impulsiveness.

Dreaming of a frog is a very powerful symbolic image that refers to the infinite riches hidden in the unconscious, to new and full possibilities of implementation and evolution of the renegade aspects of the psyche.

Dreaming of a frog can indicate the moment when consciousness breaks in and confronts the emergence of unconscious contents to be processed and integrated.