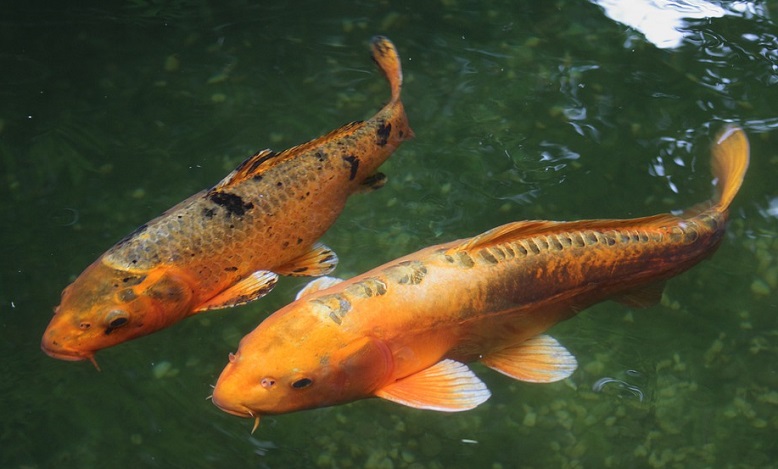 The fishes in dreams are linked to the symbolism of water and to the unconscious depths: solitary or in groups, colored, alive or gasping, cooked or raw, their silent presence opens a direct channel with the dreamer’s unconscious and with his underwater world , occult, far from reason.

The fishes in dreams are removed contents that are going back to the light of consciousness and with which the individual must measure himself.

Dreams about Koi fish are especially interesting, so we are going to talk about them as well.

Small or large, they move in an environment that fascinates man, but that is foreign to him and that contains mysterious, obscure, unknown aspects whose strength and depth is emphasized by this movement.

The phallic form of fish and the consequent appeal to instinct and emotional are one of the most obvious meanings that emerge in the symbolism of fish in dreams.

In ancient times the phallus was often represented in the form of fish with meanings related to manly strength, fertility, abundance (the multitude of eggs laid by the fish was associated with the sperm-generating power); even today, in the popular culture it is used to call the male sexual organ “fish”.

Even Christian iconography used the image of fish to represent the Christ, the church, the revelation of faith, the saving power of baptism that takes place through water and physical and spiritual nourishment (in the Gospels, breads and fish are the meal that Jesus offers to his faithful).

In the symbol of fish in dreams the connection between two levels and two worlds (air and water, consciousness and unconscious, thought and emotion) is decisive, and also in the Old Testament the whale of Jonah that swallows him and holds him in his belly for then spit it out, it is the symbol of a phase of transition and of elaboration, suffering, difficulty, solitude, interiority that characterizes it.

In the meaning of fish in dreams, both the symbolism of antiquity and the sexual aspects of abundance, regeneration, fertility that materially and intellectually express themselves must be considered, as well as spiritual influences, the need and the search for guidance in this area.

Dreams about Koi fish – In principle, Koi fish dreams should represent perseverance in adversity, strength, determination and the will to achieve goals.

These designs are often dreamed by those who have passed or are currently trying to overcome the difficulties in their lives.

However, this piece of art is also often used for purely aesthetic reasons, because they are beautiful fish that fit perfectly in almost any design.

While there is some debate about this fact, many believe that the number of fish, the direction in which they swim and the colors used can change the meaning of a Koi fish dreams.

For example, seven gold colored Koi fish are thought to lead to a sudden fortune, while seven red fish and one black represent a longer precedent that is protected from any malice.

Dream of huge fish – indicates what must manifest itself in the physical and psychic reality of the dreamer: perhaps there is something urgent, something “enormous”, something big “(a change, a transformation, a danger) with which we must confront ourselves.

Dreaming of being bitten by fish – it can reflect unconscious and destructive forces that the dreamer is not able to cope with, or emotions considered unseemly that he struggles to control in the diurnal world. Are dreams related to aggression?

Dreaming of dead fish – or seeing them gasping on the seashore or on the surface of the water, must make the dreamer reflect on the aspects of his reality in which he finds himself “like a fish out of water” or where he does not feel at ease, in which he feels the impossible to express completely, in which it lacks energy.

Dreaming of being eaten by a large fish – (like Jonah with the whale) is a very powerful image that can reflect a passing phase of life: people die from habits and consolidated relationships to be reborn to the new.

The dream takes the form of an initiatory rite that concentrates the energy and strength of the dreamer in propitious and inevitable isolation (the belly of the fish), to then project it outside, into activities and works, into relationships, into a new image of Se ‘.

Dream of catching fish – it can represent a situation of stagnation and waiting linked to what one is experiencing, or a more active inner search: the dreamer is confronted in a serene way with his being and is interested in exploring what takes place at a deep level within himself.

Dreaming of fish on the plate – they are images that will be analyzed taking into account real sensations of attraction or repulsion for the fish as food. The symbols related to eating and swallowing relate to pleasure or its renunciation (repression, sublimation), to real and metaphorical nourishment or lack of it.

This translates into attitudes of openness or repulsion towards a situation that is being experienced, towards a relationship, or towards oneself, towards the inner qualities that must be recognized, finding space and nourishing the dreamer.

Dream of eating raw fish and feeling disgust – Like above. It will be important for the dreamer to rethink the situation in which he had to “swallow”, in which he had to subject himself to incomprehensible, obscure, disturbing, “raw” things, or rethinking what he feels towards aspects of himself considered unpleasant or “indigestible” that perhaps they manifested themselves (renegade aspects).

Dreaming of eating an appetizing fish – feeling the taste it can allude to the need to recover one’s centering, to enjoy one’s solitude, or the pleasure derived from a two-way relationship, in search of spirituality.

As with other symbols related to the animal and plant world, the meaning of some species of fish in dreams is linked to the characteristics that distinguish them. For example:

Dream of goldfish in the glass bowl – it can allude to more reassuring and common aspects of oneself, to a certain naivety, to the world of childhood.

Dreaming of fish in the aquarium – brings attention to one’s “ideal self”, to the image one loves to give of oneself, but also to the fantasy and to feel different (and separate) from others.

Both the goldfish and the fish in dreams in the aquarium, can indicate a greater need to express themselves and to expand, the need to be no longer “content”, domesticated or limited.

Dream about tropical fish – colorful fish and fanciful shapes allude to creative and original aspects of oneself and to the need to give oneself more freedom.

They can emerge as compensation dreams when the dreamer has a monotonous and gray life to stimulate him to greater vivacity or to a more positive vision (in color) of reality.

Dreaming of a shark – or dream of another fish that has an aggressive and ferocious appearance (piranha, orca, sea monsters), can bring attention to its aggressiveness and to the way it is expressed, but also to the threats that loom over it, to the fear of not knowing how to defend itself in the world and among others.

Carp in dreams – it is a positive symbol of far-sightedness, longevity, resistance, especially in the East where the koi carp is a protector, admired, honored and bringer of luck; in the West, as a common fish, it can be linked to nourishment, health and physical strength.

The piranha in dreams – it is linked to aggressive and predatory instincts and to phagocytizing and destructive aspects (internal and external to the dreamer).

The salmon in dreams – it is a symbol of strength and determination, of the energy needed to overcome obstacles and to face life (salmon fish that streams of water upstream to go and lay their eggs, traveling thousands of kilometers), but can also be linked to the pursuit of a long-term goal and the strength of a feeling that helps overcome every difficulty.

Fishes in dreams are connected to very vital aspects linked to instinct and the ability to swim, that is to say, to advance in life, and when they appear in silver groups, or when they are seen waving just below the water level, they refer to quality of the dreamer, to unconscious characteristics that are emerging, to inner forces that must be recognized.