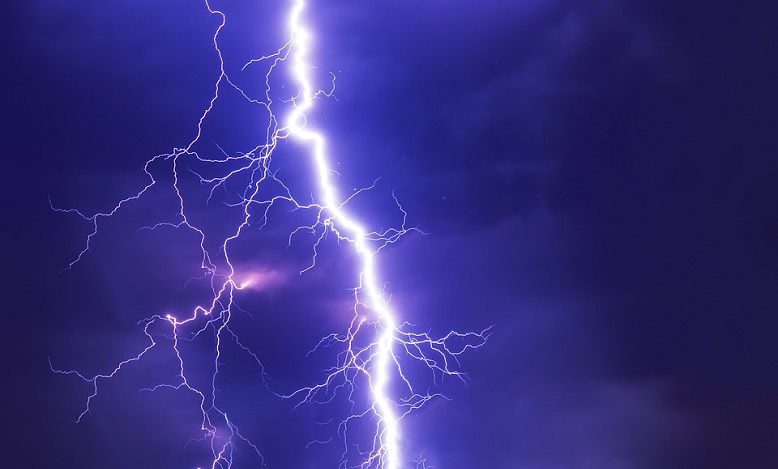 How to interpret dreams about lightning and thunder and dream of thunder and lightning when they do not appear together with thunderstorms? In this article different symbolic elements linked to the bad weather are analyzed, we distinguish between them and decontextualize the possible meanings.

Dreaming of thunder and lightning in the sky is linked to the symbolism of the storm and the turmoil in the dreamer’s mind.

Sudden and violent disturbances, repressed and disowned emotions that manifest themselves in explosive form, real obstacles and problems that are distressing the dreamer or that the dreamer does not consider with sufficient prudence.

Even the thunder was linked to the divine power, it was the voice of God and the announcement of his anger or his sorrow, the threat of an incoming punishment.

The echo of thunder in dreams was an omen of what was going to happen to the dreamer: positive news or misfortune, changes to face or revelation.

The meaning of dreaming lightning, thunder is linked to the compressed and concentrated energy of these natural elements, to the power that characterizes them and which affects reality, the psyche and the collective unconscious.

Think of the commonly used expressions “A flash of genius, Fast as lightning, A bolt from the blue, A lightning bolt” “Lightning and lightning bolts” which are associated with speed of thought and intuition, speed tout court, immediacy, violence and fullness of the event, sudden change, sudden love and passion, amazement.

While the expressions: “It has the power of thunder, Rumble of thunder, Thundering voice” highlight the power and persistence of a sound or a voice.

Although the meaning is often connected and intertwined with that of the temporal, dreaming of lightning and thunder is an omen of something that must be revealed, that is manifesting and of which it is important to consider the connections both with the objective and subjective level of the reality of the dreamer.

Thunderstorm, lightning and lightning in dreams are an explosive energy to be assimilated to the destruction and chaos that precede any new beginning and which, by releasing emotional tension, allows the resumption of relationships on different bases.

In the following list of dream images, lightning, thunder, and thunderbolts are first treated in thunderstorm and storm related dreams, later coming to the decontextualized symbol that was created to end with lightning and thunder in dreams matched with other aspects of the dreamer’s reality.

In this article we will consider the symbol of lightning, lightning bolts and thunder in dreams as dreamlike elements decontextualized from the temporal, so as to deepen their symbolism and meanings and offer further possibilities for reflection to the dreamer.

In ancient cultures the symbolism of lightning flashes and lightning was linked to the Iranian divinities and the strength given off by lightning alluded to a superior power that could not be missed.

Lightning and thunder were the weapons with which God struck and punished. 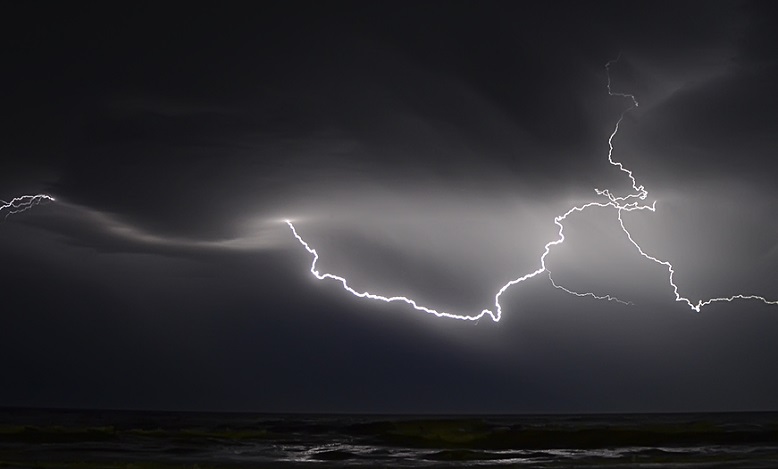 The image of Zeus that from the top of the Olympus expresses his anger by throwing the arrows forged by Volcano is imprinted in the minds of all. But lightning and thunder falling from above were considered a sign that indicated, warned, gave importance and sacredness to a place or a person.

The man struck by lightning was a chosen one, he was enlightened by divinity, an untouchable relieved by human miseries and connected to the “high” realms of air and sky, to which divinatory abilities, sudden revelations, the reality glimpsed “in a flash “.

Dream lightning and thunder – it can indicate the need to clarify and precisely define one’s way of seeing. It can highlight an internal tension and a nervousness that perhaps is being discharged on the people around (or that someone dumps on the dreamer).

For some scholars it may have spiritual significance, indicating a form of “enlightenment”, a sort of “call” to the divine. For others it is connected to unexpected and unpleasant events. The sensations felt in the dream will be essential to direct the analysis.

Dreaming of lightning falling into the sea – the dreamer must take note of the unfathomability of the unconscious and the deep energies that inhabit it, he must also know and accept his own emotional world and his power.

Dreaming of lightning that illuminates the sea – this is a sign of awareness, lighting and clarity with respect to some emotion that is being experienced. It can also highlight a sudden change in one’s feelings towards someone.

Dreaming of lightning at home – it can have two aspects: one linked to what is happening inside oneself: stress, nervousness and tendency to verbal aggression, the other linked to real conflict situations perhaps in the family.

Dream lightning that hits the house – it is linked to a sudden external event of which the scope is feared and which can have an influence on one’s well-being, on one’s habits and also on financial security.

Dream of red lightning – they can associate themselves with anger, with words “of fire”, with burning and intense feelings such as love and sexual passion.

Dreaming of lightning from a clear sky – they are linked to a shocking and sudden event. Think of the expression “Like a bolt from the blue” that clarifies its meaning. Meaning that can also be positive and refer to unexpected and pleasant things and to new things coming.

Dreaming of lightning at night – it can indicate the need for clarity and order, the need to use rationality to illuminate a “dark” (complicated, ambiguous) situation, to face a difficult and dark time. It can also connect with spiritual enlightenment.

Dream of lightning falling nearby – it can be considered a kind of warning, the signal of a close threat with which one has faced or is afraid to face. It can indicate the need to become aware of something and to clarify what is happening.

Dreaming of lightning that hits a person – when the dreamer is struck by the lightning, the dream can be connected to feeling targeted, feeling conditioned by the emotions and wrath of others. More easily it refers to the classic love at first sight, to the prey of a sudden love and violent passion. While the meaning of lightning striking a person seen only in dreams brings attention to what is happening around the dreamer and to possible feelings that he does not yet recognize in himself.

Dreaming of being chased by lightning – is equivalent to feeling threatened and chased by the troubles and bad moods of others, or feeling prey to remorse, not wanting to accept an uncomfortable truth.

Dreaming of lightning and earthquake – a truth that is destabilizing, sudden and violent events that break down on the dreamer’s safety and habits.

Dreaming of lightning striking a tree – is equivalent to being affected in one’s own security and affections. It can reflect, for example, one’s fears for the health of a nearby person one has always been counted on, or be the symbol of a malaise that “crushes” health and strength.

Dreaming of seeing lightning – compared to lightning, lightning amplifies the symbolic qualities of light so that meaning can be connected both to the power of rationality and to that of spirit. These images refer to the need to see more clearly, to be dazzled (i.e. not to see, to see confusedly, to perceive), to be enlightened (to discover something, to know something new about someone), learning unexpected and perhaps shocking things.

Dreaming of a unique flash emphasizes even more the meaning linked to lighting, to the need to see and understand what maybe you don’t want to see.

Dreaming of lightning in the sky – you are close to anger and need to the discharge of tension, discontent, nervousness. Compared to lightning and lightning, the darts in dreams point out, indicate with precision and bring attention to something specific, a possible problem, a doubt, a conflict.

Dreaming of being hit by a lightning bolt – connects to a shock received, in need of a sudden but healthy shock that calls into question what is being done and changes the circumstances. It is equivalent to the need to start again through a moment of blockade and chaos and then energetically start moving again.

Dreaming of thunder and lightning – Dreaming of lightning and thunder the images already treated are further highlighted by the presence of thunder in dreams that act as an amplifier of what appears in the dream, anticipating its strength and power.

Dreaming of hearing thunder – it is a message paying attention to one’s own emotional reactions, to possible outbursts of anger or to irrational gestures and words whose scope, announced by the roar of thunder, must be understood at the level of consciousness to avoid irreparable gestures. Can indicate latent energy you need to vent.

Dreaming of very strong thunder – as above but with greater force, it signals something concrete that must be recognized and avoided. It can also indicate feelings of guilt, the internal echo of a shock at once, the need to remember something.

Dream of a thunder from the blue – warning sign, warning and indication; the dreamer must be on his guard and not trust an apparently favorable and calm situation. Indicates problems and upset coming.

Dreaming of thunder and rain – accentuates the character of the symbol by approaching it to sadness, atonement or the need to wash away and get rid of what is oppressing. It is a symbol of both warning and solution.

Dreaming of a thunderstorm, lightning bolts and lightning is linked to the meanings of the temporal, to violent disturbances, to emotional excesses and possible internal and external conflicts.

It can relate to the metaphorical storms that the dreamer must face: problems, difficulties, obstacles. In these dreams lightning, lightning bolts and thunder reinforce the action of the storm, show it in action in all its violence and aggressiveness, therefore they also allude to an intensity that precedes the exhaustion of the event.

This is the positive aspect of the symbol: the ability to resist adversity and confidence in the future.