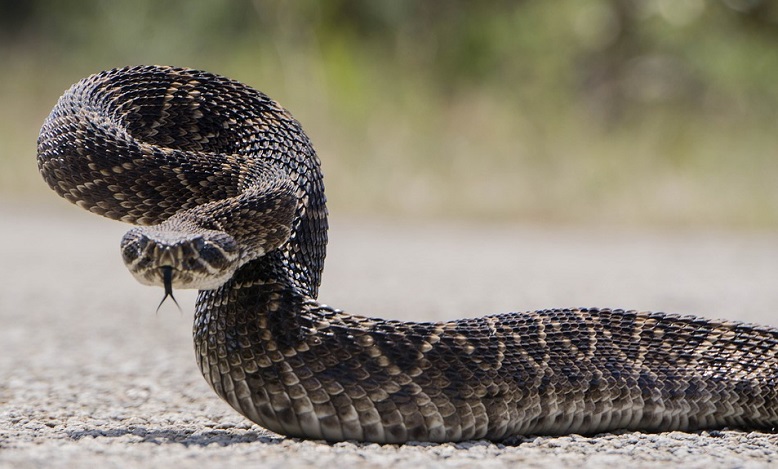 Mostly we can hear the rattlesnake before we see it: with the help of a rattle made of horn rings at the tail end, this poisonous snake species can give a warning if it is attuned aggressively. The rattlesnake Europeans mostly know only from movies or stories, since it is native to America.

In the mythology of the Native Americans, the rattlesnake plays a major role, such as the snake dance of the Hopi. Through the literature, it was also included in the European linguistic usage, for example in the phrase “poisonous as a rattlesnake”.

Thanks to modern medicine, rattlesnake bites are rarely lethal to humans.

Especially if you only hear the rattle, but you cannot see it, it looks very threatening, you are stuck with something sneaky, devious.

Depending on how the rattlesnake appears in the dream, it can have different meanings.

In general, it stands for the time that elapses in the life of the dreaming, seeing they can point to the future and impending struggles or difficulties. The dreaming is warned to take good care of himself and his own.

If he only hears the snake rattle but cannot see it, the dream symbol refers to an event from his past. Either he can make up for a mistake he once made, or someone will pay for an injustice he inflicted on the dreaming.

If the dreamer is bitten by the rattlesnake, then this is considered a bad sign, he faces heavy fighting or trials, on which he should prepare himself well. Maybe he fears for his safety or is afraid for close people.

Also, to see the snake’s fangs in a dream is interpreted in this direction.

On the other hand, if the rattlesnake is dead, it symbolizes a surviving life test that the dreaming has successfully completed.

The rattlesnake often appears as a dream symbol when the dreaming has the feeling that something is wrong. With the rattle at the tail end she warns of imminent danger.

This can be both real, for example, because the dreamer feels that he or a loved one is not feeling well, or it can be an unfounded fear expressed in a menacing snake dream.

It can be about financial worries, conflicts on the partnership or health problems.

If the rattlesnake’s dream often repeats itself, then the cause of the malaise or anxiety should be investigated. If you experience not just one animal, but even two rattlesnakes, the symbolic meaning of this dream animal is doubled: there are two issues that will cause problems for the dreamer.

Often it can be two people who actively oppose the dreamer and his plans. It says: show fighting spirit!

Spiritually, the rattlesnake embodies in a dream the journey of life and the continual passage of time. To understand what it means to dream snakes it is necessary to bring attention to the sensations felt: fear, repulsion, panic or, at best, a sense of danger and mistrust towards an animal considered dangerous, deadly, and abject.

All strong emotions justified by the awareness that the snake can kill with poison, crushing, devouring its prey. Dreaming of snakes is connected to the archetype of the enemy, to death, to hostility, to betrayal and to lies.

But the same dreams with snakes sometimes leave a strange feeling of completeness, as if the dreamer let himself be bewitched by the vital energy that this animal emanates and felt in itself.

These are dreams of great power that can fall into the category of great dreams, which bring new revitalizing energy and often signal the passage to a new phase of life.

Jung speaks of the snake as “a vertebrate that embodies the lower psyche, an obscure psyches, that which is rare and incomprehensible mysterious” (CG Jung “L’homme à la découverte de son ame”. Structures and function de incoscient – Geneva 1946).

Dreaming of snakes then expresses a probable conflict between conscience and instincts, the need to bring to light or recognize the vital impulses, the indication of some inner strength that, taken in examination, can indicate possibilities of healing and renewal.

To understand what it means to dream of snakes it is necessary to examine different symbolic areas from which different, coexistent meanings can arise, correlations with the reality of the dreamer.

Here are some of the most frequent dream images in which the snake appears in dreams and their meanings.

Dreaming of snakes is one of the most common dreams that presents infinite variables and transformations and that is affected by the sensations of the dreamer and the dream context in order to be analyzed correctly.

The appearance of the snake in dreams, its attitude, the actions it performs, are the first level of investigation to be carried out to gather significant elements that will guide the subsequent analysis.

Dream of a giant snake – it brings to the surface the extent of a problem or of a power greater than its own in whatever context it presents itself.

In this case the problem is perceived as something “big” of unique or insurmountable and, depending on the emotions that the giant snake in dreams causes: terror, mistrust, fear or admiration, we will move towards sexual environments or instinctive drives and vital and transformative that are going back to consciousness and want a recognition and a space in the reality of the dreamer.

Dream about small snakes – they can allude to the first sexual impulses felt in preadolescence, or to needs and instincts that have a NON-worrying extent and that can be managed.

Small snakes in dreams can be the symbol of characters of the lowest caliber who disturb and irritate without being dangerous or of very young people or even children in which they perceive smart, treacherous and false behavior.

Dreaming of a hairy snake – often draws a person close to you who has very pronounced virile characteristics: a friend, a husband or a friend with lots of hair and hair whose behavior is presented as worrying, insidious and anomalous.

Dreaming of a headless snake – brings to light the absolute blindness of reason in the face of instinctive impulses, the impossibility of giving them direction, of bringing out aspects of reasonableness. The headless snake in dreams is an image that must make the dreamer think about the tendency to let go and give too easily to what he feels.

Dreaming snake without tail – it may allude to a circumscribed problem that does not lead to consequences or trailing (the tail), or to an internal impulse that cannot be channeled and that emerges only as a force and without the possibility of finding an acceptable direction in the reality of the dreamer.

Dreaming of snake biting its tail – is one of the oldest symbols: the arborous and indicates completion and wholeness. In dreams depending on the emotions it causes can have positive or limiting meanings?

In a positive sense it can allude to the completion of a cycle, to the end and beginning of a phase of one’s life or even to the end of a project, to a successful realization.

In a negative and limiting sense, it can reflect endless brooding, projects that have begun and never ended, or a perennial and landlocked agitation.

Dream of a poisonous snake – it is a sign of danger and negative influence. It is often linked to unconscious fears that arise in relation to neighboring people, or to what is felt in oneself, to impulses that cannot be controlled and that can “poison” the image of oneself.

Dreaming of a tangle of snakes – it alludes to conflicting psychic forces, to confusion and uncertainty, it can indicate the “tangle” of sensations and feelings linked to natural impulses, the need to untangle them, to give them a name, to make them emerge, to experience them.

While at an objective level it can indicate aspects of one’s own reality that are incomprehensible and a source of fear and mistrust, situations in which great care must be taken to defend oneself from others. A snake coiled in dreams is also the symbol of Kundalini, the vital and libidinal force that is awakening.

Dream of an albino snake – highlights a diversity and an exclusivity that aims to capture the attention and that can refer to the vital and sexual energy and to the Eros that are awakening in the awareness of the dreamer. These are aspects that must acquire greater definition, which must find their “color” (be visible, recognizable, and perceptible).

Dreaming of molting snakes – it is a very clear metaphorical image that alludes to the need for inner transformation, to the need to “change skin”, renew itself, grow and mature, face reality with new tools.

Snake that speaks in dreams – what is said by the snake in dreams can be considered a message of the unconscious that is expressed through the instinct and needs of the dreamer.

Often the requests of the snake are quite clear, sometimes they require more reflection, but they always reflect an ancient and profound part of oneself that is appearing and that can be integrated.

A snake that speaks in dreams can connect itself to the archetype of the Old Sage, the Hermit and the Magician and bring to the surface a knowledge and a buried wisdom that the dreamer does not know and needs.

Dreaming of snakes with legs – they represent a stage of superior evolution, reptiles that DO NOT crawl, but move on their legs.

They can represent the most disowned and archaic aspects of oneself that are evolving in a less elusive form and far from the consciousness and reality of the dreamer. They are unconscious contents that are being transformed.

Dream of snake eggs – shows the incubation of a situation that can become difficult and dangerous or that can hold surprises and evolve unexpectedly with all the unknowns that the future reserves (positive or negative).

Dreaming of struggling snakes – reflects an internal struggle, a possible conflict between parts of the self-linked to the instinct that are emerging in the psychic dynamics of the dreamer.

Taking into consideration the objective level of the image, one can think of conflicts between people with fear and mistrust.

Dreaming of snakes as gifts – dreaming of receiving a snake as a gift indicates the possible interest and sexual desire of the donor, while in the opposite situation

Dreaming of flying snakes – it has archetypal meanings, it is linked to the symbolism of the dragon and the myths of transformation. It can indicate the emergence of the serpent in psychic dynamics and its domination.

Which means instinctive impulses that overwhelm reason and manage to escape control. Or it may represent the strength of the snake (positive and negative) in the fantasies of the dreamer, the attraction or repulsion it causes.

Dreaming of snakes, beyond the fright or repulsion that this image can cause, reveals the presence of a great vital energy available for the dreamer, but it can also highlight the situations of discomfort and insecurity that these live, if surrounded from people who, in his unconscious, take the form of “snakes”, because they are perceived as unreliable, cold, cruel, treacherous.

For Freud, dreaming of snakes is connected to the sexual force, the creative expression and the power of the masculine. Think of the very common presence of snakes in the dreams of adolescents where they embody the repressed libidinal power typical of this age, bringing to the surface fear and desire.