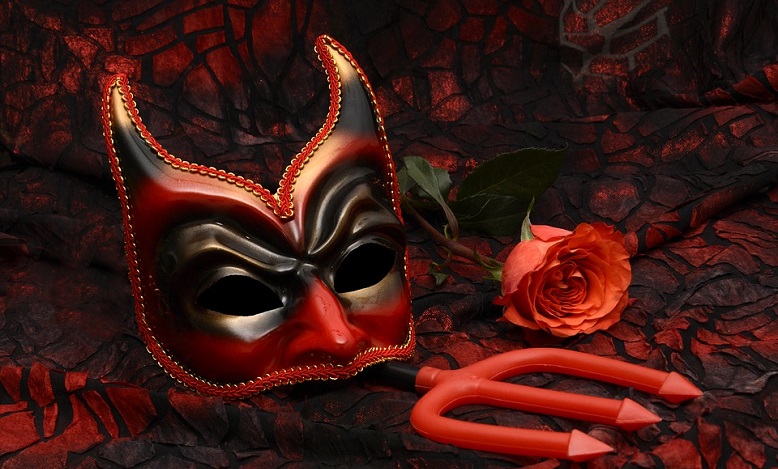 The devil in dreams concentrates in himself all the instances of the shadow of the Jungian matrix, reflects the renegade aspects of the personality, embodies all the instinctive behaviors that have been removed from the conscious due to the education received, but also all the conscious behaviors that undergo the judgment of the most conservative parts of the psyche.

It can represent contents of the unconscious that risk submerging the conscience, obsessive fantasies, temptation and relative fear of yielding, attraction and relative condemnation for what is considered forbidden.

The devil in dreams can be a symbol of temptation: something forbidden that entices the dreamer, someone who attracts sexually (think of the expression: devil tempter), but can also bring attention to ambiguity, betrayal, devious and twisted situations.

The depiction of the devil in monstrous forms spreads in Romanesque and Gothic art combining elements deriving from the classical, Nordic and Oriental traditions.

The idea of ​​diversity, of overthrowing human and divine connotations, is the basis of the iconographic representation of the evil one, whose corporeality assumes elements of exaggeration.

In Christian culture, the aim is to impress and frighten sinners with the threats of hellish torments.

Until the ninth century, the devil is portrayed with humanoid features: he is a small and deformed old man, or a giant, but with claws on his feet. Something similar to the French gargoyles.

Later, he began to appear more frequently in animalistic robes, in the wake of medieval imagination and almost always recalling in some way snakes, cats, wolves, goats, and bats, sometimes redesigned with grotesque modalities.

Of great interest is the use of formal and structural elements taken from the world of insects. And it could only be the painters and engravers of northern Europe, in their meticulous analysis of the real, investigated and dissected with the curiosity of an entomologist, to excel in this very particular iconographic vein, which combines scientific precision and visionary elaboration.

Artists such as Schongauer, Dürer, Bosch, Teniers, Bruegel, Cranach, and Grunewald have often insinuated into their own bizarre works and – from time to time – gruesome, amusing, subtly disturbing demons masked by tiny invertebrates.

The devil in dreams is the denial of the dreamer: he embodies the sub-personalities that in the growth span have been set aside because they are deemed useless, inconvenient or scandalous and that now lie deep in the psyche. Each of these energies disowned and not listened to, will take on a “demonic” connotation and become in the dreams and fantasies the devil, the dragon, the black man, the beast.

In the historical roots and in the philological sources of every religion, starting from the Christian one, a pivotal episode is traced in which the sharp division is made between a God source of all goodness, knowledge and power and his evil adversary. This division establishes the end of every ambivalence within the divine and creates the Evil-Good polarity that is manifested in the high of the divine light and in the low of the darkness in which the devil dwells.

The devil in dreams and in the reality of monotheistic religions is the fallen angel, the one who, having come out of the grace of God, separates himself from the good and becomes its antithesis.

The devil is the archetype of the “separation” from love and the original good, and reflects, in the growth of the human being, an identical separation from the primitive feeling of divinity attributed to the parents. To understand the symbol of the devil in dreams it is necessary to reflect on the meaning that the devil has in the reality of modern man.

Judging by the terrifying power it has in dreams, one would say yes. Beyond religious beliefs the image of the devil in dreams and in collective fantasies seems to belong to the collective unconscious of all cultures. For the man of the XXI century the devil still represents evil, darkness, lack of control all that is irrational, outside the rules of civilization, what disturbs and from which we cannot defend ourselves.

In the popular tradition the devil in dreams always has a negative meaning linked to the betrayal of friendship or love, to torments and suffering of the dreamer, to death.

On the psychological level, the oneiric devil is a symbol of every instinctive impulse linked to the satisfaction of carnal pleasures and, in the sense of “enemy-adversary-evil-predator”, is one of the first archetypes that are activated during childhood in children’s nightmares.

Dreaming of being chased by the devil – will make you reflect on the aggressive and sexual impulses that are not vented and on the socially judged emotions: hatred, envy, lies, betrayal.

Dreaming of a devil in the flames – of the fire will bring the attention of the dreamer especially on feelings of anger held in check and on the inability to express what he feels.

Dreaming of a black devil – it will be connected to the symbolism of the two colors and in particular to passion and sex (let us remember that the sexual drive is always the most disavowed and therefore the one that most easily finds its outlet in dreams) for the red color, extremism and rigidity rejection for black.

Dreaming of a known person knowing that he is the devil – indicates doubts, fears hidden in the unconscious of the dreamer, shows that person as a temptation or as a treacherous person to beware of. This image should not be taken lightly and you should not generalize on a possible meaning.

Dreaming of the devil who has the appearance of your partner – the situation will have to be carefully examined. Perhaps the dream expresses sexual content, but it is easier to bring to light the temptations, misunderstandings, fears, things unsaid.

Here the devil in dreams has a tempting role to which the dreamer gives way with fear and pleasure and symbolizes intimate energy.

Perhaps the dreamer thinks that sex is a thing to be ashamed of or lives feeling guilty, or perhaps doesn’t allow herself to live it.

The fact that the devil is represented here by a known person shows that this person is attributed the same qualities of temptation, fear and desire that emerge in the dream.

Dreaming of being suffocated by the devil – indicates that internal tensions are at a guard level and need to be vented. You will also have to reflect on your own reality.

The creativity of the unconscious in proposing the image of the devil in dreams has no limits, the situations are imaginative and innumerable and it is impossible to take them all into consideration, what is important is to focus on these dreams without escaping them, because despite the fear it causes and the dismay that leaves in the wake, the image of the devil in dreams is very vital and full of energy.

Dreaming of the devil can leave fear and doubt, but it will surely leave an imprint in the mind of the dreamer, and a dream elaboration work done with a voice dialogue session or a guided return session in the dream will be of great help, in addition to bring great surprises.

Because the devil in dreams however evil, angry, threatening is still a part of the dreamer who is not listened to or who has been brutally repressed.

Therefore it contains in itself a vital charge, it contains aspects of the natural drives or of the real inclinations of the dreamer that has not been given a way to express itself that have been “castrated”.

And the more silence and censorship over these dissimulation operations, the more internal compression is created, as happens with a pressure cooker without a valve, and the more these psychic energies appear with a furious, demonic, extreme appearance and are embodied in dreams as assassins, tyrants, monsters, demons.

And, paradoxically, this is good, because these repressed energies that manage to escape the control of consciousness in daytime life can do a lot of damage.

More or less serious episodes of violence, quarrels, aggressive gestures, words of which we will regret later bitterly, are the example.

It is important to understand that dreams about the devil can have a positive purpose. Through the devil in dreams these violent and destructive energies find an outlet and the pressure is loosened. Here is the beneficial possibility that exists behind this symbol.

The appearance in the dream of the devil can be quite disturbing and frightens many, but as always when we talk about dreams we must not panic. We must go in search of the possible meanings that lie behind a given dream appearance.

We begin by saying that there is nothing supernatural about the appearance of the devil in a dream and psychoanalysis tells us; what does it mean to dream the devil, then?

In dream visions, the devil represents a sort of element of rupture, but much of the interpretation depends on the way in which the devil appears in the dream.

Sometimes, in fact, you don’t see it but you only perceive it, or you hear a deep and deep voice that speaks and that can be attributed to him.

On other occasions, instead, it is revealed in the “classic” version – if one can define it like this – with horns, hooves and a fiery red gaze.

In many cases, the devil who appears in a dream represents the shadow, that is to say those aspects which a person does not accept and from which he is even intimidated. Here, then, that that fear takes shape in dreams and takes on the features of the devil.

The dark side – represented precisely by the devil – manifests itself in the unconscious precisely because it is repressed by the rational side, but it cannot be ignored; therefore, it is necessary to try to understand what lies in the shadows and also to come to terms with what you like to achieve greater balance.