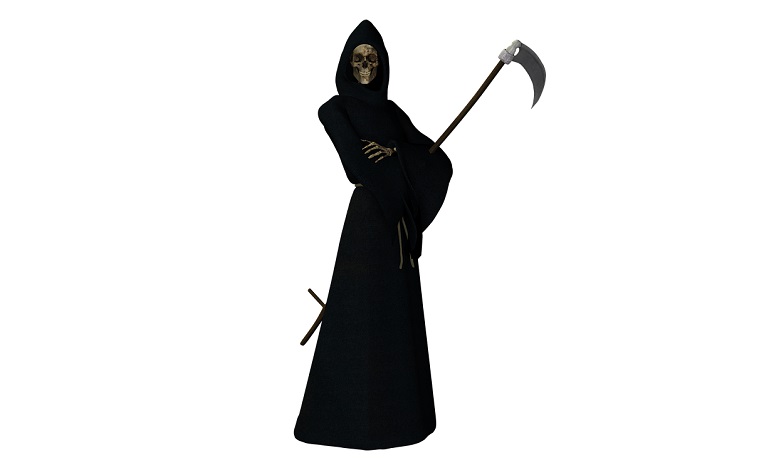 Fortunately, dreaming of death in person is not a very frequent dream: I say fortunately because, as one can imagine, it is quite disturbing to see death personified in a dream, that is, the typical image of Death: the skeleton dressed in black and with the sickle in hand, which comes to take you to take you away.

To reassure you, I tell you right away that this dream has nothing to do with your death, it is not a premonitory dream.

Dreams about the Grim Reaper – Meaning

The habit of representing the concept of death as being personified is very ancient; it is found in many religious texts, first of all, which then inspired paintings, paintings and artistic representations. The Bible and the Koran contain various references to death as a dark and mysterious being that takes the soul from the living and takes it to the world of the dead.

The idea of ​​death, as an invisible and abstract force, has gradually been transformed into a being endowed with a humanoid form; this has helped man to make himself a reason for one of the greatest and unfathomable mysteries: that of the end of our earthly existence.

Around 1400 the classical iconography of Death spread as a skeletal being, wrapped in a black cloak with a hood; he brings with him an hourglass that represents the passing of time granted to men on this earth, and a sickle that has the purpose of ‘reaping’ the lives: this is the usual representation of the Sad Reaper, the Death that ‘mows’ our lives and gathers our souls as if they were a harvest.

Sometimes Death can be represented as a woman dressed completely in black, who appears suddenly, usually without speaking.

There is also the Angel of death, which appears in the last moments of life.

This representation may appear in dreams, but fortunately, as I said, in dreams, seeing Death appear in person has nothing to do with your actual death; as, in general, all dreams of death, the meaning is more metaphorical.

Death in person represents the passage, the transition, the end of a phase of one’s life and the beginning of another.

Changes (loss of work, end of a relationship, etc.) are often difficult, you are afraid of not making it, but there is always a part of you that remains strong and helps you find a way out too when everything seems lost.

Death who appeared to you can represent a threatening and disturbing element, something that lives in the shadows, ready to pop out suddenly to terrorize you.

Perhaps you have a sort of ‘deadline’ that presses you, you feel as if the “time” you have available (perhaps for your project or an important stage in your life) is about to expire, resulting in a feeling of failure.

Dreams about the Grim Reaper – Symbolism

It is the case of dreaming about the Grim Reaper, a dream that can make you think that it is premonitory and that your time has come. And in a way it is, but it’s not about your time to die. Discover in our dream dictionary what it means to dream of death personified.

When dreaming of personified death or other dreams related to death, it is almost inevitable to think that these are bad omens or bad premonitions, but it is not so.

In classical mythology, the Grim Reapers were three sisters who symbolized the destiny of human beings and also governed the existence of the gods. They were powerful and feared divinities but in reality they represented birth, life and death, that natural and inevitable cycle. That we fear death is another issue that has nothing to do with the meaning of dreams.

From this point of view, the arrival of the Grim Reaper to your dreams should not frighten you, since it is not a nightmare. And you may think that your time has come, indeed, but not the time of death, but the time of rebirth. Do you know what the Phoenix does when it dies? Exactly, reborn from its ashes and begins a new cycle.

What if the message of the Grim Reaper is precisely that it is your time to start a new life? Do not get carried away by socially accepted fears because death in dreams has no negative interpretations. Reborn, renewal, turn the page, close the book. And start a new and happier one.

The term grim reaper is a euphemism, a beautifying word for death. Dying and death are topics that are still taboo after all. Instead of naming them directly by name, they used to prefer rewriting such as grimmer reaper, friend Hein or Grim Reaper.

At the same time, dying is something very abstract. In order to make it tangible and vivid, death has been personified: often wearing a cowl and a hood, he comes to the people as a skeleton and cuts off the thread of life with his scythe.

The Grim Reaper is therefore a figurative representation of death. As a reminder of the transience of life, he is carved in stone in many old cemeteries, and also on paintings, especially the Renaissance and the Baroque, he is a frequently found motif.

A grim reaper in the dream certainly provides for fear and terror. The fear of one’s own death and the uncertainty of what comes next makes the dreaming panic.

Added to this is the concern that a close person may be in danger. For the dream interpretation one should ask oneself in connection with the dream symbol “Grim Reaper”, from which part of his life one would like to part.

With the Grim Reaper we usually associate transience, the passage of time and the loss of life energy. Thus, as a dream symbol in the interpretation of dreams, he is an admonisher, who invites the dreaming to live consciously and to use the day.

In a symbolic act, the grim reaper cuts out superfluous and unimportant aspects of life in a dream. This creates space for things that are really important to the dreaming.

In the interpretation of dreams death is rather positively occupied. Thus, the dream symbol “Grim Reaper” represents the end of a period of life, but follows in the sense of the eternal cycle a new beginning. The dreaming should check what changes in the time are and to what extent he wishes them for themselves.

In addition, the dream symbol “Grim Reaper” can be a sign of a lack of life in interpersonal relationships. In dream interpretation pictorial death stands for cold feelings. A friendship or a love relationship may come to an end, and the dreaming feels this, but may not yet believe it.

Often the Grim Reaper also appears in the dream, when the dreaming is at a vertex of his life. He may have achieved everything he wished, and the dream symbol challenges him to think about himself.

In the popular interpretation of dreams, the dream symbol “Grim Reaper” promises liberation from a burden. To see him in a dream is considered an omen for a long life.

The Grim Reaper stands as a dream symbol for becoming and passing away. In the interpretation of dreams he is a symbol of change and change. The subconscious mind shows the dreaming the way he should go in his new life.

In addition, it helps him in the dream to separate from aspects that belong to the past and have long since died. If you dream that the grim reaper takes a known person with you, the dream symbol is a sign that you have already distanced yourself from it internally.

Diving in the company of the grim reaper in the dream, who have already died, this points in the dream interpretation on the deep connectedness of the dreaming with these persons. The bond is sustained beyond death. Maybe the dreaming even unconsciously tries to please the deceased.

When the dream symbol “Grim Reaper” appears to pick up the dreaming himself, this means in the dream interpretation a mental purification process.

The dreaming in the dream undergoes a purification and is aware of the opportunities that he has not used previously. His subconscious reminds him to be more aware of his life in the future.

The grim reaper as a dream symbol is an expression that the dreaming unconsciously deals with death.

He accepts that dying will separate body and mind and continues the thought in the dream.

In the interpretation of dreams, the Grim Reaper is the image of the inseparability of life and death, not as a contradiction, but as two poles belonging together.

The dream symbol “Grim Reaper” embodies in the interpretation of dreams on transcendental level omniscience, resurrection and spiritual rebirth.

The dreaming has arrived at the end of a life’s journey and enters a new phase. The Grim Reaper offers us spiritual help in the dream.