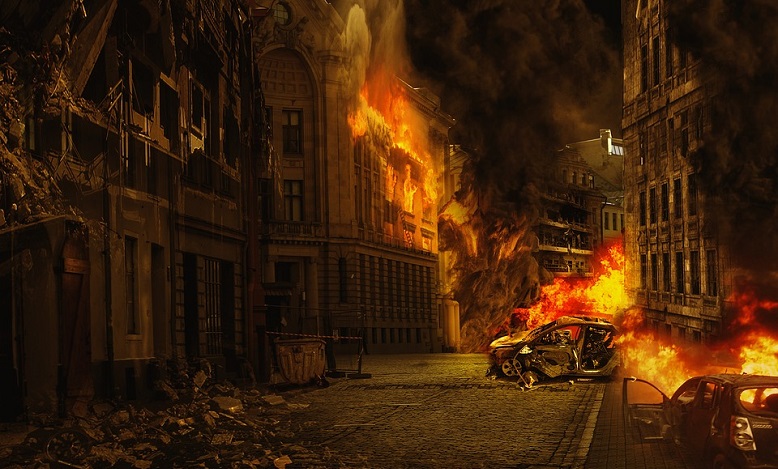 Dreaming of war is never a pleasant dream experience for the dreamer who comes across this image. Whether it is a war to which we witness as mere spectators or who instead takes an active part in the conflict, dreaming of war denotes that inside or outside some important conflict is coming to the surface and cannot be further delayed.

Through this expedient, which is anything but pleasant, the unconscious then tries to open the eyes of the dreamer in the face of something he tries not to see and against which he could violently impact shortly if he does not seriously face the problem upstream.

Linked in the past to the superstition of future negative events, to date in the interpretation of the dream of a war the idea of ​​the emotional conflict of the dreamer is preferred rather than the prediction of other disasters.

Ideally, the war is aimed at the destruction of evil, the restoration of peace, justice, harmony, both on the cosmic and social and spiritual levels; it is the defensive manifestation of life. Krishna and Arjuna in a chariot of war, as narrated in the Mahabharata. It is the function of the chatryas, but in the Bhagavad Gita it says that neither one kill nor another is killed; it is the domain of action, of karma yoga.

In Islam, the passage from the small holy war to the great holy war is that of the cosmic equilibrium to the inner balance. The true conqueror, the jina, is the peace of the heart. The same symbolism can be found in the action of medieval military orders, and more particularly in the Templars.

The legendary combats of the Chinese secret societies are battles for initiates. In the mystical sense, war is the battle between light and darkness. Buddhism, though peaceful, uses the symbolism of the warrior a lot: the warrior shines in his armor, it is said of the Buddha himself in the Dhammapada.

Warrior ardor is expressed symbolically by anger and heat; the ritual sacrifice is assimilated to the rite of war. In traditional Christian texts, it must also be understood as an interior war. Holy war is the fight that man waged in himself. It is the confrontation between darkness and light.

In dreams war often means only one thing and its symbolism is almost always interpreted as a sign of a conflict, be it internal or external. What does it mean to dream of war? Men, women and children running to take refuge, patrols, the advance of tanks, noise, dust and rubble.

The battle in dreams can be dreamed this way or in others. We can find images that refer to World War I or II, or old battles such as the Crusades or the French Revolution. At other times it will still be a war set in the future. But a war is always a war and conflict is the main reason.

We can dream of being at war with someone, an enemy, our parents, with lovers, work colleagues or universities, but whatever its final meaning from which derives what is most likely experienced as a nightmare, it is necessary to resolve the contrast.

Is war in dreams a metaphorical image of an inner war or conflicts external to the dreamer? Or is it a symbol linked to fear, memories, impressions received? In this article we consider the war in dreams to discover the possible meanings, the connections with reality and with the objective difficulties against which one “fights” daily.

The dreamer can assist you as a spectator or actively participate in it, he can be executioner or victim, but the constant of these dreams, which concern the destruction and annihilation of something or someone, is always anxiety, disturbance.

The war in dreams can indicate an inner conflict of the dreamer, a lack of balance in his life that is expressed in violent form, the emergence of parts of the personality that oppose one another, problems and external conflicts that have become invasive and disturbing.

Making war in dreams is tantamount to trying to resolve or eliminate what is believed to be “evil”, what this evil comes from and that can damage or destroy if left free to express itself.

But the war in dreams can also reflect the inability to make a choice, to feel opposed feelings about the same issue and not know how to face them, to feel a real bombardment of ideas, internal demands, possibilities that overlap, to be overwhelmed.

To understand the meaning of war in dreams we must start from the experience of war in reality. In the common idea the war starts from a principle of safeguard (of the territory, of the ideas, of the religion, economic) and of hypothetical justice.

But we must not forget that the war in dreams and in reality responds to one of the most deeply rooted and most disavowed instincts in the human being: aggression that can turn into blind violence and that, in war, has always found justification and an accepted channel of expression.

In images of war in dreams there is a component of violence and destructiveness that compensates for the sublimation of natural aggression that occurs in civilized societies.

So the more peaceful and non-reactive will be the attitude of the dreamer in the face of the injustices and difficulties of his life, the more likely it will be for him to dream of war, to dream of fighting or dreaming of war scenes in which his aggressive and violent aspects will take over.

Dreaming of war – it can indicate lack of serenity, tension and continuous struggle, atmospheres of “war” in progress. Fight that can also be underground or disguised. Precisely for this reason the dream makes it explicit, presents it to the dreamer as a reality that he cannot recognize in the waking state.

Dreaming of a battle – (being a spectator or being a protagonist) can be considered a metaphorical image: a similar battle is being fought inside oneself: perhaps there are choices to be made, decisions that are difficult to make, perhaps you are trying to change your life, perhaps intimate relationships have turned into a real battle.

The purpose of the war in dreams is to make the dreamer reflect on his own life: in what aspects he is always fighting, how strong is the tendency to “feel right” and to consider others “wrong”, what are the decisions that tear him apart and who can’t take. These are the questions to ask

Being honest with yourself by answering these questions will help you to identify the aspect of your reality in which you are fighting and to which your “war” in dreams refers.

Dreaming of a bomb that explodes – may refer to something explosive that has disturbed the dreamer’s quiet and habits: think of the expression “This thing was a real bomb” referring to something sudden that shook, intrigued, worried.

Dreaming of fighting in war – in addition to the meanings already highlighted for the war in dreams, it can also indicate the need to “fight one’s own battle”, another precise expression that stimulates us to follow our dreams, to commit ourselves to what we believe, to defend our ideas in front of us to the others.

As always, they will feel the emotions that will move the needle of the balance towards meanings linked to dreams of conflict or dreams of encouragement and action.

Dreaming of dying in war – it can indicate the fear of succumbing to a conflictual situation, the fear of having to change one’s habits, of having to renounce one’s safety or the results achieved.

Dreaming that a war has broken out- and is waiting with the fear of what will happen reflects an insecurity and an inability to cope with some event or some conflict. Dreams show their tendency to suffer and be influenced by events rather than reacting and facing things.

Dreaming of a science fiction war – reflects, in adolescents and young people, the impressions of films or video games seen and played. Impressions that turn into a dream-like “smart” scenario in which the individual unconscious decides to set, vent and shape the aggressive and sexual needs, anxieties and impulses of the dreamer.

The aim is to ensure that the dream is remembered, that it affects and provokes emotions and tensions equal to those that the game or the film move in reality.

So what does this dream mean? Certainly indicates a need for calm and slowness, a need to replace the violent impulses of moving images with fixed colors or images of nature.

Dreaming of an atomic or post-atomic war – it makes one think of great doubts and anxieties that oppress the dreamer, of his fear of not being able to move forward, of being overwhelmed by reality or by some specific event, of not having a chance of escape. It is a dream linked to great fear of the future and its unknowns.

Dreaming of being at war – it may indicate a moment of objective difficulty in which one must “fight” against adversity or against problems that appear insurmountable.

Even if the stress level is high and all the forces are concentrated in the effort to face what is happening, it is possible that the dreamer does not feel great tension on a conscious level, perhaps this situation has become the norm for him, perhaps he has refined the his way of proceeding and “fighting” has become automatic, perhaps he no longer realizes how much his reality is a struggle.

The war in dreams then becomes a dreamlike expedient, a way to force him to confront the situation he is experiencing and, emphasizing the tones of violence and fear, make him become aware of a reality that has become unmanageable or worrying for the parts of his more peaceful personality and myths.