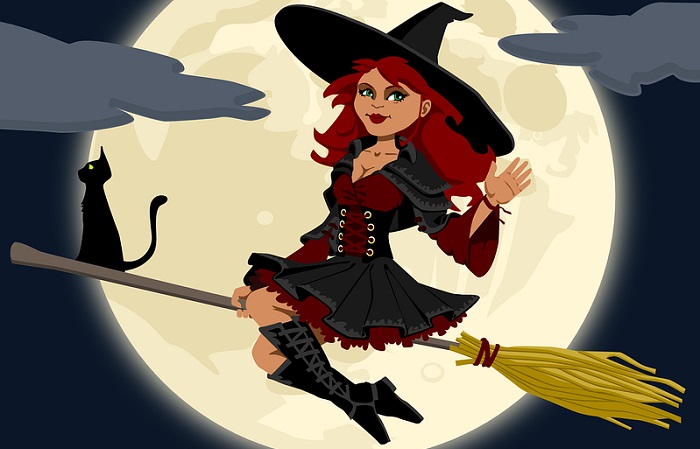 Dreaming of a witch represents for the dreamer the “shadow” of the feminine archetype, the opposite pole to the idealized woman: the princess, the priestess, the Madonna, the innocent girl, the good mother.

All the less noble feelings are attributed to the witch: envy, jealousy, ill will, and the most vile instincts: unbridled and limitless femininity, voracity and wickedness.

The witch, as an antithesis to the maternal goodness, to the beauty of the girl and to the “good” knowledge of the priestess gathers all the projections of the most infantile and uneven male, but often also coincides with the independence from the most reassuring and conformist expressions of the feminine. In today’s text we are going to discuss what the witch symbol represents in our dreams.

There are no witches. Everyone knows that! But there was a time when people could not explain much. Why was there lightning and thunder? Why did you get sick?

Questions like these have always been a big mystery to people. And often such events simultaneously had a strong influence on fate.

In order not to be at the mercy of the whole thing, they sought a scapegoat who could be blamed for serious diseases, storms or other blows of fate.

And, in a broader sense, we can consider the result of the oppression and repression of male power towards female diversity, towards a power that takes alternative and uncontrollable forms.

Think of the witch-hunt of the Middle Ages, of all midwives, herbalists, scholars or women outside the box of the time, burned like witches.

But even the fairy tale witch in the classic iconography of an ugly old woman, curved, badly dressed and warty, can be considered the shadow of the mother or of other female figures: she is a bad mother, a witch grandmother who collect the childish fears towards aggression or the violence perceived in the figures of reference or towards the unknown that populates the world outside the loving maternal arms.

Even the sorcerer in dreams expresses the dark aspects of the psyche: the shadow of the masculine which exerts its influence in the life of the dreamer and which can represent the absolute and malign power attributed to the father, to the husband or to another family member, the search for authority and supremacy over others, distorted and functional knowledge for the celebration of oneself and one’s own power.

The witch is free, the witch devotes herself to what she wants and that makes sense to her, the search witch and possesses a power precluded to the common woman.

Dreaming of a witch can also bring to the surface the hidden feminine power held captive by the expectations of others and by social norms: the desire for a life different from that which others pursue, the disregard for what others think, the pride of own diversity and the will to defend it.

Not to mention that the epithet “witch” is also used for bewitching and seductive women who use their charm to achieve their goals. Think of the expressions: “You are a witch” “You have bewitched me” gave the woman he loved and desired or the friend who has achieved something impossible.

But both the witch and the sorcerer in dreams are linked to the renegade aspects of the personality and recall the dreamer to the need to immerse himself in the depths of his own being to recognize his “evil, his darkness, his anger” (or his own “originality”) and anti-conformism “) to accept and transform them into empowering aspects, new possibilities and new experiences of independence and self-realization.

For Freud the witch is the expression of the castrating mother or of the woman who no longer loves herself, an energy that blocks affectivity and natural and happy intimacy.

Dream of a witch – besides representing the disowned aspects, for a woman it can indicate the fear of intimacy, of her personal power and the lack of self-confidence.

Dreaming of a gathering of witches – it means watching something secret. It is possible that the dreamer unintentionally caught an ambiguous situation or listened to equally ambiguous sentences that struck him in depth.

Dreaming of being a witch – the unconscious brings attention to the part of the self judged by the conscience and compared to a witch. This can happen if the dreamer behaved badly (like a “witch”) with someone (a friend, her husband, children etc.).

Dreaming of being a good witch – represents the part of the self that wants to be different, that wants to stand out and have a certain power, but that fears the strongest and most dramatic aspects of the witch, who does not have the courage to recognize them. It often indicates insecurity, feeling invisible and irrelevant, the feeling of inadequacy.

Dream about a good witch – it means reconciling with “different” qualities perceived within oneself. More often it indicates a person close to whom one recognizes the power and the ability to “do magic” and to transform reality in a positive sense.

Dream a laughing witch – brings to the surface the seductive and bewitching aspect of the witch, her ability to emerge, her sensuality.

Dream of a witch who kills children – it is the image of the ferocity, the hatred, the anger that are buried in the unconscious and that have the power to condition and destroy dreams, projects and creativity of the dreamer.

Dreaming of a witch flying on the broom – represents the thoughts and suggestions related to the characteristics of the witch that are present in the mind of the dreamer.

Dreaming of a witch who curses – it is the expression of feelings locked up and repressed: they can be violent emotions that frighten the educated and integrated part of themselves, but that have a destabilizing force and claim attention. They are a sign of great malaise that must be collected.

Dream about a witch at home – indicates the part of yourself that has perhaps behaved like a “witch” or who suffers the judgment of conscience for his unconventional ideas or his attitudes that violate the norms of the environment in which one lives.

Dreaming of killing a witch – it means repressing one’s own “inner witch”. It represents the internal struggle between the most powerful impulses, primitive, indomitable and free from all conditioning and the primary selves adapted and determined to maintain control over the personality.

Dream of the witch from the Snow White – represents the contrast between candor and naivety and envy and jealousy.

Dreaming of a haunted house – it can reflect the fear of losing control, fear of being overwhelmed by the dark emotions that are felt within oneself or indicate a “haunted” family environment, that is, immobile, rigid and unpleasant.

Dreaming of a black witch –represents all the most negative and renegade aspects of the symbol.

Dreaming of a white witch – brings up the empowering and positive aspects: knowledge, freedom, charm, non-conformism.

Dreaming of doing sorcery – can have positive or negative meanings, will be the actions proven by the dreamer to give more indications. It can indicate the fear of the influence of others that becomes an obstacle or the awareness of being able to overcome a difficulty thanks to unusual qualities.

Dreaming of being a sorcerer –it represents the shadow aspects of the male archetype, the dark and malevolent power, the qualities of aggressiveness, irrationality, hatred and violence kept hidden by the dreamer, but it can also indicate one’s own personal power and the ability to transform a situation to one’s advantage.

Dreaming of a witch, dreaming of a sorcerer as well as showing the emergence of the instinctive and non-disciplined aspects that must find their place in the life of the dreamer, can highlight a conflictual relationship with a reference figure: the mother, the sister, the grandmother, an oppressive, manipulative or violent woman, or she can make sense of the ambiguous and malicious intentions of a neighbor or a colleague.