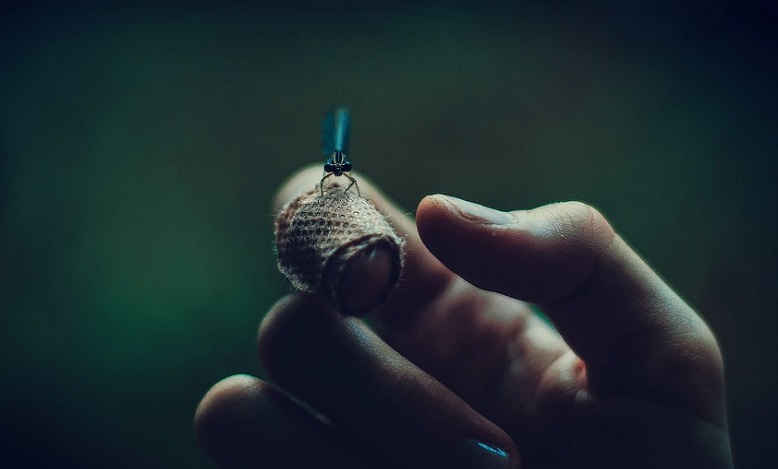 Fireflies are one of the symbolic animals of summer, when they arrive in the meadows it means that it is time to stay out in the evening, to celebrate and rejoice with friends in front of a cold drink.

They appear in the meadows illuminating small areas between the grasses, their scientific name is Lampiridi (Lampyridae) belonging to the family of malacoderm beetles and around the world there are about 2,000 species.

Fireflies have this characteristic of producing light, called bioluminescence, since their larval state, which derives from the oxidation of a substrate to ox luciferin that appears in the presence of oxygen thanks to the catalysis performed by the luciferase enzyme.

In adults, the function is linked to mating: males, in fact, emit luminous rhythmic signals, trying to attract the attention of females, who in turn emit light at different rates.

The intensity instead varies according to the species. Even the eggs are luminescent.

The firefly, a small insect of the beetle family, is known for a characteristic that has made it famous. The animal emits light illuminating the summer nights, thanks to an oxidation process.

There is no heat in the lighting produced, in fact it is considered cold and intermittently.

Its presence enriches the courting phase, but it also serves as a warning to predators, because oxidation makes the insect less edible, considering how fireflies produce a poisonous substance that makes them unattractive.

They are important insects but they lead a very short life, even if intense.

Despite their existence has long been put to the test by human interference, and pollution, these insects continue to animate green spaces and woods. Making the atmosphere immediately mystical and fairy.

It is no coincidence, in fact, that the fireflies are part of the mysterious esoteric world, assuming a specific symbolism and a well-defined role.

This small with a pulsating body has several meanings and, despite its limited appearance, it is a symbol of strength, creativity, perseverance and justice.

Even in the world of the natives of America the firefly finds a place as guardian of the field and of the foodstuffs, just judge against the thief fox.

While in ancient Rome the fireflies played the role of small handmaids and messengers of the goddess Diana, spreading her verb and her law.

What these insects symbolize perfectly equates to their body weight, which is both mental and physical lightness.

They represent intuition, inspiration but they play the important role of point of contact between the real world and that of dreams.

As magical messengers of the unconscious, bearers of the way and answers to be followed with sincerity and a renewed awareness.

The charm they emanate, the peace that they can transmit thanks to their fluorescent brightness, represents their purest soul and therefore spontaneously intriguing.

Thus says a sweet ancient chant for children about this little insect. Emblem of the summer evenings, with its bioluminescence, the firefly has always enchanted young and old, leading back to fairy worlds that smell of fresh grass and magical nights.

There is also the famous saying: “Do not take fireflies for lanterns” which invites you not to get caught up in easy enthusiasms, often bad advisers of wrong choices.

Lucciola derives from the scientific name “Lampiride”, the bearer of light, and in some southern dialects it is called “catecatascia”, an onomatopoeic word that would reproduce the lighting and the extinction of the small light. It represents an invisible guide in the collective imagination: an invitation to rely on instinct.

As in Peter Pan as long as the fairies survive, the ability of men to dream will also survive, in the same way, as long as these insects will be sighted, they will be able to trust in a world where something healthy still lasts!

Symbol of inner light, it embodies the hope that encourages us to resist in moments of despair. Also associated with the dream world, in some Japanese legends it would refer to the souls of condottieri who died in battle. A bit like the nocturnal moths that, in our southern tradition, would represent the fallen souls of Purgatory.

Around this curious animal, for which observation gatherings are organized at the points of greatest concentration – as in the Sele valley – legends, popular beliefs and different meanings revolve.

In the esoteric world, it is connected to the element of fire and symbolizes the spirit. The liquid that distinguishes it making it bright is called “luciferina”. Together with the light of the Moon, in ancient times the Romans linked it to the goddess Diana, also called Lucifera or Lucina.

In the Victorian era, people believed that when a firefly entered the house it prefigured the death of one of the family members. Even today, in some ways, among the negative meanings, it indicates deceptions and illusions.

To dream of one would predict the arrival of good news or an unexpected gift. Synonymous with fantasy and creativity, unconscious and intuition, inspiration, awareness. Awakening and enlightenment, perseverance and justice. It can still be traced back to the innocence of the child who, in pasture, feels amazement at what he does not know.

As children we enjoyed chasing them through the smell of hay to see them shine in half-closed hands and then release them. As if for a moment you want to lose yourself in the magic of this magic.

Under skies quilted with stars, inside the fields sprinkled with intermittent lights, we witness an extraordinary spectacle that gives peace to those who observe it!

The firefly, as well as in many nursery rhymes for children, we also find it in many legends. Among these, we have the one that tells of a farmer who, referring to the grain would have exclaimed the phrase: “Here is a treasure!”.

The fireflies, originally black insects, hearing this exclamation, would have ventured into the night with a light to shed light in the dark.

Not having found the loot, they would have been destined to wander on summer nights. To the search for gold, without having understood that true wealth is the color of wheat. That blond of the fields of July where they are lost in luminescent and hypnotic trails.

Another myth tells that once the fireflies came out only during the day and were not bright. One night, one of them rushed to the rescue of a dragonfly under the moonlight. Suddenly, dense clouds darkened the stars and in the dark a frog lurked to devour the two insects.

Suddenly the wind blew away the cirrus clouds from the sky and illuminated the moon which gave the insect some of its brightness.

Since then, it is said that the fireflies were never attacked by anyone and illuminated the darkness.

Yet another legend tells of two seamstress sisters who lived in the woods and were intent on sewing the wedding dress of the miller’s daughter. When the candles were finished, they remained in the dark, but the fireflies they had fed with honey and flowers heard their moans and rushed to help.

Only then could they finish the wedding dress, which shone brightly the next day. For this reason it is thought that on the clothes of the brides there is something attractive tied to the magic of glittering fairies.

Ok all these technical things are fascinating but they matter little, what we like about fireflies is that they are fireflies, and fluttering in the meadows, near the hedges and sometimes even on the beach, accompany our summer evenings, transporting the sky full of stars in land.

This small insect, so insignificant during the day, represents a beacon of hope during the night, it is in fact associated with “that which illuminates the invisible” which guides us in the dark moments and teaches us to live life in a simple way by following our instinct.

The firefly is an animal linked to the element of fire, and it is for this reason that it is often associated with the enthusiasm necessary to achieve one’s goals in life and in the inner light, the one that makes the spirit of each of us shine.

Moreover, being an animal that is especially noticeable at night, when darkness falls it is also associated with the world of dreams, spirits and the dead, in fact a popular Japanese belief tells that fireflies have the souls of the dead.

Some popular beliefs of the end of the 800 tell that if a firefly enters the house unfortunately someone will die within a short time, probably the belief was fueled by the discovery of the oxidation of luciferin that creates the bioluminescence of these animals, and the derivation of the name of the substance from Lucifer is easy to understand.

Related to the fireflies there are several very nice legends to read to your children when they meet and to “explain” the reason for their glitter.

At one time, fireflies were just small dark insects that roamed the cornfields. One day one of them heard a farmer who exclaimed: “There is a treasure here!” In the evening, a small firefly went to report it to her companions, who listened in wonder, without knowing what to do.

But the queen, more astute, proposed: “If there is a treasure, let’s go and get it! Tomorrow, at night to prevent us from being seen by the farmer, let’s go, each with a small little light, to look for it! “. The fireflies exited with their own lights, but could not find the treasure. Ever since that moment every summer night they still look for it, without knowing that the wheat is treasure.

A long time ago the fireflies were black insects, which came out of their lair only during the day, when there was so much light.

One evening, the moon had just appeared in the sky, a firefly was called by a small dragonfly that had injured a wing and could no longer return home, so the firefly put the dragonfly on its back and took it home.

All of a sudden, a cloud covered the moon and the poor firefly was alone and in the dark she was very afraid, heard a noise: the water of the pond moved and a suspicious croaking approached.

When he became aware of the danger, the firefly tried to escape but in the darkness of the forest the firefly could not orient itself but could not find a hiding place: it was so dark that it did not see a palm from its nose.

Suddenly, pushed by the wind, the clouds shifted and the moon shone again in the sky. In the moonlight, the firefly finally managed to escape the frog.

The moon saw that the firefly was safe and because it no longer ran into danger it gave him some of its light.

From that day on fireflies were no longer attacked by anyone. With their light they illuminated the night.

Fireflies are surrounded by beliefs and legends, which embellish the stories related to their tangible essence. In our country it was common to capture them and hide them under a glass during the night, a gesture that would have favored the arrival of money and fortune.

Their figure is also linked to the night and the world of dreams, but also to that of the dead. In ancient Japan, fireflies were thought to be the earthly incarnation of the dead, especially those who died in battle.

In Japan they also represent the fragility given by the reduced size and at the same time the purity of soul, the correctness and strength of the samurai warrior, while in the heraldic ambit they are synonymous with nobility.

In the United Kingdom, but particularly in the Victorian era, the entrance of a firefly into the home was an omen of misfortune. Like killing one that could endanger the couple’s relationship, with the departure of the sentimental counterpart.