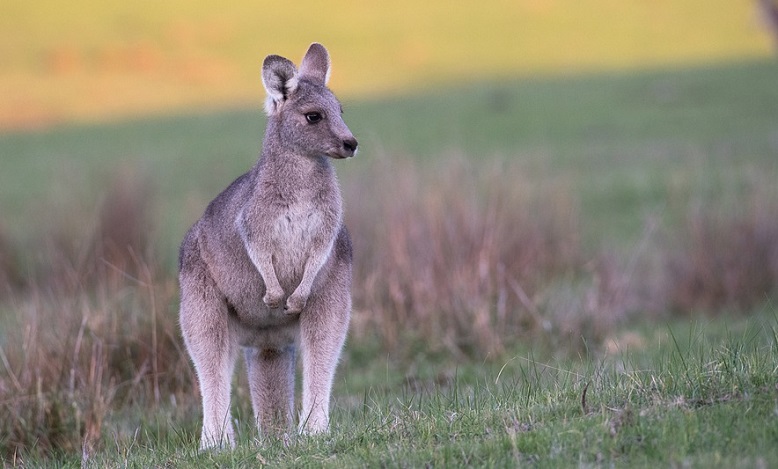 The kangaroo is a strange creature. It looks like a very large rabbit that stands. These creatures are only found in the island continent of Australia and, of course, in zoos around the world. Because of this, it would make sense that the symbolism for the animal comes mainly from Australian astrology.

The symbolism of this kangaroo comes mainly from the actions and appearance of the creature. But some Australian legends and myths also help contribute to this strange animal symbolism.

Many things and themes are now catapulting into your life almost at the same time and almost even jump on you.

The kangaroo confronts you without warning with new things to test your spontaneity and flexibility. If you do not already have these skills, the kangaroo power animal will help you now.

With the help of the kangaroo as a power animal, spiritual quantum leaps and significant material advances are possible. It is now time to confide in the progress and to indulge in the advancements. No one is able to stop the course of the river and whoever tries it drowns in the dammed up water or is forcefully carried away.

So do not try to defend yourself, but let the current drive you to other shores and into other rivers and bodies of water. If you indulge in the flow of life, nothing will happen to you. The big jumps of the kangaroo often lead to new and unknown areas, which at first seem eerie to you. But without overcoming obstacles and leaving the past behind, you can not make headway.

If you would like to explore the new terrain in peace, then go in the kangaroo bag and be in the shelter of the new kangaroo region show. While this will not stop the change and change of territory, you will gain time to get used to it.

As a creature originating from the dream time, the kangaroo is especially associated with the ancestors.

It jumps with you through the worlds and wants to encourage you to walk on your own dream path.

Thus, the kangaroo as a power animal also draws attention to finally tackling projects and realizing dreams and visions. The speed, spontaneity and jumpiness of the kangaroo power animal will be of great help to you.

Speaking of the topic jumpiness is another important topic on which the kangaroo wants to draw attention as a power animal. You may be too phlegmatic and unspontaneous, and you may need more leaps or exaggerate and jump from one event to the next, rushing ahead of your life and away from yourself.

Kangaroo wants to invite you as a power animal, to trust the changes in your life and to take big leaps. Some of these great jumps catapult you forward and take you into new, unfamiliar terrain.

Then it is time to trust life and give yourself the necessary space and time to study. Projects and visions that you have not dared to do yet can now be successfully implemented. I am ready when I have the opportunity to leap forward. Mother Earth is my companion.

Trust that you will always have what you need. Let the wealth and the good, the generous Mother Earth, be yours, not by greedily tearing at you, but by gratefully accepting and always appreciating it.

So everything can come to you what you have called into your life, whether consciously or unconsciously, does not matter.

The history of the Wallaby belongs to the “time of dreams” of the mythology of the peoples of Australia. The first ancestral kangaroo walked on its four legs, like almost all animals.

The Kangaroo was resting in the shade of a tree when his sensitive ears heard the hunter man sneaking up on him with a dangerous weapon against which he was completely helpless. The only thing the kangaroo could do was run as fast as possible.

The Kangaroo had observed that the man who threatened him had only two legs. He felt confident that his four legs would take him away from danger without difficulty.

He had underestimated his enemy. Man turned out to be very fast and strong. His two legs were longer than those of the Kangaroo, and he was strong muscles. So the kangaroo endured Man’s career for hours, but the poor kangaroo, no matter how hard he tried, was unable to increase the distance. He was saved by the sunset and the darkness that fell on the earth.

Exhausted by the effort, the Kangaroo dropped without forces to the ground. After a while he raised his head. A bright light appeared in the shadows. The Man had lit a fire to warm himself in the cold night.

With caution, the Kangaroo distanced itself a little, stood up and tiptoed away from the bonfire that revealed where the hunter was. To make no noise, he held himself on his hind legs and thus managed to escape.

After a while he realized that he was using two legs instead of four, just as the man had done during the long chase. It was a strange feeling. He experimented a lot and realized that he could cover more distances by jumping instead of walking or running.

Using his tail to balance himself, he discovered that he could jump farther, much farther than the man covered with his strides. It was a very stimulating experience and has continued to do so to this day.

Over time, by using less and less, they became shorter, while their front legs became stronger and so have remained to this day.

For the aborigines the kangaroo totem is a sacred and ancestral animal and they use it as a totem of power, potency and sexuality, but above all, it grants a lot of protection and help when great decisions are to be made or to launch ourselves with joy to new projects.

The term “kangaroo” comes from the language of the Aborigines (indigenous Australians) and probably means something like “bouncing long leg”.

The exact translation is not known. In addition, in the mythology of the aborinines, the kangaroo takes on a similarly central role as the lizard and the emu.

According to the legend of the Dreamtime, there should be a “big kangaroo” that should have made sure that the animal people stopped the water during the big flood.

After that, the “big kangaroo” should have uttered all the words that people speak all over the world.

So the kangaroo became the creator of all languages, dialects, sounds and sounds. In addition to the emu, the kangaroo is probably the most famous heraldic animal in Australia.

If you are dreaming of a kangaroo, you may be experiencing very sudden changes in your life that seem overwhelming. They probably do not come so soon after the things to realize and process how they happen.

The kangaroo is a strange creature. It looks like a very large rabbit that stands. These creatures are only found in the island continent of Australia and, of course, in zoos around the world. Because of this, it would make sense that the symbolism for the animal comes mainly from Australian astrology.

The symbolism of this kangaroo comes mainly from the actions and appearance of the creature. But some Australian legends and myths also help contribute to this strange animal symbolism.

The adult kangaroo is a hard animal. If it were a person, it could be a boxer or other professional athlete. These animals are anything but lazy and boring.

They seem to always be on the move, unless they are napping, of course. This quality of movement is one of the things that can help define the symbolism of this animal. There is no doubt that this creature has its training of the day.

The kangaroo is an incredibly strong and fast animal. You can easily jump faster than the average human can run. Due to the natural strength of this animal, it is an obvious symbol of strength. Due to its speed, it is also a great symbol of resistance.

It is the energetic life form of this animal that would tire most humans. This can also be a great motivator for humans.

It almost seems like a joke that a kangaroo can have more energy and endurance than a person, and this could very well help motivate a person to work harder so that he can be more like the powerful kangaroo.

The kangaroo spiritual guide has few or no natural predators due to its size and speed.

Therefore, this animal has little to fear anything. To say the least, the kangaroo would not back down in a fight, and it would not be unlikely that the animal would initiate one.

Of course, if the animal needed it, it could easily run, or in this case jump, away from a fight too. This helps reinforce the symbolism of speed and strength of the animal.

But it also adds a new symbol to the mix. The kangaroo animal spirit does a great job to symbolize the fight or flight instinct that humans have. It also shows the nature of life, death, adaptability, survival and quick thinking.