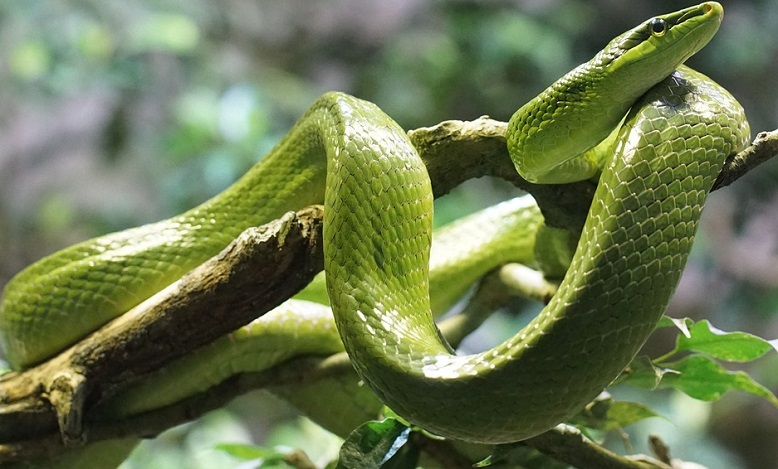 Animals as peculiar as snakes have touched, since the dawn of time, in the depths, the popular imagination.

Cold-blooded animals and cool to the touch; endowed with particular and rapid movement that makes them elusive, almost ghostly; the poisonousness of some species; the property of changing old skin coming out of “new life”, are all features that make us uncomfortable in their presence, they are not reassuring beings.

With these premises, fatally, (and sometimes continue to exist) countless medical – magical – religious beliefs about their positive or negative powers flourished on them.

In Greco-Roman mythology, the figure of the serpent appears with Asclepius (Aesculapius) associated with healing, symbol of medicine and wisdom.

On the other hand, in the myth of Laocoonus, priest of Apollo (god of Olympus), disobedience to the god causes him to send two great serpents in order to kill Laocoon. From this, the serpent represents the animal.

In fact, the great hero of the Greek mythology, Hercules, faced the Hydra monster, animal with dragon body and nine serpent heads.

In Nordic mythology, Jormungand is known as the serpent of Midgard, son of Loki, giant god of fire, cheating, magic, and Angurboda, goddess of fear. Odin, god of wisdom and war, abducts his three sons (Fenrir, Jormungard and Hel), so that he launches Jormungand into the ocean and has since taken on a figurative form in a giant serpent that envelops the whole world and also engulfs his own tail, as “Ouroborus”.

Perhaps this is the most figurative image for the symbolism of continuation, the renewal carried by the serpent, for the image of “Ouroborus” is that which swallows its own tail, forming a circle, representing the cosmos, the totality, and the cyclic energy.

In Hinduism, Buddhism and Yoga, the serpent represents the vital force, healing as well as the cosmic and sexual energy associated with the Kundalini (physical and spiritual energy concentrated at the base of the spine), the backbone being the representation of the serpent (energy) that reaches the head, bringing healing and cosmic balance.

In the same way, in shamanism, the serpent, animal that exchanges its skin is considered the devourer of diseases, and for that, symbolizes the cure, the sensuality and also the vitality and the wisdom.

For the Aztecs and Toltecs, Mesoamerican peoples, the image of Quetzálcoatl is represented by a serpent with feathers, in Spanish, “feathered serpent,” the most important deity, the element of water, life and renewal.

In addition, it represents energy and strength. People born under this Yin sign of the water and earth elements are mostly as the animal’s own symbolism suggests: wise, sensual, elegant, mysterious, and at the same time distrustful, insecure, cautious, cold and calculating.

Given the characteristic of the snake of giving birth to the young, it was believed that to accomplish this act of love, the belly was cut on thorns, to allow the snakes to come out. It was believed that the snakes mated through the mouth; unfortunately, the female, excited by the great pleasure and, perhaps unconsciously, while receiving the seed, cuts the head of the male, killing him. It must be said that this popular belief, totally groundless, was also shared by the ancient scholars, we remember, among others, Pliny the Elder and Saint Jerome.

For a long time, and not only in the insubric area, but at least in the whole of Europe, it was believed that snakes were gluttonous with a woman’s milk, so much so that they hid in the house and slipped in, when everyone slept, under the covers and finding a suckling baby gently moved it away from the maternal nipple, giving them its tail in its mouth, and in turn, sucking the milk.

The mouth of the serpent is not suitable for sucking, nevertheless, this belief had a multi-millennial life.

A version present in the Alpine area, told of cows that, on the alp, went to be sucked by the snakes, it was thought that the snake would climb, twisting, on the leg until, arrived at the height of the breast sucked, it seems without regret to cute bovine.

Snakes were also fond of goat’s milk. In some areas it was thought that the snake only became poisonous after having swallowed a toad. It was also believed that the snake in the water lost its poison.

The fly that landed on a dead snake became poisonous and dangerous to people. Keeping a piece of skin on the snake skin protected from the “bills”. Bringing up old skin brought luck to the game; the opponents shouted: “squaia, squaia, pèll da bissa” (melted, melted snake skin).

A snake that crossed the street in front of a person foretold the next death of a relative of this. Dreaming of snakes was a bad omen, but if you could kill them it meant that, in the end, you would triumph.

Other times, dreaming of snakes was a sign of a quarrel or the presence of envious people around us. The appearance of the black snake (rat snake) was an indication of rain and bad weather.

In this capacity for weather forecasting, snakes were linked to salamanders and snails.

According to popular belief the snakes were exceptionally long-lived (like the eagle), they could live more than a century. It was believed that the hunters shooting at a snake had to aim at the tail, so that the dots, after crossing the body, stopped at the head, killing the poor reptile.

Otherwise, penetrating from the head, they would have escaped from the queue without harming them.

A killed snake had to be hung by the head to a pointed stick fixed to the ground, so that the body dangled in the void, to prevent it from coming back to life.

Another tradition informs us that if you kill a snake by cutting it in two, without crushing its head, the body will die (but continuing to move until evening), but the head will continue to live becoming as big as that of a cat.

The snake, and all the snakes, are able to take the tail in its mouth and roll like a wheel. This belief, completely unfounded, quite popular in the past, was still reported to me about ten years ago by an elementary schoolboy, during a lesson on snakes.

A wounded or persecuted snake would have tried for seven years to bite the wounded or persecutor. In snakes the witches were sometimes changed to perform their evil spells. If encountering a snake we see it first, the reptile is unable to move, but if it is the snake that stares first, then it will cause drowsiness and dizziness.

They were looking for a dead snake, they would go home and pull away their skin; a part was cut off in proportion to the length of the wound and afterwards it “passed”, together with some rosemary leaves, onto the wound.

Old and abandoned skin (sometimes called a shirt) of a snake was applied to infected wounds and ulcerations. The mutated skin of a snake was placed under the pillow of a child suffering from a milky crust.

The same relic was introduced in a small bag to be brought into contact with the skin, or, sewn into a garment, especially infantile, to preserve from reptile bites, from the evils of body and soul, in particular the “invoices “. The old body was rolled up in hats to protect from headaches.

The abandoned skin, fried in oil with a little ash, was applied to the affected area to extract the deeply-splintered splinters. In obstetrics, with the old skin it was used to gird the belly of a woman giving birth: the fetus will slip out like a snake.

The serpent is a reptile that is often associated with evil, death and darkness, because it is considered a mysterious, treacherous and poisonous animal.

However, it is a very rich symbol in many cultures and, on the other hand, can represent rejuvenation, renewal, life, eternity and wisdom.

One of the best known scenes of the Bible is the moment when Eve bites the apple and renounces the paradise, under the influence of a serpent disguised as Satan.

From that moment, the serpent indicates, in Christianity, sin, a traitorous, calculating animal of the underworld associated with the devil. Seeing a serpent is mostly considered to be a negative sign in most cultures, and what attributes to this is probably the long negative history of this reptile.