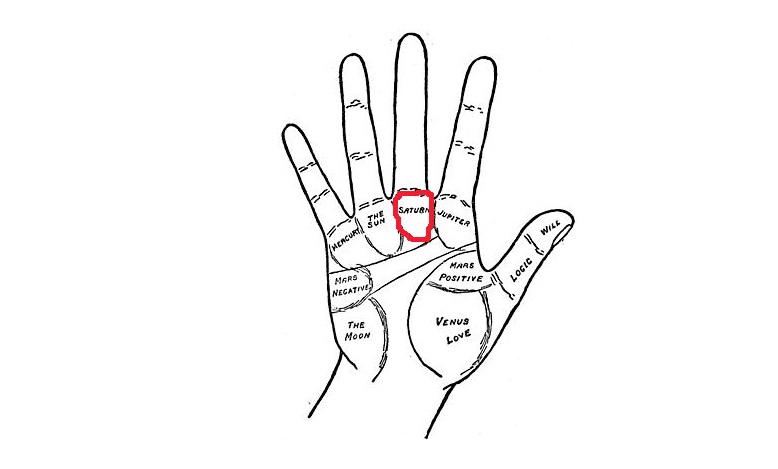 Since the oldest times people have believed that it is possible to discover their own destiny by looking in their palms. This belief may not be so strong today, but it is proved that our palms can tell us a lot about our own characteristics and personalities.

The practice called palmistry is based on reading the palm and interpreting its meaning.

In the article of today you are going to find out how to read the mount of Saturn on your palm.

Before we tell you what the most important meanings related to the mount of Saturn are, you need to know where this mount located is. Its place is direct beneath our middle fingers.

Now we are going to tell you what this place at the root of our middle fingers can represent and how we can read it.

What Does the Mount of Saturn Mean?

As we have already said, the mount of Saturn is actually a little bump of flesh that is located beneath your middle finger. This part of your palm is usually related to responsibility, truth, introspection and inner wisdom.

There are so many meanings related to the mount of Saturn and now you will see some of the most common of them.

Independence. If you have a normal mount of Saturn, which means that it is not too developed, but it is not underdeveloped as well, then you must be very independent in all areas of your life.

This part of your palm is usually associated with your independence, especially when it is normal.

Solitude. Another trait typical for people whose mount of Saturn has a normal form and size is that they like being alone. They are not very social and they feel best when they have enough time for themselves, without other people who could disturb them and their peace.

Of course, they have friends as well, but they decide when they will spend their time with others. For those people it is not a problem to spend hours and hours in solitude, because they usually have a lot of hobbies and they are never bored.

Responsibility. People with a normal mount of Saturn are usually very responsible and they don’t run away from their responsibilities. They have a high level of common sense as well and you can rely on him at any moment.

Knowledge. It is typical for people with a normal Saturn mount that they love getting new knowledge. They enjoy studying and learning new things and those people are usually very educated and high intelligent.

Suicide. It is believed that if your mount of Saturn is not well developed, it is a negative sign and it means that you may get into dangerous situations easily.

Sometimes an underdeveloped mount of Saturn may be related to suicide as well.

However, most important is to determine the type of the Saturn mount that you have, in order to understand what this mount can mean.

In the following chapter we will present you a couple of the characteristics that will help you determine what kind of a Saturn mount you have.

Different Types of the Mount of Saturn

If your mount of Saturn has a normal size and form, then it is a good sign. It probably means that you are an independent person and you are able to take care of your own.

However, you may be too stubborn sometimes and you don’t want to accept any help of other people.

All that you have to do, you are trying to do on your own. You like your independence and there is nothing that could make you fall under the influence of other people.

Also, if your mount of Saturn has a medium size and it is normal, it could mean that you have balance in your life, which especially refers to your emotions and control that you have over them.

We have already mentioned that people with a normal Saturn mount love spending time alone.

They always know how to spend their time and make fun for themselves.

However, those people may be too introverted sometimes and they usually have only a small circle of friends.

If your mount of Saturn is well developed, it could be a sign of knowledge and wisdom that you are seeking for. You enjoy learning new things and making your knowledge bigger.

You are always excited when you have the opportunity to learn something new that will be useful for you in the future.

It is also believed that people with a well developed mount of Saturn are wise and their wisdom helps them solve many problems in their lives.

If the mount of Saturn is very strong, then those people may be very rigid and conservative sometimes and they don’t accept the opinion different from their own.

We have also to mention what it means when the mount of Saturn is smaller than normal. It means that this person is not responsible and he/she is usually disorganized.

A small mount of Saturn that is not well developed is always related to something negative and often with something dangerous.

It is also important to take into account the color of your mount of Saturn. If it is yellow or very pale, it is also a negative sign and it could be related to suicides.

If there is a vertical line on your mount of Saturn, it is a good sign and it means that you are a calm person and you are going peacefully through any situations in your life.

A vertical line on the Saturn mount also means that you will have a long and happy life.

However, if there are two vertical parallel lines on the mount of Saturn, it is a sign that this person will be successful in the middle age.

If there are a couple of lines in the form of a ladder on your mount of Saturn, it probably means that you will be respected by other people, but it will take some time. You need to be patient before you get public recognition.

It is also possible to notice a circle on your mount of Saturn and you should know that it is associated with your spirituality.

The circle on the mount of Saturn means that you will have great progress in your spiritual growth and you will dedicate some time to meditation.

If there is a star on your mount of Saturn, then it is a good omen and you don’t have to worry.

However, if you notice a cross on the mount of Saturn, it is a bad sign and it probably means that you will not have children.

At least, you will have the problems to conceive and you may also have some kind of an accident in the future. If there are a couple of scattered lines on your Saturn mount, it is also a very bad omen and it means that bad luck will follow you.

You have seen some of the most common lines and marks that can appear on your mount of Saturn, as well as different types of this mount. Now you can determine what type of the Saturn mount you have and you can see your own traits, as well as what is expecting you in the future.

However, these are only theories and beliefs and it is up to you if you will believe it or not. We hope that we have explained you thoroughly all possible meanings of the mount of Saturn and from now on it will not be problem for you to read it.