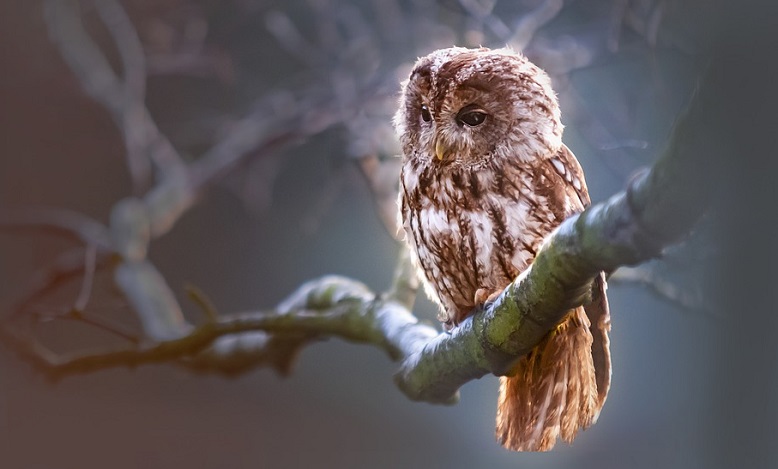 Symbolism linked to the owl suggests that, we can say that its image is contradictory. Testimonies on the owl in the mythological, literary, folkloristic and linguistic fields, in fact demonstrate the passage from the sacredness to the superstitious fantasies of this extraordinary inhabitant of the night.

For some traditions the owl is a bird of ill omen: the Egyptians for example associated it with death and the afterlife. Thanks to Homer, however, the owl is redeemed by its sinister fame.

This bird was already present in the myths of the ancient Greeks, in fact it accompanied the Greek goddess Athena (who later corresponded to the Roman goddess Minerva) symbol of philosophy and wisdom, of rational intelligence that “sees” where others only see shadows and darkness.

We are talking about the “Civetta di Minerva”, considered sacred to the goddess Athena because she is able to see in the dark, to whom the goddess entrusts the supervision of night tasks. From here derives the name of the genus to which the bird of prey belongs, namely Athena.

From the earliest depictions of Athena, the goddess is painted with an owl perched on her head. In archaic times Athena may have been in fact a bird-goddess similar to Lilith or to the goddess with wings and owl claws depicted on the Burney Relief, a relief from the Mesopotamian terracotta period of the early millennium II a.C.

In fact Omero often defines the goddess of wisdom as goddess “with the face of an owl”.

In ancient Greece there was a proverb that referred to abundance and wealth that said “Bringing owls to Athens”. Because of this symbolic meaning, the owl was depicted on the Athenian coins and its name became synonymous with money.

From the end of the 6th century BC the head of Athena appears in the coins of Athens on the recto and on the other side an owl with an olive branch and the first three letters of the name of the city.

In Roman mythology, Nittimene, daughter of the king of Lesbos, was loved by her father and to avoid incest flees into the woods where, out of pity, she is transformed into an owl by Minerva herself.

In the Panchatantra, instead, the most famous collection of Indian fairy tales and probably also the oldest, tells of a war between the owl and the crow for which the owl kills crows at night while they sleep. The war begins because of the crow that opposes the election of the owl as king of the birds, declaring it the smartest among the birds.

This story is repeated several times both in the Byzantine and in the European tradition, where the roles are also reversed: it is the crow that is about to be proclaimed king and the owl that instead opposes it.

We already find the fame of the bird of ill omen in some writers of ancient Rome, even earlier than in European folklore. Eliano, for example, in his De natura animalium describes the owls as beings similar to women dedicated to witchcraft and spells, who thanks to their skillful transformism are able to attract other birds to themselves.

According to Eliano the owl could change the appearance of the face even in those of the chosen prey, giving way to those connections that will make of the owl a female enchantress and of the coquetry a malicious art.

The clairvoyance of the owl that can see in the dark and the peculiar habits of this shy, solitary, nocturnal animal that often lives in cemeteries, have led to many different superstitions against this animal, also considered demonic according to popular cultures. 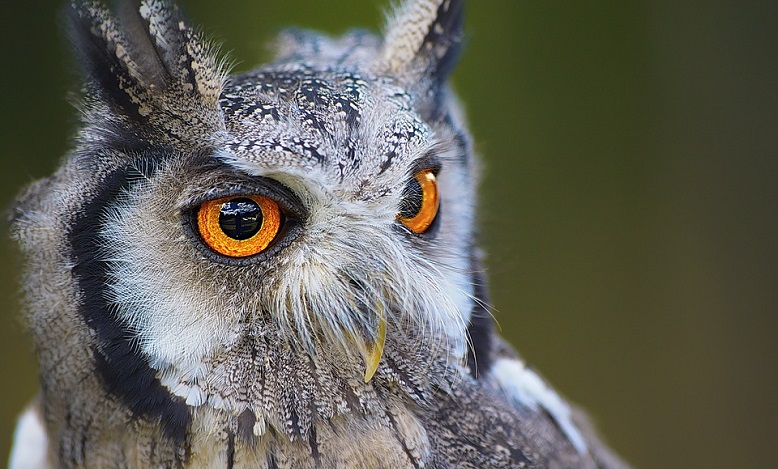 In Christian symbolism, for example, the owl sees in the darkest night because it has in its eyes a luminous force that dissolves the darkness and according to a belief of southern France and Spain these birds of prey feed their light source with the oil of votive lamps, for this reason they are called “suckers”.

The Celts nicknamed the owl “bird corpse”, reincarnation of the witch who peers at night while in India it is the emblem of the god Yama, and lord of the dead whose soul he judges. In Argentina it is said that a healer saw the diseases and consequently treated them, peering into the eyes of her embalmed flirt.

A further testimony of this clairvoyance are the coat of arms of Great Britain: the effigy of a golden owl in a green field represents the wise man who sees things beyond appearances.

In South America, if you spot an owl, you must make spells and leave immediately by saying the formula “I believe in God and not in Vos” to avoid the curse and reject the demon that has the appearance of this animal.

In pre-Columbian society in Paraguay, for example, whenever an owl was heard, the Araucans gave themselves a run in an attempt to drive out demons. In the same way the Indians, on hearing their sound, insulted the poor birds to chase away the evil they carried with them.

The Jews represent and identify the female demon Lilith with the owl to highlight the nocturnal nature of the goddess, deception, malice, sexuality and darkness. This symbolism derives from the even more ancient image of the goddess Lilith (Adam’s first wife) of the Mesopotamian period (3,000 BC): this demonic goddess is represented together with two owls and two leonied is associated with storm, disgrace, illness and death.

For the same reasons, in Europe, in Asia and in Africa the owl is associated with witchcraft: witches apparently had the ability to transform themselves into owls to wander undisturbed at night in search of poisonous herbs, or to spy on people or hunt animals (especially mice, toads and bats) that would have served them to make potions.

It is said that some parts of the body of the owls, such as feathers, heart, legs, bones and eyes, were used by witches as powerful amulets and talismans. In some popular legends of Germany and Scandinavia, the owl is considered the spirit of the woods and even today there is the custom of nailing the owls that have been killed on the doors of houses and farms.

Owl Symbolism in the Bible

In medieval times the negative symbolism of the owl assumed political connotations when under the papal rule it represented the Jewish people guilty of having rejected Jesus Christ. The bestiary Physiologus Latinus points out: “The owl represents the Jewish people who rejected our Lord and Savior when he came to save them.”

In places and periods in which anti-Semitism was strongest, Jews were accused of abducting Christian children to burn them alive in rituals related to the veneration of the demonic deity called Moloch. As seen, Moloch was the ancient Egyptian name of the owl, later associated with the cruelty of paganism. In particular the sacrifices in function of Moloch were accomplished by fire, and they are also called holocausts.

“Christianity persevered in the association between owl and evil spirits, to the point of reducing it to one of Satan’s symbols. On a stained glass window in the cathedral of Saint-Etienne, in Bourges, the devil is revealed to Adam and Eve in the form of an owl from human head, perched on the Tree of knowledge. ”

That this characteristic of God and his relationship with man, that is, concealment, is essential in Scripture, we also see it in another image, also particularly effective, this time taken from the New Testament, from the Gospel of Mark, to chapter 4.26 ff., where there is talk of that Kingdom of God which we have just evoked through the title. Jesus uses, to explain to his parents the mysterious reality of the Kingdom of God, a beautiful and effective image, that of a man who sows the seed in the earth.

The seed penetrates the darkness of the earth, where things happen that the farmer does not know how they actually happen. The unfolding of the vital dynamism of the seed happens regardless of the farmer (who sleeps or who watches the seed sprouts and grows).

Owl as a symbol of Illuminati

A post on the Illuminati that we published some time ago stated that Minerva is one of the gods included in the pantheon of ‘Enlightenment’ Masonic doctrine. In the original Illuminati hierarchy, composed of only three degrees, the second degree was called Minerval Degree.

“The term derived from Minerva, ancient Roman goddess of wisdom, trade, war, craftsmanship, magic, and music. Minerva is often depicted in the company of her sacred creature, the owl, which symbolizes wisdom by way of his ability to see in the dark. The representations of Minerva are frequent in important places and coats of arms, such as the Library of Congress and the Great Seal of California. ”

No doubt this aspect of enlightened Masonic symbolism will be truthful and relevant. However the iconography of the ‘illuminati’ seems to refer mainly to owls, and almost never to owls. For example, we observe the animals engraved on the original seals of the illuminati:

Those depicted are not the sacred animals of Minerva, symbols of wisdom, emblems of philosophy and the soul (Ba) according to the Egyptian mysteries and the Jewish cabala. They are owls, effigies of Moloch, animals of Astarte (Ishtar), Goddess of nature and matter.

The Owl and the Vigilantes

And again, we know that Masonic mythology associates the owl (not the owl) with the Guardians, Watchers or Watchers, “alien” visitors from which at the dawn of time human civilization and Masonic doctrine would begin. The following passage is taken from the book Mysteries and Secrets of the Masons: The Story behind the Masonic Order, by Lionel and Patricia Fanthorpe:

“Another aspect of the symbolism of the owl in Freemasonry is linked to the strange theories on the ancient roots of Freemasonry, the idea that secret flying beings from distant worlds would have founded Freemasonry after an evocation occurred in a remote era.”

The Owl in Modern Symbolism

In the upper corner of the US dollar bill, as we know very rich in occult symbolism, we find a microscopic owl. Not something else, but an owl.

According to various sources it would be a Masonic reference to the minerval wisdom, however it is certain that the image on the banknote portrays an owl and not an owl; although just mentioned, the small horns are unmistakable.