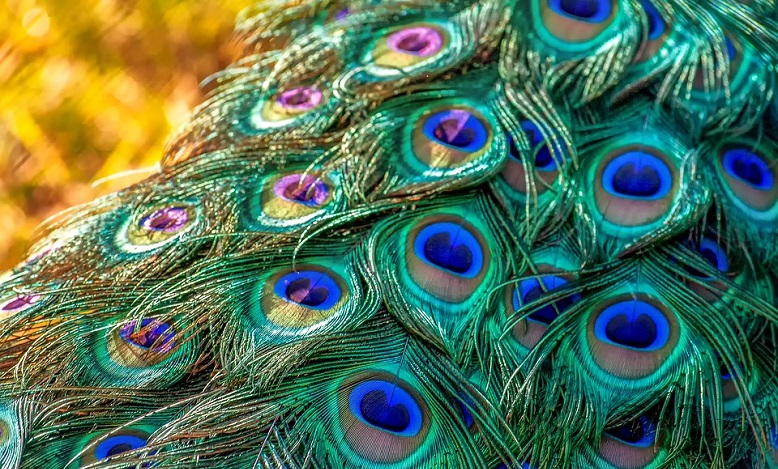 Everything in different cultures has a meaning and particular symbolic dimensions. The emblematic aspect of an object, gesture or animal, is something very deep and elevated, because it is able to recall further logical junctions, meanings and etymologies.

The symbol, since prehistoric times, has an incredibly strong connection with the profound meaning of our lives.

One of the most beautiful animals is certainly the peacock, whose existence is able to express deep meanings handed down in every culture. A Sufi legend states that God created the spirit and gave it the shape of a peacock. It was overwhelmed by a great fear and, from the sweat produced by his concern, all other living beings were born.

The element that refers to the power and harmony of the Spirit is the tail, which when opened is equivalent to the cosmic deployment of the Spirit.

The peacock was seized with a reverential fear and dropped drops of sweat from which all the other beings were created. The opening of the peacock’s tail is the symbol of the cosmic unfolding of the Spirit.

There is a similar relationship between the rotary dance of the dervishes and the magnificent peacock wheel.

The peacock is known as the bird with a hundred eyes. The eyes, in its plumage, represent the stars, the universe, the sun, the moon, and the “celestial vault”. At one time these wonderful animals sacrificed themselves to make people and the land fertile. The Chinese believed that a peacock’s gaze could fertilize a woman.

According to Hindu beliefs Saraswati, the goddess of knowledge and wisdom, rides a peacock and when the god Indra the lord of heaven turns into an animal, he becomes the peacock, ridden by Saraswati.

PavoneBianco6In the ancient Greece Il Pavone, was called the “Face of Era”, it represented the celestial splendor as epiphany of the Great Goddess, given the colorful ocelli of its wheel, similar to many stars. The homonymous constellation was wanted by the same Goddess, in memory of her faithful guardian of the hundred eyes, Argo, killed by Hermes. The Romans called it “Uccello di Giunone” and accompanied the souls of the empresses in the afterlife, since, already in the Persian tradition, it symbolized royalty, beauty and immortality.

In the Western spiritual dimension the peacock alludes to the totality because it brings together all the colors of the iris in the fan of its unfolded tail, which also indicates the cosmic unfolding of the spirit. This bird recalls the substantial identity of all the manifestations, but at the same time their fragility, since they appear and disappear as quickly as the peacock shows the wheel and closes it, and in the changing colors of its plumage.

In medieval times, the peacock takes on different meanings, a symbolism deriving from its beauty, Glory, Incorruptibility, Resurrection and Immortality, in some cases even Justice.

These meanings are already present in the classical era, the peacock had to evoke the monster with a hundred eyes, Argo, put by Era to guard the beautiful Io loved by Zeus, so that the god would not lie with her. Mercury then killed Argo, and Hera brought his eyes back to the peacock’s tail, which became his sacred animal: Virgil (Aen. VII, 791) called Argo “guardian of the virgin”.

According to beliefs already told by Pliny the Elder, the flesh of the peacock was incorruptible and every year it was reborn with new shining feathers.

Saint Augustine (The City of God, XXI, 4) bears witness to the prodigy of peacock meat, in his view wanted by Heaven: in Carthage he was served a roast peacock (classic dish of ancient Rome), and asked that a part of the chest was preserved, to verify the effect of time on it.

After many days, while other meats would have had a bad smell, the peacock was still perfect, and so still a year later.

According to Christian principles the peacock is the symbol of the perfect, just and holy man, who is not corrupted by any vice since, according to the opinion of the ancients, the flesh of the peacock is incorruptible (Sant’Agostino Gloss. C II Reg. ).

The bond between peacock and angel is taken up in the Trattatello in laude by Dante di Boccaccio (1350ca.) “The person between his other properties for what appears, has four notables. The first is that he has an angelic pen, and in that he has a hundred eyes; the second is that he has filthy feet and tacit gait; the third is that he has a very horrible voice to hear; the fourth and last is that his flesh is odoriferous and incorruptible ».

The author continues by comparing the Divine Comedy to the peacock, for certain of its symbolic characteristics, then reasons that, since the angels fly (even if they admit to never having seen an angel), they must have feathers, and, since no other pen is as beautiful as that of the peacock, it is the true “angelic pen”.

The negative symbolic aspects of the peacock (for Boccaccio “the voice of the peacock is resonant and horrible” and in the Bestiari it was a bearer of vanity and alluded to concupiscence) they retreat before the further Christological meaning, for which the peacock remembers the Holy Spirit and the Resurrection, since in autumn the bird loses its magnificent aftermath which then grows with the first warmth, recalling the joyous theme of rebirth.

We will find the theme of the “angelic pen” in the painting of the entire fifteenth century, not only in the Italian one, where we can find the angels of the Annunciation by Fra Angelico (Museo San Marco, Florence) or those of the Bernardino da Siena of Mantegna (Pinacoteca Brera, Milan) or again in the Annunciation by Filippo Lippi (National Gallery of Art, Washington), but also in foreign painting.

The theme of its material incorruptibility and its beauty leads the peacock to be often used in Renaissance times, the rediscovery of the classics as well as the strong religious symbolism make it one of the most present animals not only in the works of the artists of the ‘400 but also in the civil and military celebrations of the period.

The flesh with its symbolism associated with the figure of Juno, divinity of marriage and childbirth and protector of the sacred peacock, was often used in the most important banquets.

During the Marriage of Costanzo Sforza with Camilla d’Aragona (1475), Iride (symbol of marriage and wealth that this door) is represented by a lady with: “.. at the foot had a word of borzeghini of gold feathers and Of peacock, a great peacock, with a collar of joys and a golden comet in his chest, went by sign, and in one foot he had a mass of gold, and in the other a silver one.

For the marriage between Gian Galeazzo Maria Sforza and Isabella of Aragon in February 1489, during the banquet the attendants dressed in classic clothes bring the food to the table of the guests and here we find Iride: “Iris was then offering a peacock taken from the cart of Juno, and remembered the fate of Argos “.

We find the same modus operandi in many other more or less known wedding banquets, the matrim Hon. by the Duke of Urbino Federico da Montefeltro and Battista Sforza or in the wedding banquet between Ercole d’Este, Duke of Ferrara and Eleanor of Aragon, daughter of Ferdinand of Aragon, King of Naples (Fabrizio Frizzi – Memory for the History of Ferrara )

The strong connection between the strong symbolism of the peacock and the classicism so fashionable in the courts of the Italian fifteenth century is again present.

The feathers that could represent the eye and the divine judgment, the incorruptibility of the man in front of the material vices, were often used to decorate the crests of the men of arms that, in the classic imagination, had to represent samples of values ​​and honesty. Later the peacock feathers or the animal itself will be increasingly present in the coats of arms of the various European families.

Throughout the fifteenth century the study of the great classics was widespread in the Italian courts, this study was part of the instruction of the future principles that learned the history of condottieri and not only.

Cristoforo de Preda 1477 – particular helmet Galeazzo SforzaWith regard to the use of peacock feathers in the helmets, reference is again made to the classicism of Aesop and his Fable: The Peacock and the Soldier.

A soldier had adorned his Elf of Cappone feathers (in some translations we find Ostrich). Which, seeing him, a peacock said, “I have many more beautiful feathers” and he turned to show them, “The soldier took the peacock, and put his feathers in his helmet, the peacock then deprived of his feathers, it was painful that he himself was been the cause of his illness.

This novel was part of the teachings that in the European courts were given to future principles with the aim of teaching that “to show precious things encourages others to kidnap them”.

In 1447, during the siege of Piacenza, Francesco Sforza identified the bravest men-at-arms intent on climbing the walls from their peacock feathers on the crests. (History of Milan – Bernardino Corio)

In Florence in 1460 for a carousel there were not enough peacock feathers for all the jousters and for this there is a commission to a painter for “the pictura de fogli to make peacock feathers”. (NERIDA NEWBIGIN, Feste d’Oltrarno. Plays in Churches in Fifteenth-Century Florence)

In the work of Paolo Uccello the famous “Battle of San Romano”, in the panel preserved at the Uffizi museum in Florence and representing the unseatment of Bernardino della Ciarda, we find among the many a knight with Cimiero with Peacock feathers.

During the event TORNEO IN ARMATURA our association has recreated the ceremonies that preceded a tournament, attentive to the symbolism of the period we decided to adorn the table dedicated to the reception banquet with two Faentina ceramic vases filled with peacock feathers, as well as d ‘use at the time used not only as a decoration but also as a wish for good luck to all present.

The peacock, thanks to its colors, symbolizes spring, birth, love and longevity. Its presence is a good omen and, thanks to the beauty of its feathers, it is also an icon of vanity and pride.

In the Muslim symbolism the peacock wheel expresses the extension of the universe. But this animal is also known as the bird with a hundred eyes (those “drawn” on its tail) that represent the stars, the moon, the sun and the whole sky.

The Chinese believed that the peacock’s gaze was so powerful that it could fertilize a woman, while some Hindu beliefs approach this animal to the goddess of knowledge and wisdom, but above all to the Lord of heaven, who turned into an animal, took the form of a young peacock.

In ancient Greece it represented the heavenly vault, as well as the epiphany of Hera. The Romans used to call it “Uccello di Giunone”, deputy to accompany the souls of empresses in the afterlife. In the West the peacock embodies the totality of things, since it is able to enclose all the colors of the iris.

This volatile alludes to the identity of all manifestations and their fragility, given that they appear and disappear quickly, just like its tail.

The peacock also symbolizes the positive transformation of any story (they feed on poisonous snakes, without being affected by their poison). For Christianity it is a symbol of death, resurrection and eternal life, and expresses royalty, glory and immortality.

The white peacock represents the Holy Spirit, as well as the light emanating from the conscience of the fearful people.