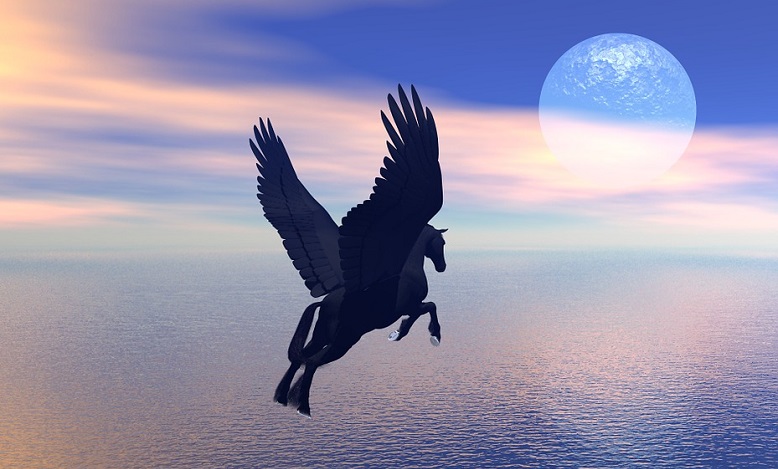 In the human imagination, the horse evokes freedom and beauty but it was not always so.

Over the centuries, the symbolism correlated to the horse has been affected by the different historical moments and by the dominant cultural thought, so much so as to give it a double aspect that emphasized, at the same time, the positive and negative characteristics of the animal.

Poseidon, god of the sea and water, was also the protector of horses and as such venerated by the Greeks.

According to legend, the winged horse was born from the blood spilled when the terrible Medusa was killed. The Greek poet Esiodo links the name Pegasus with the Greek word “pege”, which means “spring or well”, since the winged horse left its hooves on the ground and thus gave the idea that it would burst something.

On Mount Helicon, which Greek mythology describes as the home of the nine Muses, the patrons of all art and science, there was a sacred fountain called Hippocrates, which means “the source of the horse”.

The mythical winged horse was used by Zeus, the father of the gods, to transport lightning over Olympus, his divine home. In a later story, Bellerophon, another Greek hero, stole Pegasus with the help of the goddess Athena, who gave him a golden bridle. Thanks to this object, the young hero managed to tame the flying horse.

Riding Pegasus, Bellerophon accomplished an impossible mission: to defeat Chimera, a terrifying monster who gave his name to all that is unreal. Pegasus then took a companion, called Euippe (or Ocyrrhoe) and had two sons, Celeris and Melanippe.

This family represents the sotic mythological origin of all the winged horses. Celeris was also associated with the constellation of Equuleus, which means “small horse”.

The name Pegasus describes various minor mythological characters, all deformed versions of the Greek Pegasus. In Latin literature, Pliny describes the birds of Ethiopia with horse heads like Pegasus. Pliny also described a horse with wings and a horn of the same name (see unicorn, an animal that is sometimes presented with wings).

For other writers, including Pomponio Mela, he was a bird with horse ears. In general, each figure, whether mythological or heraldic, corresponding to a winged horse is called Pegasus. The idea of ​​the winged horse is very ancient and comes from Asia Minor.

A kind of winged horse called thestral, it also appears in the Harry Potter series. The thestrals pull the carriage that transports the students to Hogwarts. They have large wings, a skeletal body and are magical horses that are invisible to most school pupils.

Pegasus is a beloved figure who also gave his name to a constellation in the sky, is also a heraldic figure, a manga character, an Aprilia motorcycle model, a kind of rocket and even an airplane, the X-47 Pegasus used from the United States Air Force. Artists throughout history have always depicted it in flight or in a flying attitude.

It was also chosen as a stamp image for Greece and as a logo for various companies and businesses, including the well-known winged horse of Mobil.

It is also a much loved tattoo: on Pegasus skin, it can have bird wings or butterfly wings, but its meaning remains the same: it is a symbol of freedom and also of assistance, in completing the most difficult challenges, impossible missions in fact.

Known as pterippi (pteros in Greek means “winged” and hippopotamus means “horse of water”). The symbolic meaning of the horse is rather intense, with themes of power and mobility. The horse alone also brings archetypal themes of unified foundational stability (four feet on the ground) with higher ideals (speed and mobility).

This animal embodies the concept of exploiting magic on the material plane. Exactly, it alters physical matter with non-physical methods. These types of businesses are realized by absorbing the whole reality of our physical presence, balancing it with our (mainly) non-physical nature-essence.

It is difficult to grasp these implications, Pegasus offers a great analogy because of the dichotomy it possesses. Founded by the stability of his body, yet fleeing from the ephemeral power of his wings.

High and low (mind and body). Pegasus (white in color) represents the clarity of the mind, and how much the clarity of mental concentration combined with the stable foot can transform our lives into magical ways.

Pegasus is a figure from Greek mythology and is the most famous of the winged horses. Pegasus is born from the spilled blood of the horrible Medusa.

The Greek poet Esiodo connects the name Pegasus with the Greek term “pege”, which means “spring, well”, since the flying horse beats the hoof on the ground and inspires the idea of ​​making something come out of it.

On Mount Elicone, where according to the Greek myth the nine patron saints of every art and science lived, there was a sacred fountain called Hippocrene, which means “source of the horse”.

The mythical winged horse is used by Zeus, the father of the gods, to transport the lightning bolts up to Olympus, his divine abode.

In a later story another Greek hero, whose name is Bellerofonte, steals Pegaso with the help of the goddess Athena, who gave him a golden bridle by which the young man manages to tame the horse that flies.

Riding Pegasus, Bellerophon accomplishes the impossible mission: he defeats the Chimera, a frightening monster from which all that is unreal takes its name (the chimera, in fact).

Later Pegaso will take a companion, named Euippe (or Ocyrrhoe) and will have two children, Celeris and Melanippe. This family is at the origin of all winged horses.

Celeris is also associated with the constellation Equuleus, which means small horse.

Under the name of Pegasus are included numerous minor mythological figures, all deformations of the Greek Pegasus. In Latin literature, Pliny describes as Pegasus of the birds of Ethiopia with horse heads. Always Pliny describes under the same name a horse with wings and horns.

For other authors, including Pompano Mela, it would instead be a bird with horse ears. In general, each figure, mythological or heraldic, corresponding to a winged horse is called Pegasus. The idea of ​​a winged horse is very ancient and comes from Asia Minor.

Another species of winged horse called therstral also appears in the Harry Potter saga. The Therstrals pull the carriages that transport the student magicians to Hogwarths; these creatures have a skeletal body, large membranous wings and are magical horses, invisible to most pupils.

A beloved figure, Pegasus has flown through centuries and millennia, gradually giving his name to a constellation, a heraldic figure, a manga character, an Aprilia motorcycle, a type of rocket and even an airplane model, the X-47 Pegasus supplied in the US military aviation. Artists of all times have portrayed him in paintings and statues, always fatally in flight.

Greece dedicated a stamp to him and Pegasus was chosen as a logo by various companies and companies; the most famous of all is the winged horse of Mobilgas.

Very popular also as a tattoo, Pegasus can have bird wings or butterfly wings on the skin, but its meaning remains inviolate and intact: it is a symbol of freedom and also of help, in solving the most difficult enterprises. The “impossible missions”, in fact.

In many works of art, including modern ones, Poseidon is depicted guiding carts drawn by seahorses, that is to say animals in part horses and in fish parts. Many fables of antiquity tell of the deeds of winged horses.

The best known is certainly Pegasus, born from the neck of Medusa, to whom Perseus had cut off his head. Bellerophon domesticated this animal by making use of the bridles received as a gift from Athena.

Thanks to Pegaso, Bellorofonte succeeded in winning Chimera. The myth tells that with a blow of hoof Pegasus brought out the Hippocrates spring from Elicona, the mountain of the Muses. Zeus, angry at Bellerophon, sent an insect, which punished Pegasus by dropping his rider into the void.

Pegasus then returned to the sky, becoming a constellation. In symbolism, the winged horse combines the vitality and energy of the animal with the ability to break free from the earth and material reality.

A symbol that is not always positive is the centaur, the mythical being with the body of a horse and human bust, perhaps derived from the primitive terror that the invasions of foreigners who used horses as a means of movement and looting caused among the populations.