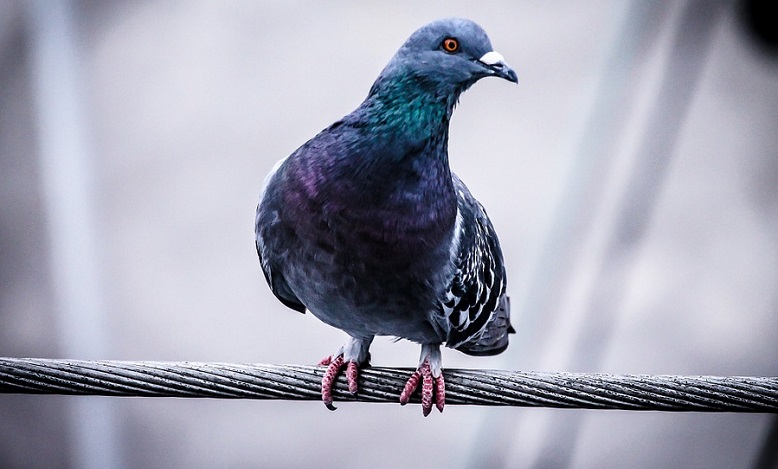 The relationship we have with pigeons is the result of the evolution of what has been built over time, starting from the farthest past, through the historical phases and the symbolism that involved these animals.

Their use as agents of message bearers, never interrupted over time, has been exploited above all in relation to the needs of war; but during the Napoleonic period, even the London financier Nathan Rotschild, damaged in his vast naval blockade operations and communications delays, decided to use pigeons to obtain timely and useful news from all over Europe.

The fame of the fabulous earnings made by the Rothschild with this system, incited other businessmen to use them and in 1840 the German journalist Reuter, founder of the homonymous information agency and precursor of all the modern news agencies, organized a regular postal service with pigeons, replacing the interrupted telegraph line between Germany, France and Belgium.

Maria Stuarda, queen of Scotland, who lived in 1500, during her imprisonment which lasted about 20 years and ended with her beheading at the behest of Queen Elizabeth of England, asked to be able to raise them in a cage to pass the time, certainly without paying attention to the their species characteristics; in this way he anticipated the modern law that allows keeping small animals in prison. These birds were not saved even from the role of sacrificial victims.

In fact, the Law of Moses provided for their sacrifice as a form of atonement on the part of the poor, who could not afford a sheep or a lamb, in a humble alternative could offer God a pair of turtledoves or pigeons.

It is perhaps useless to pause for some reflection on this fact that we always take for granted because of so-called animal sacrifices we have heard from the school desks as customary to accept uncritically, without bothering to consider its cruelty.

He does it well with his prose imbued with poetry Jose ‘Saramago, Nobel Prize for Literature in 1998 which, in his beautiful book “The Gospel According to Jesus Christ”, tells of the birds that are brought in pairs to the temple to be offered in sacrifice after the birth of Jesus to restore the purity of Mary; of them he says: “Not they know what awaits them, even if the smell of burnt feathers and flesh spreading in the air should not deceive anyone.

Giuseppe brings them huddled up in the palm of his worker’s hands and they, deluded, only for satisfaction give him some little beak to his curved fingers like a cage, as if to tell the new master “Thank goodness you bought us, we want to be with you “But Joseph’s skin is too hard to warn and decipher their loving Morse alphabet … they will die to recognize and confirm Mary’s purification.

A time-honored spirit, ironic and irreverent, one would not miss the opportunity to observe that it seems to be the condition to maintain purity in the world the fact that there are innocent animals “. Following is the horrible description of the place devoid of pity, all a shouting, a shouting of men and animals, flowing blood, moans, cutlery, hatchets, saws.

And Saramago adds: “Any soul that should not even be holy, a normal soul will find it difficult to understand how God can feel happy in the midst of such carnage, being, as he claims to be, the father of men and beasts. But no one pays attention to what happens, because that of the birds is only a small death”.

Therefore, innocent victims who are sacrificed to wash the guilt’s of the guilty, a condition that seems a constant in history, unworthy even of decoding, because everyone seems to agree on this solution, in which, to pay the penalty for sins not committed, they are speechless beings.

And in my opinion it is not legitimate to feel reassured because today no more sacrificial victims are brought to the temple, the animal victims of all kinds remain such, killed in the endless slaughterhouses of all the countries, which, in the vicinity of every commanded party, amplify beyond measure their work.

In the everyday life of big city life the dove is little welcome and has become a plague. For example, a real war broke out in the cities against the symbol of peace in the dove. In protected nets to the “rats of the skies” stretched nets of listed buildings many of these birds pass painfully. In this way, the dove could also be seen as a symbol of what happens when people are thoughtless about nature and how their aversion to domesticate animals and their own habitat can take their revenge.

The pigeon was once gladly seen and ultimately followed only her breeder human in the cities. Pigeons are still popular as messengers – as carrier pigeons or as white doves at weddings. Even as a power animal, the dove is a (love) messenger and brings a medicine that combines toughness and gentleness. 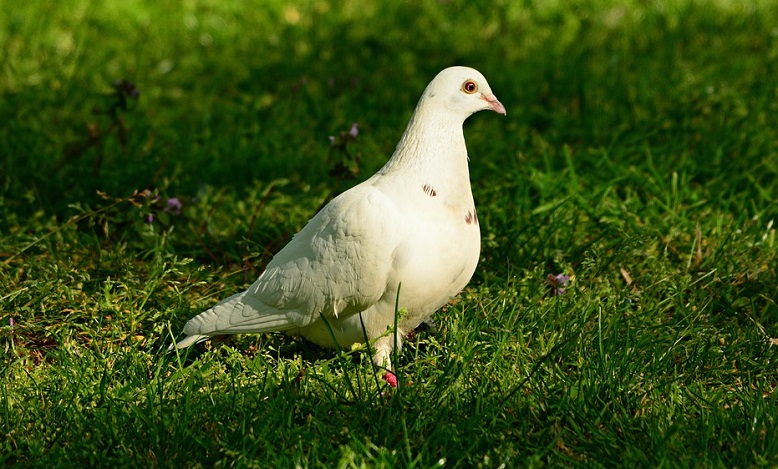 An animal spirit is a messenger from the Otherworld and as a power animal brings along its own medicine. Your power animal can become your soul guide if it finds you and you open yourself to it. It helps you to recognize and use your weaknesses and strengths.

Maybe it stays with you for a lifetime, maybe it comes to you as a helper animal in a certain life situation. People with the animal spirit pigeon are very resilient. They always find their way. At the same time, pigeons are particularly sensitive and sensitive and can handle conflicts with difficulty.

You can especially appreciate the medicine of the dove, if you to resolve a conflict through understanding the other side and a fruitful dialogue. To bring harmony and agreement into your family life. Orientation is needed to distinguish what is good for you and what is wrong for you or if you want to give this orientation to someone else.

The dove brings hope into your life. If you are currently in a conflict situation, it will give you understanding for the “other side”, so that you can negotiate better and find a solution. The dove is about bringing peace and love into the world and acting as a role model for others.

With the dove by your side you help others to orient themselves better. But do not be afraid of this responsibility: The dove will also help you to find your way around and to differentiate right and wrong. In addition, your wisdom will lay like a protective cover around your very vulnerable soul at the moment.

If the pigeon turns upside down, it wants to warn you not to go too much on a confrontational course. Maybe you are currently carrying too many unnecessary fights. Investigate once in your life, what is really important to you and what it is worth fighting for and where you are stuck on one thing only on principle, maybe just to give you no nakedness or give in to you. Let the dove show you how nice it can be to just let one thing go and be happy with others, to have achieved your goal.

We know that pigeons were domesticated a few thousand years ago; they were raised as courtyard animals since ancient times; breeding was widespread in Greece at the time of Homer (1000 years BC), seen in the squares and streets of Athens, Aristotle speaks of it in 300. A. C.

All this for food use as the pigeon has never escaped human appetites and has always been considered an animal to feed on: in the Middle Ages each castle had its dovecotes in the towers, which guaranteed an always available supply of fresh meat, considered a delicacy, so much so that it is used as a bargaining chip in commercial negotiations.

The pigeon has long been one of the most used birds in traditional Italian cuisine, appreciated in the Middle Ages, for its almost white meat, and today in Italy it manages to escape a destiny of killing for food use only by virtue of breeding difficulties compared to other small birds, such as quails, and to hygienic concerns; even if the younger animals are still victims and, in countries not far from ours, such as those in North Africa, their food use is instead regular and widespread.

Their use as food took place in spite of the fact that they have always been given special gifts and abilities, those that allowed them to transmit dispatches and made them famous everywhere with the nickname of “carrier pigeons”, able to perform a sort of postal service, as they are able to perform flights and then return to the base; still today these characteristics are the object of study: it is believed that they are made possible by olfactory abilities, or referred to terrestrial magnetism, however in relation also to the role exercised by the sun and light.

These skills were known all over the world: they were in Italy; in China already in the third century BC there was a postal service which, thanks to the traveling pigeons, put Beijing in communication with all the regions of the Empire. There is news regarding India; historians say that in Persia, since the breeding of pigeons is forbidden to Christians, there were many conversions to Islam to be able to circumvent the ban.

Hardly any other bird was as close to man through the ages as the wise dove. There are more than 300 different species worldwide, from the city to the forest pigeon.

The smallest pigeons are only as big as a lark, the largest species reach the size of a full-grown chicken. The versatile birds have been kept by humans for thousands of years and therefore can be found both in the city and in the countryside.

Also, the Mesopotamian Ishtar and the sky goddess Astarte was the dove sacred. And in the biblical Book of Moses, it is a dove that Noah sends out from his ark as a scout after the Flood – on the second flight she returns with an olive branch in her beak and Noah knows that she has found land.

In the Christian culture of late antiquity and the middle Ages, therefore, the dove was also considered a symbol of love and the reconciliation of God with men.

Force animals have their spiritual way of protecting us. Some of these nature spirits always accompany us, but there are also power animals that only assist us in certain phases of life and offer their protection.

These are the three key words that best symbolize the quality of Power Animal Pigeon. Already in a well-known fairy tale of the Baroque period, it was pigeons that gave peace in the “war of the birds”, later the pigeon became the world-famous symbol of peace.

When the dove comes to us as a spirit, we can learn these precious and spiritual discoveries from it:

Pigeons have always embraced the principle of hope, like the dove that gave Noah the certainty that the all-consuming deluge is finally over. The power animal dove shows us the wonder of creation and that even after the longest night the sun shines again.

Pigeons are characterized by their harmonious flying style, while there are real artists of the skies such as the dive pigeons. The power animal dove encourages us to allow more balance and in this way to find a greater, inner harmony.

Worldwide, the dove is a symbol of peace. The power animal dove encourages us to end conflicts that we have with others in a constructive way or as an intermediary to help people in our immediate environment to resolve their conflicts.

When the pigeon comes to us as a power animal, not only do we have reason to look forward to good future prospects, but we are also able to dispel disputes or conflicts.