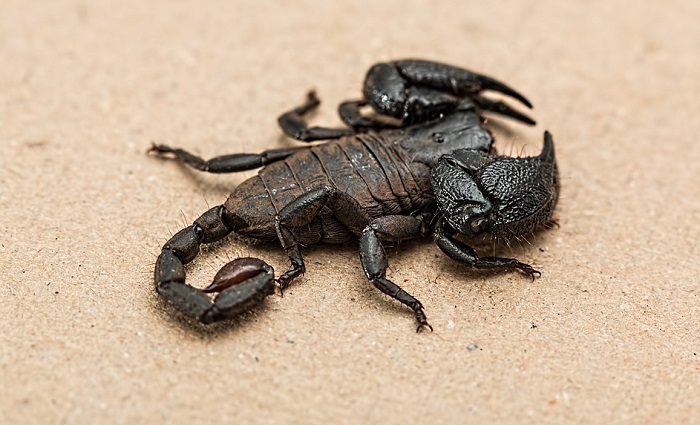 Scorpions are not exactly the animals where everyone calls “oh how sweet”. They even have a very bad reputation. Wrong – as is usually the case when it comes to wildlife.

There are a lot of scorpion species that actually belong to the arachnids. That may make it even more unsympathetic to some people. Their size can vary between a few centimeters and a good two decimeters, and there are some species that also live together in groups.

Scorpions are very defensive animals. They can use their threatening spikes at lightning speed, when needed, as in hunting or defense.

However, they only do it then. Otherwise, they are rather shy animals. And only very few representatives of the species have a deadly poison for humans.

These amazing little spiked bearers have always kept people busy, because where these animals live, they have long been a place in mythology.

There are countless stories and legends about scorpions, as well as the many deities of the desert or other habitats in which they occur or have an affinity for them.

One of the most famous is the ancient Egyptian goddess Selket, who is associated with a scorpion. Her headdress looks quite similar to such an animal, but on closer inspection is none. But nevertheless, the scorpion is their companion, the patron goddess of the healer.

Poisons can also be used for healing as well as for harm, be it said to those who see an illogical. This healer is always near death, he is an animal of transition.

The scorpion belongs to the intermediate realm that leads from life to death. Where it appears, it becomes necessary to cross a border. It is definitely the time to make a change. The timing would not be unfavorable, because everything is there. The path becomes visible and you are not vulnerable.

Something sometimes “dies” during a transition, but it’s usually something you can easily do without. Old fears or dependencies for example. And the scorpion teaches that sometimes a quick action is necessary, a bold move. As fast as a little scorpion sting. Because the time is there and there is no other way.

The nocturnal scorpions cannot see well, but feel all the better. The power animal scorpion bequests this property to its companion, who can perceive much more with the hands than with the eyes. At best, they are sensitive. A second outstanding feature of scorpions is their glow.

They flare under UV light and can keep the sun in them. Scorpions can turn on their inner light, even when it’s dark outside, as the Totem animal Scorpion reminds us. Young scorpions have another special feature, they skin up to eight times until they are fully grown.

In other words, they strip off old stuff, let go and are ready for something new, even if they seem to be vulnerable to the world for a while.

When the scorpion enters our lives, it is always a clue to deal with its vulnerabilities and dark sides. He sits securely in his hiding place and leads us through the darkest night. The scorpion challenges us to deal with transience and the depths of life. Which of our own sufferings calls for salvation and deliverance?

He is an indicator of his own shadow and leads safely and cleverly through the underworld. He has a sense of danger and can also make use of his sting and avert the deadly, or dispose of the power-consuming. Fittingly, he guards a neurotoxin in his sting.

A poison that lifts above the mind level and brings us into other worlds.

The scorpion is one of the fascinating creatures of wildlife. Maybe that’s why he always persuaded people to say. Power animal scorpion, here watercolor in rainbow colors.

Also as a zodiac sign, he is in many controversial or feared. Whether power animal or star sign – both have common characteristics. That’s why you cannot separate the power animal Scorpio from the zodiac sign.

Biologically, the scorpion is one of the spiders. He lives primarily in the desert and is nocturnal. Striking in his physique are the clear outline, he resembles almost a geometric figure with his strong scissors and the silhouetted articulated body.

Concise is the bent poison sting, which contains nerve poison. The scorpion uses it only in really serious cases, either if he does not get his prey crushed with his scissors or if an enemy threatens him.

Contrary to the popular belief that scorpions like to sting, it is more likely that they prefer to hide rather than attack themselves, the sting is more for defense. Scorpions are loners, only a few species live together in social organizations.

Scorpions bring messages from other worlds, even in the middle Ages, it was believed that only his portrait helps against curses and the evil eye, so it was a popular talisman.

As a force animal, it helps to recognize living conditions that weaken our soul light and raise them to awareness. The power animal Scorpio gives momentum to change these circumstances, stands by us reliably, so that we can heal ourselves.

At the same time, he is with us to dive into the darkest depths and helps us to transform old injuries. Scorpions lead to the bottom of one’s own self. Incidentally, they are a very powerful force animal, people who were born in this sign of the zodiac, know that scorpions like no other sign of the zodiac combine fire and water – passion and emotions.

Scorpions are small to large insects of the arachnid family (among others the spider and the tick belong). With the exception of the Arctic and Antarctic, scorpions are close to the world, but are preferred in deserts, semi-deserts, savannahs and tropical forests in northern Europe, North America and South America, as well as in Africa and Asia.

The nocturnal scorpion lives mainly in sandy or stony soils and keeps as a cultural successor in the vicinity of human dwellings.

Most scorpions are rather predators and feed mainly on other insects and arachnids, sometimes even on lizards, snakes and snails.

In many African and Asian cultures, scorpion has always been considered a symbol of life and death, as it can decide on both. He can take life if he uses his sting and he can give life if he does not. But the scorpion also symbolizes fear of suffering in life and fear of death as salvation.

In Egypt, there is the protective goddess Selket, which has always been presented with a scorpion or scorpion sting on his head. In ceremonies she is often called to protect the lives of people and to lead the dead safely into the underworld.

According to a legend, the goddess Selket once helped seven scorpions when she was in need, and since then scorpions have been her allies.

Even among the Maya there was a scorpion deity – she called herself Ek-Chuah and was the god of war. On many drawings Ek-Chuah is depicted with a scorpion’s tail, which symbolizes the deep connection of this god with the scorpions.

In the second part of the modern adventure film trilogy “The Mummy”, as well as in the independent film “The Scorpion King” (= The Scorpion King), there is an interesting treatise on the pact of a desperate and power-hungry warlord with the goddess of death Anubis, which sends a scorpion to help, In return, the warlord named Mathayus is to leave his soul to the goddess of death.

By consuming the scorpion sent by Anubis, the pact will be finally sealed and Mathayus will be able to recruit as a soldier undead creatures from Egyptian mythology to use for his own purposes.

However, after the consumption of Scorpion, the proud and victorious warlord himself transforms into a mythological being, half human and half scorpion. That was the price for the almost invincible army of the undead and their own survival.

Either way, there is no denying that this powerful animal has its own story and power hidden behind it that allows it to be the subject of talk for so many years.

Whether you choose to believe in its power or not, scorpions can be good spirit animals that can lead you to a life of success and power.