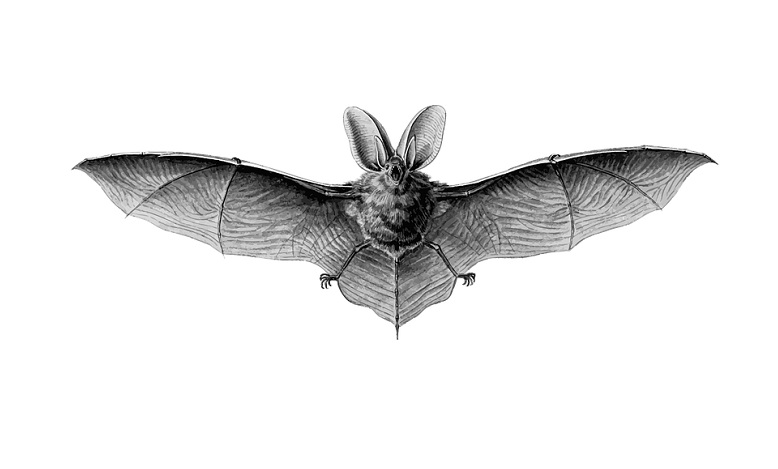 How many sayings have you heard about bats! There are those who love them and those who hate them.

Who venerates them and who would willingly do without them? This in every corner of the globe and in every age. Suffice it to say that many symbolic meanings are linked to the bat.

Being animals able to fly silently and dexterously in total darkness, they have in fact always been associated with the fear of the dark, of the night, of magical forces, of darkness and therefore also of death.

Generally, in the West since ancient times it was considered a “negative” creature that was a harbinger of misfortunes, with the devil who often in pictorial representations was painted with lugubrious bat patagi.

The angel, on the other hand, was proposed with pure white bird wings. In church, for example, women had to wear their hair covered because of the belief that bats, and therefore demons, were attracted to their hair.

In the East, on the contrary, in some cultures it is even revered. In Indonesia, for example, there are caves frequented by pilgrims devoted to bats.

In China, instead, the bat is present in the coats of arms of some noble palaces, because it is synonymous with happiness and longevity. While if they are represented in pairs, they are good luck. When the good omen that accompanies it is manifested, the bat is instead represented upside down.

As far as longevity is concerned, according to legend, bats can live more than a thousand years because they feed on stalactites that, in addition to longevity, give them the ability to take on silver reflections.

Generally, in many Eastern cultures there is often a five-pointed sacred star, each representing a type of happiness: longevity, wealth, tranquility, health and good death, or a natural death. And the bat is always “guarding” this star.

In Central America, however, the bat is a symbol of rebirth and is highly revered. This veneration had an important role in the cultures of the Aztecs, the Mayans and the Toltec.

For these populations, in fact, the bat was seen as “an animal that lives in dark crevices reminiscent of the darkness of the tomb” and which, at the same time, rests upside down, that is in the position a child has in the maternal womb, just before being born.

During the initiation rite, shamans were buried even for a whole night, to test their psychic and physical limits, and when a bat appeared in a dream, it was the “sign” of the need to detach from one’s ego in order to then progress into a better existence.

Taking a step further back in time, it must be remembered that in ancient Rome bats were even nailed to house doors, to defend themselves from disease and witches! It was thought that the silent presence of a bat, signaled the arrival of a misfortune or, in any case, of a great storm.

In some nineteenth-century prints bats are portrayed as executioners with an unhealthy predilection to suck the blood of children and adults or strongly interested in settling in thick human hair, hence the belief that they stick to hair. Nothing could be more false!

Also because the risk of death for an animal that gets entangled in a hair is very high and this is well known by bats. In other cases, on the other hand, they become unconscious victims of pseudo remedies designed by humans who, in some parts of the world, use their blood as a remedy for female sterility or as an ingredient for miraculous love potions.

An embroidery on a Chinese imperial robe depicts bats whizzing on ocean waves, swollen and spiraling, in a fit of joy towards the sky.

Symbol of longevity and blessing, this feminine dress was reserved for “great occasions”, such as birthdays or anniversaries.

Bats are unique mammals in many respects. Not only do they glide, but they can also fly long and vigorously. They hang upside down, anchoring themselves with the hooked fingers of their paws, to sleep, rest and even to give birth and breastfeed the little ones.

Using an echolocation system, bats fly with their mouth open and their teeth uncovered, emitting ultrasounds by means of a natural sonar in the shape of a leaf, spike or lance, located on the nose and mouth.

The chiroptera (from the Greek cheir, hand and pteron, wing) have long and tapered fingers supporting the rubbery membrane and the vascularized tissue that wrap these flesh-and-blood gargoyles like a mantle. They have an opposable clawed “thumb” and brain circuits similar to those of primates, while retaining a rodent body.

They fly like birds, flapping their wings, but they have neither bird nor angel feathers. Bats embody the projections of an “upside down” order that forces our perspective into the night, the underground realm and the equivalent cavernous depths of the psyche.

The emergence of bats, in search of food, at the setting of the Sun, in thousands or millions, is perceived as the free breakthrough of the hidden primordial forces of the world of the afterlife.

Fantasy has associated bats to the New Moon, to the Full Moon and to the realm of spirits and therefore, to witchcraft, spells and magic arts.

The small bloodsucking bats native to Central and South America have long been associated with the mysteries of death linked to the eternal cycles of rebirth, as well as to fear for animal-men and vampires. Their sharp teeth resemble the flint knife that sank into the sacrificial victim’s chest.

The blinding demon-bat Zotz was the one who devoured the light of day; the “Bat House” was one of the underground regions to cross to reach the realm of the dead (DdS, 228).

However, his seemingly irregular fluttering in the darkness, which we associate with “lunatic” thoughts, is not at all irregular, but is guided by a sonar; likewise, there exists an instinctual coherence in the apparent incoherence of the obscure upheavals of the psyche.

In the rain forests, the “flying foxes” are prolific pollinators of the flowers that bloom at night, with an association to the nectar sweets, to the magic efficacy and to the fertility of the night. A cosmogonic myth depicts the bat as the one who managed to see in the dark fissure before the creation of the world, when the sky and the earth were held together like rock.

Certainly one of the most misunderstood mammals. In the past, in Babylon, it represented the souls of the dead while in China it was a symbol of happiness and long life, for the Maya the bat meant initiation and rebirth, in the Middle Ages they were miniature dragons.

This animal, according to an ancient legend in which two brothers have to face seven tests, symbolizes the loss of the faculties if the change and the transition are carried out carelessly and the promise of rebirth and the exit from the darkness if the right passages are respected.

The bat is associated with the death of the shaman, the collapse of the ego, the resurgence of the deepest fears, the death of a part of itself in favor of a new life.

The bat energy is bursting, it cannot be avoided, it upsets life and existence, it modifies and transforms. Sometimes this can be traumatic, situations get noticeably worse, everything seems lost.

This is until the past and the old are let go, change is a blessing, a new possibility, when we ourselves begin to see the world with new eyes, everything changes and starts to shine with lights and colors never seen before. There is no death that implies a rebirth.

The bat is a nocturnal animal, the night is often considered the mother of all fears. This totem urges us to face our fears, to react. It has sharp teeth and long like needles, it is the only mammal with the ability to fly, the bones of the fingers are thin and very long to support the wings made of a rough and resistant skin, it symbolically reflects the ability to reach new heights as consequence of the change.

The bat sleeps upside down, a position that can be traced back to the tarot card and therefore to the ability to see the world differently from others, to penetrate new barriers, to resist forcefully the adversities of a path full of obstacles.

The bat is a sociable animal, it lives in flocks so it reflects the need, for those who have this animal as a totem, to live among people, to communicate, moreover, for its ability to locate things around themselves thanks to sonar , can indicate the capacity for clairaudience that awakens the ability to hear spirits.

For the Native Americans of the north of the continent these nocturnal animals are still considered a symbol of energy.

The shamans used it to get the “night view”, or the vision during the dream or state of trans, able to reveal any mystery. For this reason in the initiation rites the shamans usually invoked the spirit of bats.

During the ritual, the future spiritual guide overcame the barriers of illusion to access knowledge.

Finally he returned as a wise man because he was inwardly enlightened and consequently a point of reference for the tribe. According to this concept the bat is very sensitive and represents intuition, dream and vision.

As a totem, bat can be best described with these words: