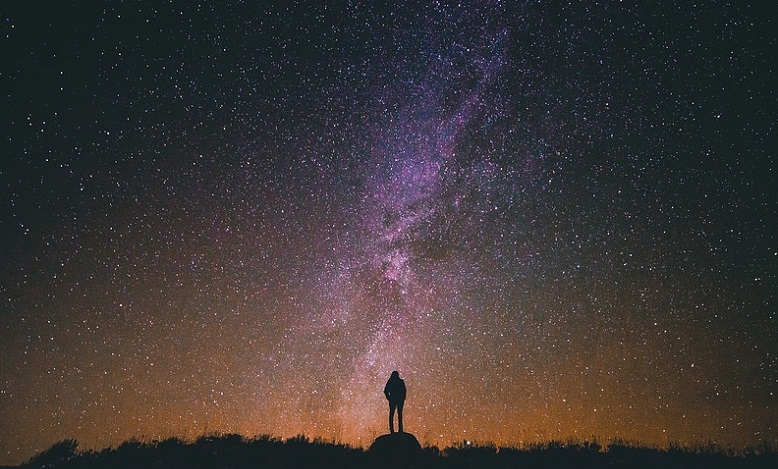 By definition, the star is a celestial body that shines with its own light. The star closest to the Earth is the Sun, venerated since ancient times as a divine entity and subject of numerous cults.

However, the stars that feed our desires, which bind our destiny to a higher reality, are those that shine at night. Poets, philosophers, painters have found their maximum inspiration in the starry sky.

Dante has built a whole system of correspondences in his Comedy, so much so that each song closes with the term “stars”, to indicate the connection of human destiny with the divine.

The appearance of the stars in the visual arts tells a long story. In the Adoration of the Magi, Giotto paints a star: it is Halley’s Comet, through which the painter succeeds in inserting an astronomical fact that actually happened into a sacred context.

Mythology and astrology merge in the canvas by Tintoretto, which tells the origin of the Milky Way (1580). The sprinkling milk from Hera’s breast turns into the sky in a swarm of stars.

From the stars of Dürer, Giorgione, Carpaccio, Campagnola, Elsheimer, each of which conveyed its own message, one cannot fail to mention the “starred” painter par excellence: Vincent Van Gogh. His stars are the emblem of all his artistic and life philosophy. Shortly after his nocturnes, in 1890, the artist took his own life. Despite the psychic chaos of those years, he remains the serenity of a starry night.

If in art the star is “an interjected faith, so distant from Giotto’s theology but at the same time closer than ever to his yearning for the divine”, what is its meaning in the symbolism?

In the collective imagination, the star has always been a positive symbol: it expresses the desire for light, for hope.

The star also indicates the desire for happiness. No coincidence that on the night of San Lorenzo you go hunting for shooting stars! The ichnographically the star can be represented with a different number of points, assuming a different symbolic meaning.

The four-pointed star or star cross symbolizes the axis of the world, the balance of the forces of the universe. Today the symbol is present in the flag of N.A.T.O., the international organization for the collaboration in the defense of the Countries adherent to it.

Among the most esoteric and mysterious symbols is the five-pointed star. The pentacle, or pentagram, or pent alpha, is both good and evil. With the tip pointing upwards, it is an instrument used to invoke benevolent spirits, but downwards, it recalls the forces of evil. The symbol is commonly known as circumscribed in a circle.

In ancient religion, the pentacle was linked to Venus, representing the power of sexuality. The whole Universe is enclosed in a single symbol: water, air, fire and earth sum up all the spiritual forces, in a cyclical relationship on which the cosmos is based.

Sensible and otherworldly reality merge in the image of the pentacle, but it also puts the human figure in communication with the infinite, according to the famous representation of Vitruvian Man by Leonardo Da Vinci. For Freemasonry “it represents the light that illuminates the disciples of the Masters” and is “a symbol of intelligence and of Science”.

Note is also the six-pointed star, or hexagram, or Star of David. The symbol consists of two intertwined triangles, expressing the union of heaven and earth, above and below. According to legend, King Solomon, son of David, used the symbol as a talisman to ward off demonic forces.

In magical practices, the Seal of Solomon has the power to protect against evil influences. The hexagram synthesizes the harmonious union of the two worlds, among which the human being is suspended.

Associated in antiquity with female divinities, the Knights Templar, devoted to the Magdalene and to the black Madonna’s, took the emblem of the Beatitudes, which recalls the eight-pointed star.

The passage from paganism to Christianity has made this symbol associated with the Marian cult. For this reason we find it depicted on the mantle of the Madonna or even in the architecture of different places of worship.

If through the symbolism it is possible to understand the mysteries of the Universe, then looking at the stars in the most prolific period of the year is surely the way through which the cosmos is talking to us.

The stars illuminate the night sky and rotating around the Polar star (axis of the world) are considered symbols of the cosmic order.

According to the Jewish cosmology, on each star an angel would watch and the constellations would be groups of celestial spirits linked together by a relationship of harmonious collaboration.

In Christian iconography the depictions of the stars indicated celestial events (but the ornamental motif of the starry cycle was already used by the ancient Egyptians to embellish the ceilings of the tombs).

The Virgin Mary was often depicted surrounded by a sacred halo that looked like a crown of stars; the multiplicity of the stars indicated the many descendants of Abraham, the shining star of the morning, instead, is one of the symbols of Christ.

The star of Bethlehem, usually depicted with eight rays, was given the task of leading the three magi from the east to the Star of Jesus.

The Indians of the Inca empire thought that the stars were the court ladies of the Moon, and for this reason they had given them a space (at the time of the kingdom of Cuzco) next to their sovereign, so that they were as close as possible to serve her, in fact, they believed that the stars moved in the sky following the Moon and not the Sun, since they were seen only at night.

The Aztecs considered the protective stars of the warriors dead in battle with honor. It is not easy to explain the symbolic meaning of the constellations.

Only some of them can be considered as points that together create figures that bear their name, few of the constellations give the impression of constituting something similar to a unit (Orion and Cassiopeia). In the Archaic age the constellations were useful as orientation points for sailors, and were associated with legends and myths.

Particularly important were those constellations that disappeared at sunset in the evening and then re-emerged in the morning sky.

Some of these names were already known to the ancient Mesopotamian cultures, and were later taken up and partially transformed by the Egyptians and the Greeks. In ancient China the stars were carefully observed and played an important role in customs and legends.

At New Year every person made a sacrifice in honor of his star. The ancient Chinese zodiac has completely different signs from ours: the rat, the bovine, the tiger, the hare, the dragon, the snake, the horse, the sheep, the monkey, the rooster, the dog and the pig.

The years were counted from these signs that governed, and it was thought that the character of those born under these signs was determined by the special symbolic characteristics of the corresponding animal. A Babylonian text dating back to 420 BC gave the different signs the following names:

In the Islamic tradition the repudiation of the cult of the stars, to which the Sabeans of Barra were dedicated in historical times, rests on the legend of the patriarch Abraham, according to whom, he spent the first fifteen years of his life locked up in a cave, where he was fed by hand of Allah, to escape the persecutions of the Nimrod who feared the royal power of Abraham.

Later, his mother led him out under the escort of the angel Gabriel. As soon as Abraham realized that the star was the only visible light in the night sky, he thought it was the Supreme Being and wanted to adore it; but the star disappeared and Abraham made the solemn oath not to worship anything that could set.

A similar thing happened to him both towards the Moon at its rising, and at the early morning Sun. Each time Abraham was tempted to identify these stars with the supreme being and to worship them, however once they disappeared he became sad, so he came to the conviction of having to worship only those who had created these lights and had placed them in heaven, and of not to admit into the other entity outside of this.

The six-pointed star formed by two overlapping triangles, was considered the magical seal of King Solomon and the Shield of David or Star of David.

The five-pointed star, the pentagram also called pentacle, is essential in magical traditions; it is a lucky charm when it has a vertex facing upwards, whereas when it is facing downwards, it indicates a conventional sign that is used in black magic.

The flaming star is very important in the symbolism of Freemasonry, usually with five points, with a radial pattern and a central G that should allude to geometry, to God or to Gnosis. It is the symbol of the spiritual light that illuminates the world, although the interpretation is not at all univocal.

Astrology and Symbolism of the zodiac signs

The ancient scholars had imagined that the perfect circle formed by the twelve constellations of the zodiac, took in the infinite space of the skies, the figure of a gigantic Cosmic Man, whose limbs were formed, each from a constellation.

Many stars have been associated with the goddess, one of the reasons for this association is given by the astronomical study that was widely practiced in its temples.