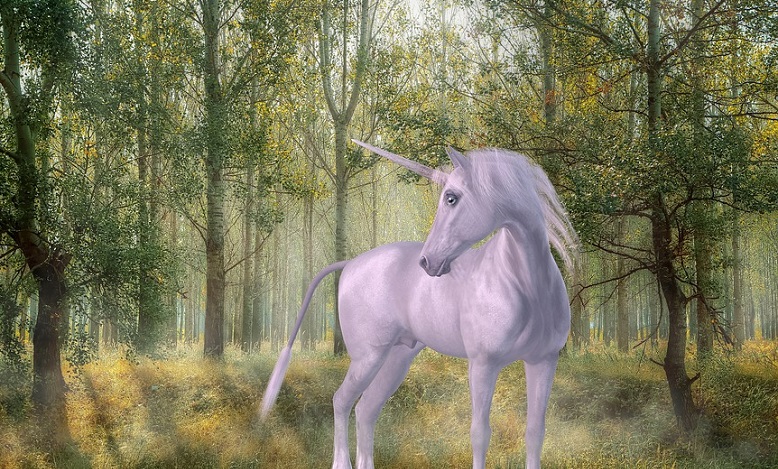 The unicorn is a mythological beast that, although we have not seen it or considered it non-existent, many of us know it or have seen it in photos or have seen it in movies. It has even been the national animal of Scotland for many years.

The unicorn is a mythological creature to which various powers are attributed, such as helping young virgins find love, or having healing skills and being a strong defender.

In the dream realm it is rare to see it, but the dreams in which they appear are usually of good omen.

In this post we will move to the era of mythology and discover the meanings that it brings to our life to dream of a unicorn.

The unicorn, a fantastic and beautiful animal that populates myths and legends, has fairy-tale, dreamy and “magical” features and with its recognized fantastic character it enjoys such a favor, in the collective imagination, that dreams are also popular (mostly of young people and children).

The unicorn is depicted as a horse with a long horn, with healing and antivenefiche virtues, protruding from the forehead and legend has it that its untamed and wild character is tamed only by the care of a virgin maiden.

In ancient time’s long narwhal horns found on the beaches were collected, passed off or resold as belonging to the unicorn and, perhaps it was precisely the perfect, spiraling and intriguing form of this attribute that aroused the idea of ​​such a particular and beautiful rare animal.

Only in the first half of the 19th century the nascent zoological science will decisively exclude the existence in nature of this species.

Here is that the unicorn concentrates in itself the whole charge of love in the widest sense, but without the implications of sex. Symbol of Christ and true, pure and disinterested love that escapes all the lure of matter, its elegant image is linked to the world of fantasy, to something incorruptible and not subject to the laws of time, of necessity, of reality.

Rarely appears in dreams, to indicate the need to carve out an intimate space untouched by the banality or sadness of everyday life. This happens more easily in the dreams of adolescents or children who feel the fear of growing and changing, who experience the fatigue of living in an environment where they do not receive adequate internal nourishment.

They are children or sensitive people who do not stop at the surface of things and who need a lot more than material care. The unicorn that appears in their dreams is the expression of their inner world, of their “feeling”, of a desire for “uniqueness”, depth and completeness.

So also in the dreams of adults the fantastic image of the unicorn enhances the psychic aspects linked to the purest and gratuitous emotions, to the possibility of living idyllic feelings, to desires of beauty and goodness, to the sense of wonder towards life, to the naivety and personal integrity.

But it can also express withdrawal towards reality, fear of sexual intercourse, rejection of the practical and material implications of a love relationship or of any relationship, highlighting adherence to an imagined and dreamed world which tastes like the ideal.

In the first instance, the meaning of dreams with unicorns is related to early childhood; that stage of the purest innocence in which all fantasies seem real to us and in which we can dream of unicorns and fairies and be happy imagining that we play with them.

This is precisely why you have this dream when you reach adulthood: because you feel that you miss that innocence that you lived in childhood, because now you are in a skeptical world in which problems and concerns are all that you seem to see.

This dream is also loaded with magic and positive vibes for the dreamer, and that is why it rarely happens. This dream is as important as waking itself, because once you wake up from a dream with a unicorn, you must convince yourself that everything is possible.

You must stop thinking that the world is cruel and indifferent and think that there are things for you that you have not yet seen.

Unicorns can also represent a challenge, or those goals that we consider unattainable. This dream tells us that those goals we have could be closer to us than we think. We just have to get up and look for them.

Dreaming of a unicorn when single – If you dream of a unicorn when you are single, it is very likely that you will soon find love. In ancient times it was believed that one of the attributes that the unicorn had was to meet your true love. This dream can guide you to one of the most important magic of all: love.

Dreaming of a unicorn when sick – If you are sick this dream could tell you that soon you will be much better, and that disease that had afflicted you, it will not take long to remit and you will feel like a million dollars.

Dreaming of a unicorn that protects you – Dreaming of a unicorn that tries to protect you from some evil is an excellent omen, because it tells you that even if problems come to your life, or that there are obstacles that you think will be too big to overcome, you can overcome them without almost noticing that they were there, because the Magic will be with you accompanying you.

Dream of a tame unicorn – If you dream that the unicorn is very docile and offers to be caressed, it is interpreted as having achieved the ability to tame and rise above the problems, and not vice versa. You are a strong person who is in an excellent point of life and you will enjoy great things.

Dream of riding a unicorn – If you dream of riding the unicorn it means that you will begin a journey of discovery that you will be filled with once it is over. You are at an excellent point, and perhaps on that same trip you can meet that special person that will fill your days with joy.

You may have to stop a construction, or take another look at that project you were thinking about, it might not be ready to launch.

Dreaming of a fake unicorn – Dreaming that we see a false unicorn tells us that we should not be too confident and pay attention to everyone’s flattery, because there may be people around you who, although they disguise themselves as kind and kind beings, who only seek your good, they can be people with double intentions that could harm you.

Dreaming of a unicorn attacking us – Dreaming that the unicorn attacks us is interpreted as setbacks that will delay or spoil a project we already had ready or a trip we planned to do very soon.

Dream of flying on unicorn’s back – Dreaming that you fly on the back of a winged unicorn is interpreted as that the dreamer was raised to heights that he never suspected he could reach.

Perhaps you could take an important position in a company or feel a happiness that you had not felt before when it comes to the spiritual realm.

Maybe we should change the way we act in order to avoid problems.

Dream of white unicorns – In dreams, white unicorns reveal to us that we are pure, honest and sincere people, who also have an air of that innocence that is represented in children.

We must continue to grow that honesty and innocence, but without leading to naivety, because people could try to take advantage of us.

Dream of baby unicorn – A baby unicorn in our dreams tells us that we will soon be carrying in our arms a son who will be the light of our lives.

It also tells us about that innocence that has been lost in your life.

Suppose a girl sees a fairy-tale creature in her dreams. Why do children dream of unicorns? This symbol promises a new romantic relationship for the dreamer.

A light flirtation with a high degree of probability will flow into something serious. In the near future, the dreamer has every chance of starting a family.

Mythical creatures can be dreamed by adults as well. This plot promises both successful career development and mutual love. Why dream of a white unicorn woman? This means that luck will fall asleep in all its efforts. If the dreamer has long dreamed of changing his life, then it is the right time for courageous actions.

Why do children dream of unicorns? The appearance of a mythical creature in night dreams symbolizes the beginning of a new life. Problems and pains will remain in the past, fortune will literally pursue the sleeper.

Furthermore, a fabulous creature can be imagined in a meeting with the second half.

Even married men can dream of a unicorn. This story suggests that a person makes too high demands on loved ones.

Friends and relatives of the dreamer cannot satisfy his expectations, which leads to arguments and conflicts. You need to start changing the world for the best of yourself, working on your shortcomings.

What does a famous psychologist say about these dreams? If you rely on Freud’s interpretation, then these fabulous creatures are dreams of betrayal.

There is a high probability that the second half of the sleeper has started or is about to start a relationship on the side. A dream also indicates that the owner will know about the betrayal as a last person to know, when it will already be obvious to others.