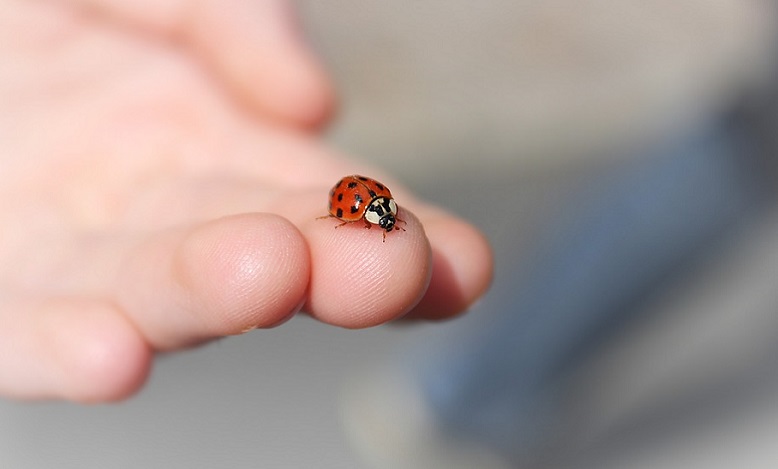 Although scarcely used in ancient art, the ladybug is a positive symbol that is very present in contemporary culture, after having experienced a legendary and fortunate season among the children of other eras. It is certainly, even more than the butterfly, the most pop animal in the world.

Ladybirds, considered messengers of fortune, are insects that are anything but ugly to see and this is one of the first points in their favor. Enjoying a good reputation, especially in the insect world, is not so easy.

Surely, however, red and black dots make the ladybug a nice insect, so much so that the encounter with the latter is a real privilege.

His favorite environments are the fields, the agricultural areas, the green gardens as well as the city parks.

In fact, in winter, the ladybird prefers open spaces located mainly in the south, so as to benefit from a greater number of hours of light.

The cheerful polka-dot decorations, the simple hemispherical shape, the face of “simple” appearance, its visual relevance to Coca Cola, make it absolutely an object much represented in the popular and industrial culture of the twentieth century. It means joy, cleanliness, fairness, goodness, love.

The Ladybug was and is considered a lucky charm especially when associated with the four-leaf clover.

It was also used for small infant divinations, compared to the possible arrival of a news story, in some cases linked to love. A ladybug was placed on a finger or on a hand, leaving it free to move. And it was said “If it is bad (the news) it is, if it is good it should be”. In the variant, the indicative: If ugly is, if beautiful goes “.

In some cases the ladybird flew. In others he stopped, but whoever held it on his hand did everything to free it, hovering in flight. Because of its shape, which can remind a little heart and as it appears in spring, it becomes a symbol of love between man and woman and courting.

In scouting the name “ladybug” is given to girls between 8 and 11 in groups where there is a circle. The ladybug’s uniform features a red 7-point black circular headdress.

Then there are other popular legends in which the ladybug is linked to the Madonna which sometimes was dressed in a red cloak and the seven dots, typical of the most common species of ladybug, which represented either seven joys or seven sorrows.

Or even to the Lord (the ladybird is also called the Madonna beetle or gurnard of the Lord), while in the Middle Ages the German and English peasants believed that it was a gift of the Holy Mary against the aphid scourge and for this reason they renamed it Maria’s beetle. Also in France it is called the beast of the Lord.

In England it is “ladybird” or “ladybug” to indicate “little bird or insect of a woman”, while in Russian “Gods cow” is the “female of the Lord”. In Finland the tradition that brings the ladybird back to religious benevolence is alive: “marienvoglein”, or “insect of Mary”. Finally, there is a legend about why the ladybug has seven black spots.

A legend tells that the ladybug was the emblem of the ancient Goddess Lucina (Juno for the Romans), goddess of light, of labor and birth, but also of a Goddess of love and beauty. But not only has the red color always represented the victory over enemies and diseases (in ancient times doctors used to wear red robes for patients suffering from rheumatism). 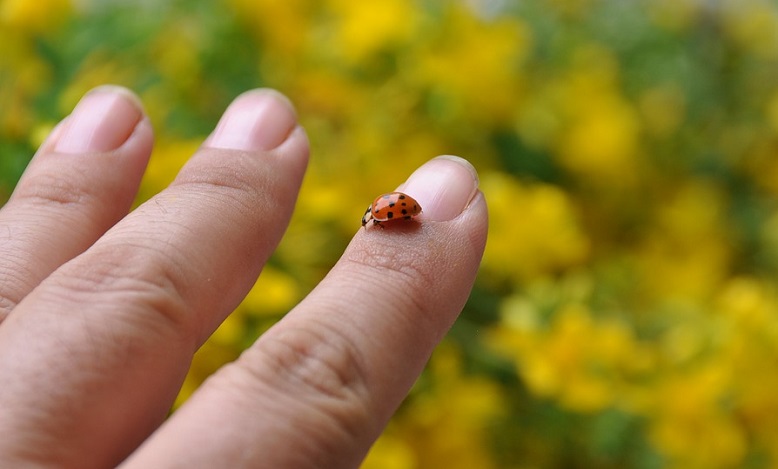 In Estonian mythology, the ladybird is the animal chosen by Linda to search for a powerful magician who can save the hero Kalev’s life. Because of the sympathy it inspires, the ladybug is often used as a symbol par excellence of phyto-sanitary defense techniques with low environmental impact (biological control and integrated control) and proposed in brands and marketing campaigns.

For example, the advertising campaign that launched the brand of the Melinda consortium of the Val di Non was based on a spot that proposed the ladybird as an emblem of a production based on one of the first integrated control disciplines started in Italy.

Used as a symbol by the oil company Total (which for a period in the seventies, gave magnetic models to those who supplied itself free of charge). In the Triveneto area it is also, curiously, called “the ave maria goes to school”.

In the Saluzzo area children were taught a nursery rhyme that recited: ladybird flies fly, teach me the way to go to school. If color is, therefore, one of the main characteristics in sanctioning the marriage between ladybird and luck, a second aspect to consider is that linked to the culture itself.

In fact, the red and black polka dot insect is closely related to a Nordic goddess symbol of fertility named Freyja and also to the Madonna. Indeed, the latter, in the Middle Ages, was dressed in a red cloak and the seven dots, typical of the most common species of ladybug, represented respectively the seven joys and the seven pains.

In the Florence area it is called Lucia, most likely because it is popularly associated with the Sicilian saint of the same name: it is believed that by collecting this insect and making it fly away, the sight of those who do it is protected; on the contrary, those who hurt or worse still killed the ladybug, would be seized by sight problems.

Ladybugs are predominantly predatory zoophages at the expense of insects and mites. Within the family there is also the presence of mycetophagous species and phytophagous species. The latter are present only in the subfamily of the Epilachninae.

The zoophagous ladybugs can help cleanly the agriculture as they are able to eat the mites, which remove the sap from the buds and make the plants suffer. For these they are used in apple plantations in Trentino.

Ladybug Landing on You – Symbolism

A ladybug landing on you. What can it mean? This definitely brings you luck. We have always grown up with this saying, because this cute red insect with seven black points has always enjoyed a good reputation and is considered a messenger of happiness.

The number seven is then associated with luck, it is said that the number of black dots on the back of the ladybug indicates that of the months in which you will be kissed by the goddess of fortune and that money will soon arrive. Luck is greater if the insect settles the time necessary to count to 22.

Then there are other popular legends in which the ladybug is linked to the Madonna which sometimes was dressed in a red cloak and the seven dots, typical of the most common species of ladybug, which represented either seven joys or seven sorrows.

Or even to the Lord (the ladybird is also called the Madonna beetle or gurnard of the Lord), while in the Middle Ages the German and English peasants believed that it was a gift of the Holy Mary against the aphid scourge and for this reason they renamed it Maria’s beetle.

Also in France it is called the beast of the Lord.

Not only in Italy is there the belief that the ladybug brings good luck: in Hebrew, for example, it is called “little horse of Moses” or even “little messiah”, while in Turkey the translation has exactly the meaning of “good luck insect”.

The legend of the seven-point ladybird

Once upon a time there was a man named Urunti, who lived a long time ago on earth. Urunti was a giant being and it was up to him to maintain justice among the creatures that inhabited the planet.

At that time death did not yet exist and everyone continued to live forever: no one was born and no one died.

One day, Urunti decided to take a walk in his flower garden and stroked the rose to say good morning. He injured the thumb of his hand with a thorn and a drop of blood fell to wet the ground, but since death did not exist, that drop came to life and began to walk.

Urunti looked at the new red creature with six small black legs and decided to take it with him to know the world; the little ladybug watched intently, but saw no things she liked.

The animals were injured, they grew old but never died, and she, who had just been born, saw only ancient creatures that already knew everything. To remember what he had seen, he asked Urunti to draw her small black spots on the back, one for each of the injustices he had observed.

Urunti marveled at the ladybug’s desire, asked her what he could do to remedy and preserve justice: But the man didn’t know what death was, so the ladybug, to teach him, pricked himself with that thorn that had wounded Urunti’s finger and gave her life.

From that day, Urunti introduced death and birth into the world and, after doing so, he finally decided to fall asleep next to the little ladybug with a spotted back.

Having a ladybug land on you is definitely a symbol of good luck and prosperity. Considering everything we stated above in our text, ladybugs haven’t become symbols of luck in the past century, since they have been that for hundreds of years and across many cultures.

Therefore, next time ladybug lands on you, don’t be afraid and let it bring you luck.