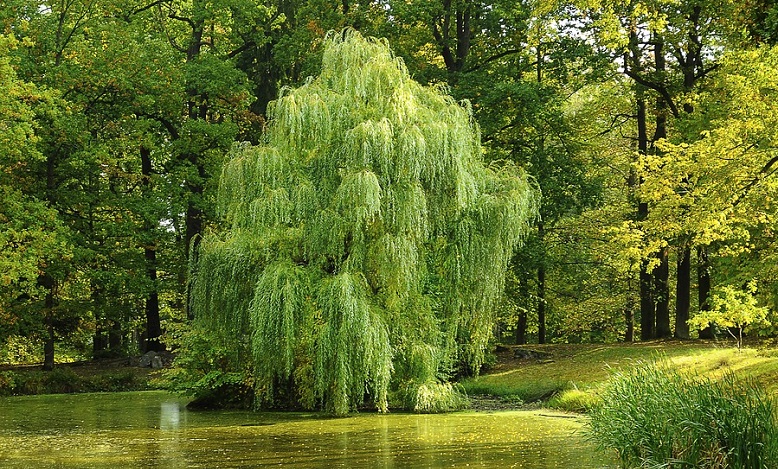 The willow has many types. Among the best known are probably the berry and the wicker. Generally it can be said about willow trees that they appear very “fast-paced”. The soft wood, the willow that likes to stand on the water or in boggy areas, quickly rots and quickly rots, but just as fast the willow drives out again and again no matter how often you tremble it.

The broken branches of the wicker only have to be put into the wet ground and they will strike roots. It is a seemingly weak tree that makes its weakness a strength. In addition, willow bark is a very strong binder. The willow has always been associated with the waning and waning moon, firstly because of its love for water and also because of its constant dying and expulsion.

The hollow trunks of the willows provide a habitat for numerous animals and previously they were thought to secret ways into the Otherworld. The word willow comes from the Indo-European word root uei, as well as the words “soft” and “woman”. Willow means as much as flexible.

With the willow many witch spells were associated. At the same time it was considered a virgin tree, as it bears flowers, but never fruit. In ancient Europe, their essences were therefore considered a contraceptive and negative for the libido.

In China, however, willow is a symbol of sexual desire and in many places it is associated with pregnancy and motherhood.

The willow is grief in many cultures. Willow flutes were played at funeral ceremonies. A legend tells of a man married to a woman who stole away from it every night and sat down by a brook under a willow.

The man watched this one night and then felled the willow. But his wife died with the tree, because she was really a tree spirit. Their children carved flutes from the willow wood and when they played on them they could hear their mother’s voice.

As a dream symbol, the willow appears mainly as a weeping willow. In this form it is interpreted as an unfavorable omens or as a repressed mourning. A willow is also traditionally associated with pregnancy and motherhood. Others see in her a picture of mental illness.

The willow can also stand for flexibility and resilience – more negative – for a missing backbone and an unstable state of mind.

The willow can grow up to thirty meters high as a tree, as a dwarf shrub it brings it only to three inches. For bees and bumblebees, it is an important food supplier, as many types of willow flower very early in the year. At Easter, a willow branch with inflorescences called kitten is found in many parts of Europe.

In the past, the branches were an important component in the construction and roofing of houses. Wickerwork was also made from it. Today, the wood of the branches is processed into chipboard and veneers. In gardens and parks, willows are used as ornamental plants.

If someone is dreaming of a willow, they may long for a quiet place in nature. Especially weeping willows have a special magic. Perhaps the dreaming in the dream sees a possibility to escape the stressful everyday life for a while. In the interpretation of dreams, the focus is primarily on the current state of mind of the dreaming.

In dream interpretation, the dream symbol “willow” has multiple meanings. It stands as a fast-growing tree for fertility and can point in the dream on a pregnancy or an imminent delivery. Its bark contains healing substances, so that the willow can also be understood as a symbol of caring, healing and motherhood.

A weeping willow on the water is in the dream interpretation an unfavorable omen. The dreaming himself or someone close to him has sorrow and needs comfort. The dream symbol embodies the negative emotions.

The willow is both flexible and stable. It owes its flexibility to its flexibility. In dream interpretation, as a dream symbol, it is a reminder to be either steadfast or compliant at the right time, depending on the situation.

However, in dream interpretation, the tree can also point out that in real life the dreaming has to deal with a person who lets everything be done with him. The dream symbol “willow” warns not to misuse this situation.

The willow catkins indicate that the dreaming lives or wants to live in peaceful, if modest circumstances. If he picks a twig with kittens, this shows in the dream interpretation that he feels deep feelings for a new acquaintance.

The willow as a tree of the gods

The Celts made dolls of willow wood, which were burned to drive away the god of winter and transform the goddess of death into the brigid, the goddess of light. Brigid, the mermaid, has been associated with the cool and light willow. Brigid was the muse of the healers, shamans, poets and wizards, and so the willow tree, with whose help many evil spells were being made, became the willow.

The willow was also considered a threshold tree. Through their hollow trunks magical beings were supposed to enter the Otherworld and they were considered to be a combination of water and land, dying and birth.

The willow as a medicinal plant

Especially the bark of the willow is traditionally used in folk medicine in a number of complaints. The willow bark contains a lot of salicylic acid, which has been used for many years against fever. In addition, salicylic acid has an astringent and toning effect. Acetylsalicylic acid is found, for example, in the painkiller aspirin. The Bach Flower Essence Willow is said to help lonely and bitter people.

The willow was considered a magical tree centuries ago. It has the ability to constantly renew, is adaptable and flexible. The willow is usually near water and water and thus in strong connection to the moon and the world of feelings. If the willow appears in the cards, then it brings you the themes of spirituality, intuition, hidden feelings, grief and disappointment.

Maybe some time ago you suffered a loss that you have not yet processed or you have a greater disappointment behind you. The willow encourages you to allow grief and trust in the healing power of your tears. You also have to allow mental pain in order to really handle it. Do you go to top-heavy and rational approach to the drastic experiences in your life, then the sadness breaks out at some point and overruns you.

The willow shows you that in every end, every loss and every disappointment there is also a new beginning. With the willow, you can make the desert fertile. Give room to farewell and pain, but also let the new things grow, nourish them and let them grow. Only then do you find balanced emotions.

The new, which wants to be born, can come to you in many ways: quite literally as pregnancy and new life, but also as a new birth of yourself after a collapse, as an original or creative idea that matures within you, as an important decision wants to be taken. The willow teaches you not only to welcome new things, but also unfamiliar or different.

Take also impulses and suggestions that seem strange to you at first. The fact that you open yourself to them does not mean that you cannot refuse them in the end.

If the willow appears on your head, she may want to tell you that in recent times you have let yourself fall into your feelings too much. It is perfectly fine to allow emotional pain and also to let go for a while to process things properly. But you should not lose contact with reality and the outside world. Maybe it will help you not to bury yourself too much in your feelings, but to talk to others about it.

Perhaps you are currently getting into something that, with a little distance, is not as big as it currently looks to you. The willow on the head can also mean that you have offended someone who wanted to help you. Do not try to solve everything by yourself, sometimes you can move faster if you allow outside help.

Salix is ​​a genus of plants belonging to the Salicaceae family. This includes about 300 species of trees and shrubs, generally deciduous. The Willow, originating in Europe, Asia and North America, can reach 20 meters in height. Find its natural habitat in wet and cold areas.

Characteristics of the Willow

Its branches are flexible while its narrow and long leaves appear of a particular silver-green color, especially in what is commonly called weeping willow. A peculiarity of this tree is that it produces fruits that, once they are rapidly ripe, fall to the ground giving the feeling that the tree has been freed prematurely.

The first information on this elegant plant comes to us from ancient Egyptian texts dating back to the II millennium BC. Hippocrates, however, in the fifth century BC described for the first time its anti-inflammatory and pain-relieving properties.

Indeed, modern biochemistry has confirmed that this tree contains salicin. This substance is used for the production not only of anti-inflammatories, but also of antipyretics and anti-rheumatics.

Although we are not in possession of much documentation, it seems that the leaves and bark of the willow were used by many populations (perhaps even primitive) both for the production of tools and for medicinal purposes. News of the healing powers of the willow have also been found in documents of medieval origin.

Meaning and symbolism of the Willow

The term willow has Celtic origins and its meaning is “near the water”. Both from a purely symbolic and natural point of view, the Willow is strongly linked to the element of water and the magic inherent in it.

For the Celts in particular and for other peoples in general, the Willow was considered a female deity and its cult, linked to the lunar cycles and fertility, always held great importance over the centuries.

Still in the tradition and culture of the Celts, this tree was considered, in the arboreal zodiac, the 5th tree of the year and included the period of the Calendimaggio.

This period fell between 12 April and 15 May. Among the Druid peoples, on the other hand, the wood of the willow was used for the construction of musical instruments. With the branches, instead, they made the baskets used during the sacred rites to deposit offerings. In ancient Greece the Willow was considered, par excellence, the tree in connection with the afterlife.

This is due to the ease with which the branches, once broken, regenerate and grow again. For the Jewish people, the willow were instead considered a trees that had the power to propitiate the rain and was worshiped as everything related to water. Among the Mesopotamian peoples, the willows were used to soothe fever and rheumatism.

In Rome, instead, the branches of willow (wicker) were used for the manufacture of baskets. In Britain the Willow was linked to the world of witches.

The Willow has many different symbolic meanings. It represents the tree of life and a symbol of longevity. In Japan, the willow was considered the embodiment of sweetness and grace. In China, willow has also become the personification of spring, female beauty, the joys and sorrows of love.

Furthermore, he is given the ability to ward off evil spirits. The followers of Taoism see the willow as an example of patience, kindness, flexibility. The negative symbolism of the image associated with the concept of the willow is pain and mourning (the image of a weeping willow in folklore), weakness in general. The Jews believed the willow as an embodiment of adversity, the ancient Greeks instead as a deity associated with the underworld and death.